Once again, everybody around the world finds themselves encompassed in the spirit of Christmas, a time of celebrating time-honored traditions, spending time with loved ones, and exchanging gifts.  The last aspect is one many look forward to, since we never know what we're going to receive.  It could be a new gadget, clothing, money, or an animal, if so, did you to check to see if there were any rules to remember or follow?  You better make sure, because as our hero of this movie learns, sometimes not remembering rules can lead to unintended consequences.  This is Gremlins.

(WARNING: MAJOR SPOILERS ARE AHEAD) Billy Peltzer (Zach Galligan) is a young man living a good life, he has a job at the bank, a friendly co-worker, and a mom (Frances Lee McCain) and father (Hoyt Axton) he returns to every day after work.  His father, an inventor, has been out of town trying to get his inventions sold to potential investors, even if they aren't exactly perfect.  When he arrives home, he has with him something wrapped up in a box, something alive.  It's a gift for Billy, and after its unwrapped and the box opened, an unusual furry creature pops out.  The creature is a Mogwai and as the father tells Billy, there are three rules that must be followed.  The Mogwai can't be exposed to bright light, especially sunlight, which will kill it, the creature can't get wet, but most importantly, it must never be fed after midnight.

Luckily for Billy, the Mogwai, referred to as Gizmo, is very friendly, but during the next day, when Billy's friend Pete (Corey Feldman) comes over to his house, he accidentally spills water on Gizmo.  This mistake reveals that spilling water causes Gizmo to spawn more of his kind, which initially thrills Billy and his dad, but Billy realizes that the other ones aren't as friendly as Gizmo.  In fact, the creatures have ulterior motives, and one night, they cut the wire to Billy's clock when he isn't looking, tricking him into thinking it's still before midnight.  The next day, after he fed them some chicken, all of them, save for Gizmo, are in cocoons, as is the Mogwai that was left with his former middle-school science teacher. 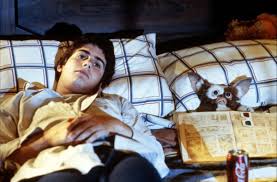 While Billy is at work, the father out of town, the mother in the kitchen, and the teacher educating the students, the pods hatch, revealing grotesque creatures.  When the students have left, the one with the teacher kills him, and the others at home torture Gizmo before spreading out around the house; fortunately, the mother dispatches most of them, but is attacked by a straggler, which Billy kills in the nick of time.  The last one, called Stripe, escapes to the local YMCA, and despite his best efforts to find and kill the monster, it jumps into a pool, resulting in a massive horde of Gremlins that threaten to overrun the town.  With no other choice, Billy, with the assistance of his co-worker Kate (Phoebe Cates) have to find a way to stop the vicious monsters.

One of the many reasons this movie works as well as it does is how it's essentially two diffierent films mixed into one.  The first half focuses on Billy living out his life in the humble town of Kingston Falls, even with the presence of Gizmo, the film gives off a feel-good vibe that settles the viewer into a false sense of conformity.  However, once the Gremlins come into play, the movie reveals its true identity, a horror film which balances scares with laugh-out loud comedy.  Gremlins builds suspense well, keeping the monsters a mystery as to what they're like even after they hatch out, and not until the scenes at the school and Billy's house are we revealed their true forms.  Granted, such a bait-and-switch method is bound to scare younger viewers, it did for this one way back when, but the fact that the film-makers handle it so effectively is something older people can appreciate the film for.

Even though the movie is focused on the humans and their endeavors to stop the Gremlins, Gizmo and the titular monsters are too their own fleshed-out characters.  Gizmo can clearly understand what people are doing and knows about the rules and their repercussions, hence his looks of sadness and worry when the new Mogwai spawn and eat after midnight later on, but unlike those Mogwai, he doesn't create problems for his owner like the others do.  In fact, he is the real hero of this picture.  After Billy and Kate get rid of the Gremlins by blowing up the movie theater via a gas leak, Stripe is revealed to have avoided the blast and retreats into the department store he was at to try and find another source of water, which he does in the form of a fountain.  As he starts to multiply, Gizmo shows up and opens a panel, shining light into the room and killing Stripe. 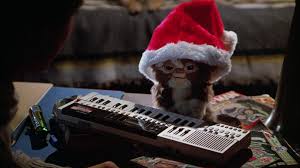 Then there are the Gremlins, as we learn, they're not evil, just rebellious and anarchic, and who greatly enjoy doing what they do.  They also have a strong sense of humor, which is noticeable during scenes set in a bar and a movie theater, as the film shifts from one shot to the other showing the Gremlins partaking in cards, getting drunk, or trying to encourage other Gremlins that are feeling a little blue.  When they head to the movie theater, their behavior is more akin to a large group of rowdy little kids, kids with sharp teeth.  They also enjoy torturing humans for their entertainment, such is the case with an old woman named Mrs. Deagle (Polly Holiday).  In one of the film's highlights, she gets flung out of her two-story house by a deliberately short-circuited chair.

But what about the people who find themselves contending with the little monsters?  They too are equally memorable.  Billy Peltzer is a solid protagonist, the way he treats Gizmo is similar to how most individuals would treat their own pets.  He clearly enjoys his bizarre, new animal and never intentionally breaks any of the rules, they're just accidents that result in unintentional consequences.  Thus, he realizes that it's his job to get rid of what he accidentally caused.  The other characters are memorable, from the xenophobic but funny Mr. Futterman (Dick Miller) to the snarky bank assistant Gerald (Judge Reinhold), the writing and strong performances guarantee that each individual is memorable in their own right.

Yet, there are two amongst the multitude of characters that stand out, Mrs. Deagle and Kate.  The former because she is a female Mr. Scrooge, she shows no sympathy for those in need, or for most of the town's populace, and she's not afraid to threaten those who get in her way, such as the Peltzers' dog, Barney, who Mrs. Deagle promises Billy that if she got her hands on, she would submit him to a slow and painful death.  Granted, her overall relevance to the plot is minimal, it's hinted early on that she plans to do something to the town, but it's never specified what it is.  This sub-plot and its respective scenes were left on the cutting-room floor, but her death is still one of the most satisfying, if not funniest, in all of cinema.  As for Kate, she stands out for one reason, aside from being played by Phoebe "Moving in Stereo" Cates.  Later on, she gives a monologue in the trashed bank explaining why she doesn't like Christmas, which is because her father died while trying to come down the chimney dressed as Santa.  This explanation is not only sad but the tone of the entire sequence is a huge contrast from what's happened prior and what happens later on, which is why this scene sticks out, but in a good way. 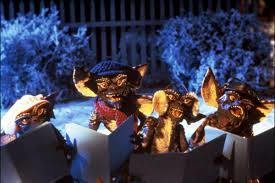 There's no arguing that the effects of Gremlins have held up well, even thirty-two years after its original release.  The puppetry and animatronics for Gizmo and the Gremlins give the sense that these are legitimate creatures running around and interacting with the cast, something that CGI, no matter how fantastic it looks, could not capture the same feeling of.  Not a single frame featuring any of the monsters looks dated, which is impressive in its own right.  What also helps bring the movie to life is the soundtrack, composed by Jerry Goldsmith.  Each instance of music perfectly encapsulates the mood of the current scene, whether it's the cheery, whimsical tracks heard in the opening scenes set in Kingston Falls, or the chaotic sounds of the music that reflects the anarchy being caused by the Gremlins.

Gremlins is a movie that everyone, no matter how old one is, can be enjoyed time and time again and still remain excellent.  It misleads the audience, but in a way that still keeps them engaged even after the film's true nature is revealed.  Also, like all Christmas moves, this one has a message, one that tells us that what we receive should always be handled with care, because it can sometimes result in unexpected repercussions.