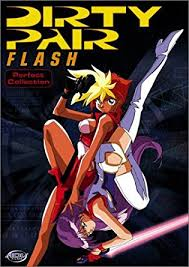 Whenever a company reboots or announces a brand new continuation of an established franchise that features changes in how the characters are portrayed or look, the reactions are often split across the board.  Some will approve of the new approach, but others, especially long-time fans, will cry foul over the decisions made and claim that it is the end of days for the particular series.  2016 has been a testament to the notion, from Paul Feig's all-female reboot of Ghostbusters to Jared Leto's Joker in Suicide Squad, you couldn't go ten feet without seeing a comment or post about how these alterations could spell doom.

Anime tends to skim by such controversy with relative ease, as many established properties frequently see new spin-offs and interpretations announced almost on a daily basis.  Similar to other mediums, not every show works out for the better.  Dirty Pair Flash, a reboot of the original Dirty Pair series, is an OVA that has frequently been met with mixed opinions, some like it, others don't.  For the uninitiated, Dirty Pair, regardless of the television show, OVA follow-up, or multitude of films, follows a pair of women known as Kei and Yuri, who are trouble consultants for the futuristic 3WA, a galactic law enforcement organization tasked with keeping the peace.  While Dirty Pair Flash retains the same concept, the difference is that the titular duo is younger and have just started working for the 3WA.

Dirty Pair Flash is a sixteen-episode series split into three arcs, each one with their own storyline.  The first arc follows Kei and Yuri, two girls who have been partnered up together at 3WA as trouble consultants, neither one likes working with the other, but they must learn to put aside their differences as a man named Waldess plans on unleashing Lucifer as a means to purify the galaxy.  The second arc sees the pair working with a computer expert named Touma who has been assigned to investigate reports of a virus implanted in the mainframe systems of Worlds' World, a full-scale recreation of life in the 20th century that encompasses the entire planet it was created on.  The third arc has no overarching plot, and instead follows Kei and Yuri on various missions that see them contending with a young assassin in training, a corrupt man who runs illicit operations and is involved in a volleyball tournament, plus a parolee who takes over 3WA headquarters as a means to get revenge on Kei and Yuri's boss, Poporo. 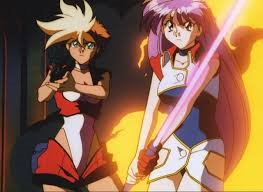 Of the three arcs, the first is the strongest as it balances the fun and chaotic action the franchise is known for with a serious-minded story involving a plan that threatens the entire universe.  It also features much character development for Kei and Yuri, through many trials, they learn co-operation is key in all scenarios.  While Waldess makes for a decent antagonist, his hired assassin, Lady Flair, is much more interesting.  For starters, this quick and nimble hitman makes for an intriguing foil to Kei, who's encounter with the woman leads her on a foreboding trail as her obsession with Flair costs Kei's job with the 3WA.  Eventually, she learns that if it is taken too far, Kei might become the one thing she is trying to stop, and as things progress, we find out that Flair was involved with the 3WA, but why she left is best left untouched.

Although quite satisfying, the following one is the weakest and most disappointing of the three.  The concept is promising, having the two contend with fighting crime in an era that is out of touch to what they know about society, but instead, it falls flat on its face.  Many of the scenarios are often boring and not memorable, with the most prominent example being the seventh episode, second in this particular arc.  In it, Kei and Yuri have been sent to a boarding school on the planet since their hotel room was destroyed in the previous episode; when they arrive, the students tell them he place has been experiencing supernatural activity, which they are dubious about.  It sounds interesting, but the reveal and build-up leading up to it has all of the intensity of a Scooby-Doo plot; in other words, it's a hoax.  The best of the five is when they encounter a former 3WA member-turned-con-man named Colby, voiced by Spike Spencer.  As they find out, the man is quite adept at what he does, and Colby easily dupes Kei and Yuri out of their restrain on many occasions, only to get involved in a pratfall that prevents total escape.  This one is easily the funniest of the entire series, largely due to Colby himself, and Spencer's performance.

Though the middle arc ends on an anticlimactic note, the last arc is a step-up from the previous one in many regards.  Since there is no ongoing narrative or recurring characters to worry about, each episode has a self-contained plot, all of which are quite inventive.  The best one is the starter episode, in which a plane Kei is on gets shot down and the only survivors are her and a baby, who is revealed to be the son of a diplomat that recently passed away; therefore, Kei has to ensure the infant's safety as she evades the terrorists that are on the hun.  What stands out the most in regards to this episode is that it is largely focused on Kei, with Yuri only making a couple of brief appearances, as she has to learn and care for the baby.  This also makes many of the action sequences more harrowing, considering who she has with her.

In spite of some of my praise for the leading protagonists; in actuality, this new incarnation of the Dirty Pair is more hit-and-miss compared to the original Kei and Yuri.  With the former, they may have had a penchant for causing lots of property damage, often unintentionally, but they were also smart and fun, in addition to being very attractive.  Granted, Dirty Pair Flash retains the destructive aspect of Kei and Yuri, but in trying to give them their own personalities, the end result is that they often come off as arrogant and occasionally stubborn.  Even after the two have learned about the values of teamwork, they frequently engage in argumentative and violent confrontations, making them more like a bickering couple rather than a pair of justice-deliverers.  Keep in mind, they're not terrible, and as mentioned before, both of them get their chances to shine throughout, but in beween those are several moments which often make the protagonists a chore to sit through and watch. 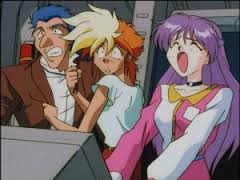 Aesthetically, Dirty Pair Flash boasts solid animation that still holds up, but the art style is clearly a product of its time, as Kei and Yuri's designs, and all character designs in general, reflect the "extreme" nature of the '90's.  Not to mention, the two leading ladies now have transformation sequences that see them switch into their battle attire, which also doubles as their work clothes, and when these moments do happen, they often come out of nowhere and it fells like the creators only did this because of its popularity in the magical-girl genre of anime.  Also, there are the occasional dips in visual quality, especially during the episode with Colby, which features rather grotesque exaggerated faces.  Though not one of A.D.V. Films' strongest dubs, the voice acting is fine and Kei and Yuri's voices fit their respective personality types.  The one performance that doesn't gel is Jason Douglas and his performance as Touma.  Normally, he plays characters featuring brash and tough personalities, including Leon from Bubblegum Crisis: Tokyo 2040 and Krieg from Borderlands 2, so hearing him voice a soft-spoken hacker seems out of place compared to what he's done prior and now.

Dirty Pair Flash is the very definition of a mixed bag.  When the show hits, it's something that can be viewed as entertaining and a worthy follow-up to the original Dirty Pair, but when it misses, it's flaws hold it back from being truly good, largely due to the inconsistent quality of the three arcs.  As best summarized by the Chief at the end of episode six in the series, "You know, those two girls aren't so bad after all."