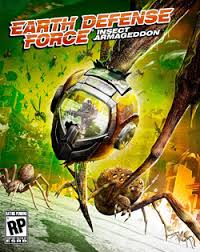 Over the course of this year, I've revisited many titles originally reviewed in 2014, offering updated and much more thoroughly explained opinions on the games covered back then.  The last game to be reviewed in this series is one that holds much personal significance; in 2011, I officially leaped into the seventh generation of consoles when I received an Xbox 360 for Christmas.  The two games I asked for?  Destroy All Humans: Path of the Furon and Earth Defense Force: Insect Armageddon.  The choices might seem odd, but at the time, I was rather obsessed with the former and after reading about Earth Defense Force in different issues of  Game Informer, I figured this then latest entry in the franchise would be a good starting point.

At an unspecified point in the near future, the Earth is once again dealing with an invasion from the Ravager species.  This invasion is much smaller, however, as the aliens have set their sights on New Detroit, which may or may not have been built by OCP.  To combat the encroaching threat, the Earth Defense Force has been deployed across the town.  One of the units out on the field is the Lightning unit, headed up by Lightning Alpha; by working together with the fighting forces, Lightning and the Earth Defense Force might a chance at fighting off the Ravagers, or not.

Like other titles in the series, Insect Armageddon's story is simplistic and uncomplicated, yet the cheesy nature of the events happening is toned down in this installment.  The general tone makes this game feel more like a summer popcorn flick rather than a low-budget B-movie; in other words, the action is intense and fun, with multiple firefights pitting you and your squad against swarms of giant insects, robots, and gunships, but the campiness of it all is lost in exchange for a more sophisticated nature.  That's not to say it is completely gone, certain aspects, such as the dialogue, retain the over-the-top nature found in the likes of Earth Defense Force 2017 and 2025, but the lines elicit a different type of humorous reaction, one of genuine laughs, rather than unintentional ones.  One other thing the other two titles did well, establish their universe through radio chatter, is also lost here; the conversations heard in each stage make it unclear as to how many times the Ravagers have invaded Earth, and whether this invasion is part of a large-scale attack. 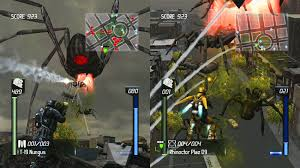 Earth Defense Force: Insect Armageddon retains the core concept of the series: shoot and blow up giant bugs and robots with big guns, but how you go about it is different from other entries.  To begin with, there are multiple character classes to choose from, each of which has their own abilities and advantages.  The classes are the soldier, tactical, flight, and battle armor; the soldier is the standard EDF soldier, and though he has no special abilities, he has access to all weapon types.  The tactical class is similar to the soldier in design, except this class is one that deploys turrets, mines, and radars to even the odds.  The flight class is very much like the Wing Diver of 2025 in that it is capable of flying and its weapons are energy-based.  Lastly, the battle armor is all about heavy artillery, and he is equipped with a shield that can block enemy attacks.

Each is class is fun to use and unlike in Earth Defense Force 2025, the tactical and battle armor classes are useful in both single-player and multiplayer, not just the latter.  However, how you make these classes more powerful is very different in Insect Armageddon.  Every unit has a maximum amount of health that can be replenished by dropped health packs, and new guns can be acquired from fallen enemies, but a level-up system is how you'll obtain most of your weapons, as higher levels feature better firearms that can be purchased with points obtained during the campaign.  The stages you'll have to complete in order to obtain currency/XP have also received a change in structure, even if the changes do lead to major problems, but more on that later.  Each level now features objectives to complete, which generally involve killing all enemies in the current zone of the stage, planting charges on anthills and other structures, or activating a transponder beacon found on a crashed dropship. 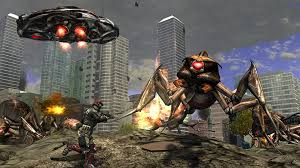 Unfortunately, this design choice amps up one of the problems that has persisted throughout the series: repetition.  Instead of each stage taking five to fifteen minutes to beat, they now last fifteen to thirty minutes; as a result, the usage of objectives can make the act of killing ants, spiders, and robots not only repetitious, but also boring.  Plus, the game is criminally short, a first-time play-through will only take three to four hours, and how much you'll want to replay the campaign with the different classes and on higher difficulties is hindered by the number of stages, as the game has only fifteen total that are spread across three acts.

On the flip side, the selection of enemies you'll face are varied.  Besides the giant ants and spiders, which later come in metallic covering that makes them harder to kill, there are the returning Hector robots, gunships, and dropships which come in new variations and adjustments in how they're defeated.  Also, the vehicles in Insect Armageddon handle much better that the ones in Earth Defense Force 2017, and the introduction of a sprint and dodge button makes traversing the wide environments and evading enemy attacks much easier to do.

Visually, the game is a step up from Earth Defense Force 2017 in terms of quality and performance.  The graphics have more polish and the framerate is stable a good portion of the time.  Yet the look and design of the environments is generic, since the game takes place in different sections of one city, the locations blend together and none of them, save for a few, stand out from one another.  Fortunately, there aren't as many glitches as there were in Earth Defense Force 2017, save for the occasional bug that may or may not leave you speechless.  The voice acting is competent and as stated earlier, the one-liners spouted by your allies are funny, just not in the same way that the ones from Earth Defense Force 2017 were. 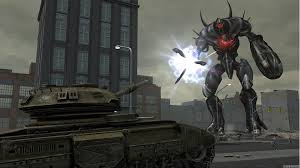 Earth Defense Force: Insect Armageddon retains the fun offered by other installments and it has a lot of great ideas to flesh out the gameplay.  At the same time, however, it lacks the scope and charm of Earth Defense Force 2017 and 2025, and certain quirks the game has dilute some its entertainment.

This marks of the end of Revisited, although there were some titles left that I wish I could have re-reviewed, including the Dead Rising games , save for the third installment, and Grand Theft Auto III, its best not to dwell on the past too long and instead look ahead to what's in store.  Also, I recently contributed a submission to Cubed3's Top 20 Wii Games, the entry talking about one of my favorites, No More Heroes.  Here is a link to the countdown: http://www.cubed3.com/news/26898/1/wii-10th-anniversary-cubed3s-top-20-games.html
Posted by William Lowery at 9:36 AM