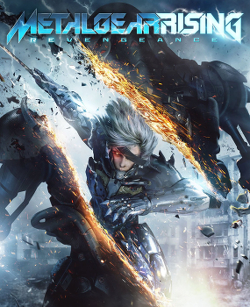 With every long-running franchise that exists today, a general consensus is abound to arise as to what is expected from that given property.  Grand Theft Auto: open-world mayhem charged with much satire, The Legend of Zelda: dungeons and fantasy, Metal Gear Solid: tactical stealth mixed with philosophical discussions of anything and everything.  Yet, there are times when the creators decide to branch out and experiment with different ideas to see if they work, such is the case with Metal Gear Rising: Revengeance.  Initially starting development under the team for all Metal Gear games, Kojima Productions, the project shifted over to Platinum Games due to the studio's lack of experience with the genre they were focusing on  Instead of featuring the methodical stealth the games are known for, this spin-off is about pure, high-octane action.

Set four years after Metal Gear Solid 4, Revengeance follows Raiden, the protagonist of Metal Gear Solid 2, who is currently on assignment protecting an African senator.  Unfortunately, the mission is botched when the senator is kidnapped by the Desperados, a rogue private military company led by Samuel Rodriguez, and when Raiden tries to save the senator, he is killed.  Worse, when Raiden tries to go after and stop Rodriguez, he is nearly killed and the group escapes to terrorize another day.  After this incident, Raiden is brought back into action with a heavily augmented body that is more agile and efficient compared to his original cybernetic body.  With a goal to get revenge on Rodriguez, Raiden sets out to dismantle the Desperados and their diabolical plans, plans which involve harvesting the brains and organs of young children with the purpose of turning them into cybernetic soldiers.

Whereas the stories of prior Metal Gear games were in-depth, philosophical affairs that tackled multiple issues within lengthy cut-scenes, Metal Gear Rising: Revengeance is a more scaled-back endeavor.  The themes explored during the narrative extend to how far cybernetic implants should be taken and the morality which arises from this matter, as well as what constitutes a good society, which comes into play late in the game.  Additionally, the cut-scenes are generally quick and to the point, with lengthy ones few and far between.  Metal Gear Rising: Revengeance is akin to a summer blockbuster, heavy on the action and spectacle, but light on subtlety.  It sounds like a detriment, but this and the game's over-the-top nature help this title stand apart from the other entries as its own entity. 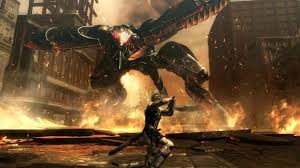 Eschewing the stealth focus of the Metal Gear Solid titles, Metal Gear Rising: Revengeance is a fast-paced, hack and slash title that lets you feel what its like to be an unstoppable cyborg ninja.  Raiden is capable of slicing foes with finesse and efficient timing using a slew of attacks and combos; initially, Raiden only starts out with just his sword, but as he eliminates the Desperados, he can acquire their weapons for usage later on.  By acquiring credits, or BP, you can upgrade Raiden, his unlocked weapons, and buy special outfits to wear during the game; in order to get the most BP, however, players will have to get good at properly timing attacks, dodges, and unleashing his special ability.

Though the gameplay follows the same beats of other genre titles such as God of War and Bayonetta, one mechanic that helps the title stand out is blade mode.  By holding the left trigger, time slows down, allowing Raiden to more fluidly cut his foes, and if you slash a bad guy in a certain spot, he can perform a Zandatsu, which involves yanking an enemy's energy source out and harvesting its power.  Larger and armored enemies require more abuse before they can be sliced up, but successfully using this ability is satisfying.  Equally satisfying are the boss fights, which often require memorizing their attacks in order to determine when and where to strike.  For example, in the boss fight against Desperado teammate Sundowner, he frequently puts up a shield that must be sliced in a certain direction via blade mode in order to expose him to your attacks.  These encounters are often large in scale and rather challenging, yet equally rewarding at the same time. 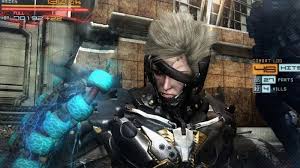 While Metal Gear Rising: Revengeance is thoroughly entertaining, certain gameplay mechanics occasionally detract from the thrill of it all.  Even though you are constantly facing enemies head-on, there are times when the game forces you into using stealth; it's understandable that Platinum Games would try to keep this aspect of Metal Gear intact, but the stealth feels tacked-on and can be frustrating to pull off due to the finicky nature of the context-sensitive attacks.  More annoying, however, is countering attacks.  In order to counter a foe's move, the analog stick must be moved in a certain direction while pressing the primary attack button, but the input often fails to respond, which means taking damage and losing the chance of a high rank once the fight is over.  Lastly, the thrill and rush of Metal Gear Rising ends too soon, as the game only lasts around four to five hours.

From a technical standpoint, the game runs smoothly and the visual style is both energetic and bland.  Character models and environments look solid, but the stages, ranging from factories to cities to military bases, all look generic and are rather unmemorable.  Meanwhile, the voice acting is good, with the over-the-top performances of the Desperados standing out as the highlight, and the music is an interesting mixture of slow, orchestral beats and fast-paced, electronic rock music which helps raise the intensity of combat and boss fights. 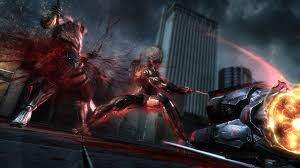 Metal Gear Rising: Revengeance succeeds in giving players the chance to feel like an unstoppable yet skillful killing machine through its frenetic but familiar combat.  It may be on the short side, but its action packed story and ridiculous nature lets us see a side of Metal Gear not seen before, one that is of pure adrenaline.