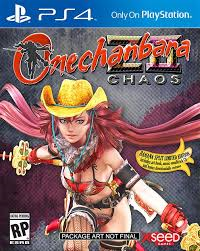 Every now and then a movie is released with a concept so ridiculous, one has to wonder what the creators were thinking when they came up with this idea.  Look no further than the Syfy Channel's Sharknado series for proof that it's possible to take a far-fetched scenario and not only make it a reality, but also a success.  In contrast, video games and their fantastical premises such as a plumber jumping on sentient mushrooms and turtles or a space marine fighting aliens are relatively tame when compared to what the film industry offers.  On rare occasions, though, a game comes along with such a ludicrous se-up that it can't help but attract the attention of the gaming community, such is the case with Onechanbara Z2: Chaos.  The premise: a group of scantily-clad women work together to fight the undead.

Throughout the history of mankind, there have been two warring factions: the Baneful and the Vampirics.  The two have frequently fought against each other to see which race will come out on top, but there has been no clear victor, as of yet.  In modern times, the Baneful faction consists of the sisters Aya and Saki, and the Vampirics consist of Kagura and Saaya.  The four are fighting it out with each other when a mysterious woman named Evangeline shows up, causing them to stop fighting momentarily.  Then, the floor beneath them crumbles, causing the group to be separated from each other.  After being split up, all four reunite and meet with Anna of the Z.P.F., Zombie Punitive Force, who informs the women that numerous zombie outbreaks have been reported around the world and must be dealt with before things get worse.  Therefore, Aya, Saki, Kagura, and Saaya head out to stop the forces of evil while uncovering Evangeline's plans for global domination. 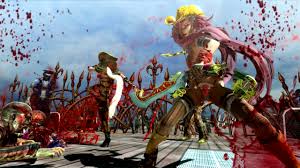 Though it has a complex backstory, in actuality, Onechanbara's story is a campy and nonsensical narrative.  As this is a sequel to Onechanbara Z: Kagura, which was never released in the U.S., the game assumes players are familiar with the events of the prior entry and it doesn't do much to explain who these characters are and why they are initially hostile towards each other.  Worse, as the game progresses, story becomes an afterthought, so events are hastily wrapped up without much build-up, yet what saves the narrative from being a total mess is the game's style and writing.  There is much creativity present in regards to the world this game establishes and the four girls are entertaining protagonists.  Although the concept might not be everyone's cup of tea, the tongue-in-cheek writing serves as a firm reminder not to take things seriously, which is reinforced by the exchangeable banter of the girls heard during each mission.

Onechanbara: Z2 Chaos' gameplay will feel familiar to those who have played a Dynasty/Samurai Warriors game, or Sengoku Basara, as the formula is similar to those titles, but its pacing and mechanics keep it from being a total copycat.  Each stage sees the player controlling one of the four heroines as they run around slashing up zombies, werewolves, and other monsters with an assortment of weapons and attacks.  Whereas other titles of this genre only let you control one protagonist throughout the campaign, Onechanbara allows players to swap freely between any of the four girls at any time, and each one has their own moves and special traits to prevent any similarity.  For example, when controlling either Aya or Saki, the two are capable of performing a counterattack when the dodge button is pressed at the right moment.  As enemies are killed, blood will fill up on their weapons, and if too much gets on there, then they can get stuck in foes; fortunately, blood can easily be sheathed off by pressing the R1 button.

Additionally, killing bad guys with the currently selected character fills up the ecstasy gauge; when filled, this allows an ecstasy combination to be released, which is a devastating area-of-effect attack.  Certain enemies, such as the mud-men, can only be hurt by ecstasy attacks, meaning players will have to make sure some energy is available if these foes show up.  There's also the stain gauge, which fills up as foes are slaughtered.  Once full, it can cause one of the girls to transform into their berserker form that's capable of annihilating anything and everything caught in their path.  The catch is that health gradually degrades over time, albeit very slowly, but there are special items that can be obtained to regain lost health or decrease the amount of blood currently in the stain gauge. 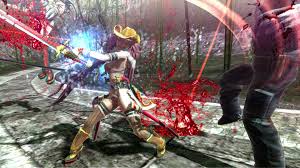 Performing well in combat and defeating bad guys will net yellow orbs, which can be used to unlock new moves, weapons, and items at goddess statues strewn about each level.  Onechanbara: Z2 Chaos is loaded to the brim with content, featuring many goods to unlock such as costumes, concept art, etc., as well as multiple modes to keep yourself busy with.  After beating the story, a higher difficulty option is unlocked to test your mettle with, and mission mode, which is the game's challenge mode, sees you completing different goals under certain parameters.

As much as Onechanbara: Z2 Chaos is a lot of fun to play, there are several glaring issues, the biggest of which is its repetitive nature.  Though the combat is entertaining, the non-stop slaughtering starts to become very routine as you progress through the story mode; also, it's easy.  While the selection of enemies is inventive and unique, most of them can be taken down with relative ease, especially when a character's berserker state is active.  The only foes that might give you some trouble are the boss fights, but even they tend to lack challenge, although the game does utilize quick-time-events rather well during these encounters, as the player is required to swipe the touch pad of the PlayStation 4 in different directions in order for the girls to turn them into Swiss cheese. 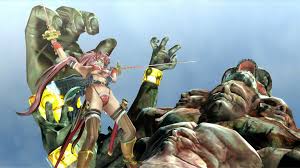 Onechanbara's sense of energy carries over into the graphics, with bright, colorful visuals and inventive character and creature designs, and the framerate stays smooth at all times, even when there is much onscreen activity.  Yet, it goes without saying that the game's blatant and shameless fan-service will not appeal to everyone.  Many of the selectable outfits are quite provocative, and with dialogue including such lines as "Stop dragging your tits around," this is one of those titles where you have to be willing to accept its bad taste, similar to House of the Dead: Overkill.  Speaking of which, the voice acting is deliberately cheesy and more the better because of it, and the music, while heavy on the techno, is quite energetic.

In many regards, Onechanbara: Z2 Chaos is similar to the likes of the Earth Defense Force series, Saints Row, and House of the Dead: Overkill in that it knows what it is and gladly relishes in its absurdity.  The game is far from perfect, as evidenced by its convoluted story and repetitious gameplay, but its frenetic, stylistic energy that permeates throughout keeps this title consistently entertaining, and the amount of content to unlock will keep you busy for quite some time.