Drive-In of Terror: House of the Dead: Overkill (Wii) 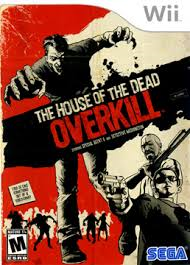 Re-invention is a method capable of breathing new life into an established series.  It offers the chance for the developer or filmmakers to try something different, while still keeping what works intact.  The horror genre, both the film and gaming representation of it, are no stranger to this idea.  Whether it was resurrecting Jason Voorhees as an indestructible super-zombie in Friday the 13th: Part VI or having Freddy Krueger trying to break out of his film world and into reality in Wes Craven's New Nightmare, experimentation with untapped concepts is a great way to keep a franchise fresh.  Enter House of the Dead: Overkill, which takes a series known for intense, on-rail shooter action, and spins it into a product seemingly rife for late-night showing at a local drive-in.

Set before the first game, Overkill follows series protagonist Agent G on his first assignment in the fictional Bayou County.  He's been paired up with foul-mouthed cop Isaac Washington to stop the criminal kingpin Papa Caesar, who has gotten his hands on a top-secret government chemical.  Said chemical is capable of mutating humans into violent individuals; in advanced stages, it turns them into beings of grotesque form.  Along the way, the pair encounter a woman named Varla Guns, who's seeking revenge against Caesar for using her brother Jasper in his research, as well as for a sacrifice he made, in which he injected himself with the chemical in order to try and stop the criminal mastermind. 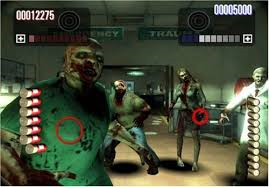 From the opening sequence that begins with an explanation of the word "overkill", to the cutscenes featuring an overly-dramatic narrator telling the player what to expect in the upcoming stage, House of the Dead: Overkill is a game brimming with style.  Taking great inspiration from drive-in B-pictures and Quentin Taratino flicks, the title, in many regards, feels like a video game representation of such works.  This is a game both ridiculous and shocking, with dialogue frequently interspersed with profanity and a late-game plot twist that reveals Caesar wasn't the mastermind, but someone else, someone with disturbing motivations.  Besides featuring a delightful narrative, the game also features two entertaining protagonists in the form of Agent G and Isaac Washington; the two are a classic buddy-cop pair, with Isaac being the loud-mouthed, shoot-em-up hothead, and G taking the position of the law-abiding individual.  Their back-and-forth banter heard during each level is great, even if most of it should never be quoted out in public.

This fifth installment in the long-running series doesn't deviate too much from its roots as an on-rails shooter.  Throughout the game's seven levels, you'll shoot mutants and other nasties in various locations including a theme park gone haywire, the swamps, and an abandoned hospital.  Additional goals, such as saving civilians and shooting golden brains, provide a way to increase your score.  Also, more points can be obtained by chaining together kills, which increases your score multiplier, with the highly coveted "Goregasm" multiplier making every kill add a thousand points.  At the end of a stage, players receive a rank based on these factors and others, as well as cash for their efforts.  The money received can be used at a shop to unlock firearms and upgrade ones currently available; initially starting off with a handgun, before long, the arsenal will grow to include the likes of shotguns, assault rifles, and a powerful magnum obtainable in an unlockable mode.

Gunplay is very satisfying, with each shot feeling impactful and suitably meaty, and ammo is never an issue as all guns have infinite ammo.  However, the diverse selection of enemies will keep gamers on their toes.  Besides regular mutants, there are ones capable of throwing knives or have been equipped with a form of defense such as a riot shield or football equipment.  Then there are the charger types, foes capable of charging and grabbing the player in order to deal damage, but a quick waggle of the remote easily shakes them off.  Although House of the Dead: Overkill is very entertaining, it is fairly easy; generally, most of the bad-guys that one will encounter can be killed with ease, and even the bosses, as freakish as they look, aren't real pushovers as their weaknesses are highlighted every time they try to attack.  Should you die at any point, you can continue, albeit at the cost of half of your current score.

Besides lacking challenge, the title is quite short.  Completing all of the stage will only take two to three hours, but there is plenty of replay value through additional modes and because the game itself is fun.  After beating the main story, Director's Cut is unlocked; the major difference between this mode and the original campaign is that each level features alternate routes the characters take, and you have three lives that are lost whenever you lose all health.  Additionally, three fun, if novel, mini-games are available to play for up to four players. 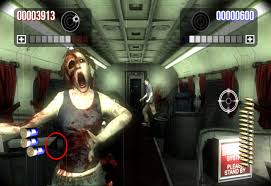 Technically, the game looks solid but what really makes the visuals shine is its overall style.  Aping the grindhouse flicks it takes great inspiration from, a grainy filter is present throughout, and during cutscenes, little touches such as missing reels, continuity errors, and the spontaneous disappearance and reappearance of characters adds to the feeling that you're experiencing low-rent schlock.  However, the lighting of some levels can make it hard to tell where enemies are, and the brief but noticeable instances of lag during gameplay are very distracting.  Sound is great, the voice acting is intentionally campy, nonsensical, and frequently vulgar, with expletives that are used as a paintbrush to make the dialogue more colorful, and the music is a fantastic mixture of old-school funk, rock, even having a dash of country mixed in.

Equal parts manic, shocking, and creative, House of the Dead: Overkill is a title that gladly revels in what it is and has no shame for doing so.  The story and dialogue will leave you laughing and your jaw simultaneously dropped, and though the gameplay is simple and the title itself is a general breeze, it is nevertheless a delightful experience.