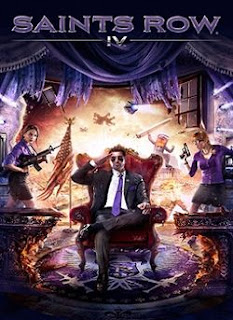 Over the course of this year, I've been taking second looks at games which I initially reviewed two years ago, and in looking at the reviews I wrote for them back then, one thing I noticed was that I tried to play the entertainment factor a lot.  It is true that your enjoyment of a work is an important aspect when critiquing, but how the game or movie fares in regards to narrative or functionality are key determinants in your overall opinion.  My original reviews of Saints Row: The Third and Saints Row IV were greatly influenced by how much I had playing those games; as a result, the scores they received were generously high.  Yet, in looking back at these two titles, I still find that both games are still highly entertaining, in spite of their flaws.

After becoming the overlords of Stilwater and Steelport, the Third Street Saints turned their sights away from those cities and to a place much bigger: the entire country.  Thwarting Cyrus Temple's plans to launch nukes grants the gang control of the White House; now, the Saints are running the entire country, but that's not necessarily a good thing.  Making matters worse, during a press conference, an alien race known as the Zin show up on D.C.'s lawn, kidnapping all of the key members of the executive branch and other individuals.  As it turns out, each person has been plugged into a simulation representing their biggest fears, and the President escapes his own nightmare only to be caught by the ruler of the Zin, Zinyak.  He decides to trap the President in a virtual recreation of Steelport, but it isn't before long that he finds a way out and back into the real world.  Unfortunately, this decision leads to the destruction of Earth; therefore, the President decides to go and rescue his comrades, while also finding a way to get revenge on Zinyak for what he did to their home planet.

If Saints Row: The Third was an over-the-top action comedy that gladly reveled in its ridiculousness, then Saints Row IV is a satire in the vein of films such as Airplane or Spaceballs.  The story freely lampoons many popular works from the science-fiction genre, as well as films and video games in general.  As a result, the jokes are fast and furious, and there are plenty of moments strewn throughout the narrative which will leave you laughing hard, such as when the President has to enter a Streets of Rage-inspired brawler to save Johnny Gat, or when in the process of saving vice president/famous actor Keith David, he stumbles across Keith's personal nightmare, which involves the cult-classic They Live.  Not every joke hits its mark, but there are never any moments that act only as a means to deliberately offend the player, such was the case in the last game. 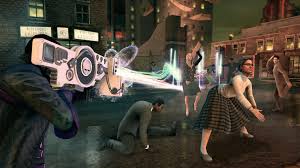 Besides poking fun at pop-culture, the writing also pokes fun at the series itself and its transition from serious to wacky.  This is best highlighted in a mission where the President saves Benjaming King, a character from the first game, from his personal fear.  Said fear involves confronting a woman named Tanya in a recreation of Stilwater, which also shifts the camera into a semi-overhead view during the mission in order to match the first game's camera perspective.  The event and King's subsequent loyalty quest highlight the shift in tone the franchise received.  While the former mission is straight and serious, the latter is quite goofy, with the President masquerading as a stripper in order to gain access into Tanya's nightclub, and at one point, he dances on stage to the tune of Robert Palmer's "Simply Irrestible."  Afterwards, he explains to an ally named Matt Miller that he had no shame in what he just did, a perfect summarization of how the recent entries relish in their fun.

On the surface, Saints Row IV is near-exact duplicate of the third installment in regards to gameplay structure.  The process of conquering the virtual city of Steelport involves completing story missions, challenges, acquiring property, and through other means necessary.  All of the tasks you complete will net you cash and experience; experience allows you to level up, which unlocks different upgrades that can be purchased with money, which is also used to upgrade your firearms and purchase clothing.  What sets this fourth entry apart from its predecessor, however, is the introduction of super-powers.  Said powers include the ability to run faster than the speed of light, jump and glide massive distances, as well as being able to throw freeze or fire blasts, use telekinesis, and unleash a super-stomp that can send people and objects flying into the air, among others.  All of these abilities can be upgraded by collecting energy clusters scattered all over the city; additionally, completing side missions can unlock alternate effects for these powers.

Being able to immobilize your enemies with a blast of ice or unleashing a wave of energy that protects you but harms those in its way is an empowering experience, even if it comes at the cost of severely reduced difficulty.  Much like in Saints Row: The Third and Gat out of Hell, the intelligence of your foes isn't that great, and the abilities only diminish the challenge even more.  Yet as a means to cover up for this issue, the game will sometimes pit you against large hordes of mindless goons or give them a special weapon that can handicap your powers.  Also, because your character is capable of running as fast as Sonic the Hedgehog and can jump over tall buildings with ease, it means there isn't much reason to use the vehicles either, except for when the mission or challenge calls for it. 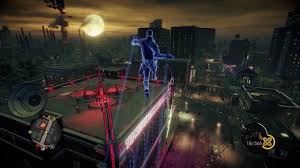 When you're not trying to stop the Zine, Steelport also features dozens of challenges to partake in; many of them are from the previous entries, but new variations have been introduced to provide variety.  For example, besides regular mayhem, there are now telekinetic, UFO, and mech-based variants of this mini-game, and Insurance Fraud is more hilarious than before since the gravity of your character is so reduced in this mode that he can go flying large distances at the touch of a vehicle.  There are also side missions to complete; each crew-member on your ship will give you a list of tasks, and the reward for doing them may be a new weapon, a new effect for one of your abilities, or a costume.  Each individual also has their own loyalty mission, and similar to Mass Effect 2, completing all of them is necessary in order to receive the good ending.

Visually, the game looks like a more refined version of Saints Row: The Third, in other words, it looks good.  Characters and environments exhibit a glossy, stylistic look which helps keep things from looking stale, but technical issues, both intentional and unintentional, are present.  Sometimes, the buildings and citizens will randomly flicker, but more hilarious is when the pedestrians start to glitch out when near a rift, as their bodies become stiff, bloated, or bug-eyed when near one.  However, there is much pop-up throughout and there is the rare chance that the game might freeze, but the framerate does stay stable, even during heated firefights or when you're running at super-speeds.  The voice acting is great and the music features some interesting selections which can make things happening onscreen much more entertaining. 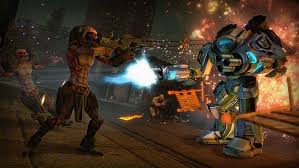 Saints Row IV is a game with no boundaries, and it's more the better because of it.  The narrative is a non-stop reel of funny spoofs and the introduction of super-powers breathes new life into the gameplay.  The experience can be repetitive and is lacking in challenge, but these don't entirely deter the sheer enjoyment offered by this product.

Posted by William Lowery at 8:24 PM