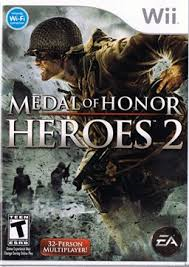 World War II is one of the most pivotal points in the history of not just America, but the world; from 1939 to 1945, many of the major nations found themselves working together to stop the rise of the malicious Axis powers, led by Benito Mussolini, Emperor Hirohito, and the most evil of them all, Adolf Hitler.  Through countless battles and thousands upon thousands of troops, this deadly alliance was stopped and peace was restored.  Since then, the entertainment industry has released countless works across the different mediums dedicated to telling and recreating the events that took place.  Video games have the advantage over literature and film as they allow people to play through the conflicts from the perspective of a soldier on the battlefield.  Many titles have been created around this war, and one of those works was EA's Medal of Honor franchise.

Set during the Battle of Cherbourg, the story follows Lieutenant John Berg, an agent of the OSS who has been assigned to investigate reports that the Nazis are developing new weaponry that could change the tide of war.  He eventually discovers that they are developing a V2 rocket capable of housing an atomic device, so John heads out to put a stop to the Third Reich's plans.

Medal of Honor's storyline squanders all potential offered by its set-up, and instead offers a paper-thin plot which remember in the slightest due to a lack of any major plot or character development.  Thus, the journey to the conclusion feels quick and abrupt.  To offer a comparison, let's compare this title with 2002's Medal of Honor: Frontline.  While both games have simplistic stories and small casts of characters, Frontline does a better job at integrating real-life events into its plot and offering clear motivations for its main character, which Medal of Honor: Heroes 2 does not do well.

Controls are an aspect that stands out due to the creative implementations of the Wii's motion controls.  Aiming and turning is handled by moving the remote, and the multiple camera and controller options available will help players find their preference of speed and precision.  Many of the actions are handled with different gestures; for example, pulling and throwing grenades is handled by pressing the A or B button and flicking the remote, and when your character is equipped with a rocket launcher, you must put the remote on your shoulder and aim the weapon with the control stick.  The best one involves using the controller as a mine detector when navigating John Berg across a minefield in two of the eight levels. 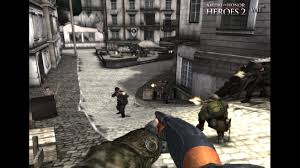 However, for every gesture or motion that is creative, there are many more which sounded good in concept, but in practice, come off as problematic.  Actions that involve twisting the remote during scenarios such as arming a bomb or wielding a sniper rifle can be annoying due to the sensitivity of the device, but the most annoying one involves the shotgun.  For every shot fired, the nunchuck must be shaken in order to pump the firearm, which is completely pointless, given how there's a selection in the options menu that disables this feature.  Yet, these fun, if flawed, controls are bolstered by a game that is quite formulaic and unspectacular.

Medal of Honor: Heroes 2's campaign primarily involves going through linear levels in which you kill group after group of Nazis while completing tasks that frequently involve plating charges on vehicles and structures, or having to fend off an oncoming horde of troops for a short period of time.  At first, the gameplay doesn't seem bad and there's an arcade-like nature to the action happening onscreen, especially when you get a headshot and a little head with an x across the helmet appears, but by the second level, the repetition starts to sink in due to the lack of variety, resulting in fun turning into monotony.

Occasionally, there are moments where you do something else besides kill Nazis, like the aforementioned minefield sequences, but these are few and far between.  Each stage features secondary objectives to complete; these normally involve finding blueprints, using a radio to contact HQ, or eliminating a specific target, but aside from earning a lower rank at the end of a level, you aren't penalized in any other way for overlooking them.  Though it might be best to accomplish these additional tasks as the game is criminally short, taking only three to four hours to complete. 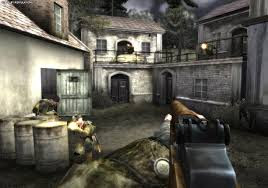 Combat is competent but largely unexciting; the selection of firearms available is standard for a game of this kind; therefore, the choices include a Thompson machine-gun, an M1 Garand rifle, an MP40, and a B.A.R. acquired in the last level, among others.  Collision detection can be questionable; sometimes it's possible to unload nearly all of your ammo magazine at an enemy, only for them to finally keel over.  Most of the time, though, taking care of Nazis is easy business due to their simplistic intelligence, but there are parts where the game will pit you against large groups of bad guys, and then the firefights become a case of sitting duck as you find yourself tucked away in one location, popping up when given the chance in order to lighten the resistance.  In some stages there are allied troops to help you, but they should probably spend more time on the firing range, given their poor aiming.

Besides the extremely short campaign, the game also features and arcade mode and a thirty-two person online multiplayer mode that has long been since discontinued.  In the former selection, you're put through on-rails versions of the levels, with enemies popping up left and right that you must shoot, as well as health packs to keep your vitality up.  Similar to the campaign, this activity is initially fun, but turns sour quickly due to the lack of replay value and the braindead AI. 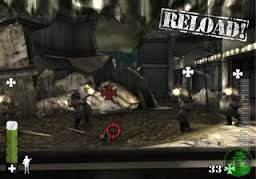 As for the graphics, Medal of Honor: Heroes 2 looks mediocre, with environments barren in design and unpleasing in style, plus simple and jagged character models.  Equally weak is the audio; the weapons sound meaty but the minimal voice acting is poor and will get on your nerves quickly due to the frequently repeated lines of dialogue.  Also, the lack of music during the levels, save for brief snippets at the start of a few, means that the firefights are not only eerily quiet, but lack the dramatic punch such parts should have.

Medal of Honor: Heroes 2 is a game that relies on a gimmick, one which involves an interesting but iffy control system; unfortunately, it's not enough to carry this title.  Lacking in narrative depth and fulfilling gameplay, this is one tour of duty you're not going to remember fondly.