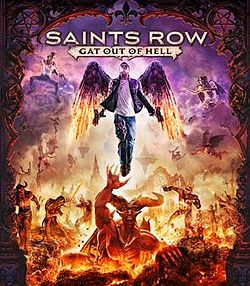 Ten years ago, developer Volition and publisher THQ introduced to the public a game known as Saints Row, a straight-and-serious open-world title; however, in the years following its release, the series gradually began to develop its own identity by putting an emphasis on pure entertainment and spectacle.  The most recent entries, Saints Row: The Third and Saints Row IV furthered this notion by featuring VTOL's, superpowers, aliens, and Stan Bush on the fourth game's soundtrack.  Yet one has to wonder where the series could go after raising the bar so high?  The answer: to hell, literally.

Acting as an epilogue to Saints Row IV, Gat out of Hell sees the members of the Saints celebrating the birthday of Kenzie Kenzington, a member of their team.  During the celebration, one of them brings out an Ouija board to engage in a game with the supernatural.  Things get unusual when the pentagram begins to move on its own, and the next thing they know, a portal opens up, sucking in the leader of the group.  As the teammates find out, the boss has been sucked into hell by Satan himself for unknown reasons; therefore, Johnny Gat and Kenzie teleport themselves into the underworld to find him.  Their search leads them to Dane Vogel, the former leader of Ultor from Saints Row 2, who informs the two that Satan is throwing a wedding for his daughter and the groom is their boss.  In order to rescue him and get revenge on the Prince of Darkness, the two must create mayhem and help out the likes of William Shakespeare, Vlad the Impaler, and Blackbeard if they want a chance at stopping the Devil. 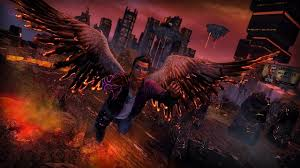 Gat out of Hell's set-up is one brimming with potential, but it never fully utilizes its concept, save for a handful of moments strewn about the campaign; in fact, story and characters take a backseat in this installment, which is quite noticeable in many areas.  For starters, a majority of the cutscenes happen in the form of storybook pages, which is initially amusing, but then one realizes that this allows the writers to easily skim over crucial information and have it explained to us, rather than actually show what's happening.  Another problem with the minuscule narrative is that character development is barely present; the game assumes you played the previous Saints Row games and therefore, should be familiar with the likes of Johnny, Dane, or the Twins from the third installment, but without such knowledge, some people might by wondering who these characters are.  Additionally, the writing is fairly weak; most of the jokes are forgettable and although hell is a setting and idea ripe with possible spoofing, not much creative liberty is taken with the locale.

As for gameplay, this latest installment repurposes a number of concepts from Saints Row IV, such as special abilities.  Each character Johnny and Kenzie meets grants them an ability; said powers include super-speed and flight, a super-stomp, the ability to summon tiny demon imps that attack nearby civilians and enemies, a protective aura, and a stone blast that can immobilize foes.  All of these abilities can be upgraded by collecting soul clusters scattered around hell, which is referred to as New Hades, and alternative effects for your powers can be obtained by approaching an altar and activating it with the required power.  Weapons-wise, most of the firearms are recycled from the previous entry, but there are a handful of new and amusing weapons.  Highlights include a grenade launcher that shoots frogs which explode when near something, an SMG that shoots locusts, and special guns based off of the Seven Deadly Sins that are obtained through hidden goals.  All firearms can be upgraded in different areas such as reload speed, ammo capacity, and damage, among others. 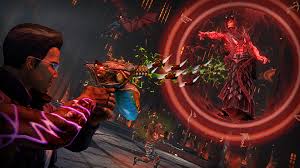 In order to get the attention of Satan, Johnny and Kenzie must complete a large slew of goals.  By causing destruction and accomplishing tasks, a meter fills up dictating the devil's wrath; as the meter progresses, he will deploy new forms of defense to try and stop the two, including missile launchers and special grenades that briefly disable their powers.  The activities and other content are taken from Saints Row IV, with minor adjustments made; for example, in Insurance Fruad, renamed Torment Fraud, you take control of the banished souls and hurl them in front of traffic in order to shed years off of their time in hell, and the towers from the fourth installment are now pits filled with nodes that must be activated in order to gain full control of the spot.  Disappointingly, the game, outside of a few sections, does not contain any real missions, as the side content is the main focus; as such, Gat out of Hell is very short, taking around four to five hours to beat.

Graphically, the engine Gat out of Hell utilizes is starting to show its age; although the city of New Hades is a place awash in fire and brimstone and the visual effects for explosions, weapons, etc. look decent, there's a noticeable fuzziness to the textures, which makes the game look more like a PlayStation 2 title.  However, it should be noted I played the Xbox 360 version, the PlayStation 4/Xbox One versions don't look as bad, but the game still looks dated, either way you slice it.  Adding to the technical inequalities are frequent audio skips in the sound effects and voice clips, and on rare occasions, the music may suddenly disappear, leaving an eerie silence.  Speaking of which, the audio is hit-and-miss; despite the presence of a weak script, the voice acting is solid and similar to Burt Reynolds' cameo in Saints Row: The Third, a well-known actor makes a brief appearance in the role of a certain almighty being; unfortunately, there are no radio stations to listen to, and the composed music is very forgettable, primarily consisting of ambient, techno beats. 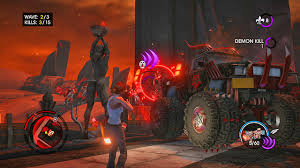 Saints Row: Gat out of Hell is comparable to getting dessert; after having two good meals in the form of Saints Row: The Third and Saints Row IV, you can't wait to see what's in store for dessert, but when you receive it, it's the steak you had prior with a few toppings on top, not only that, but its quite stale.  The series is best known for providing the best in creative, over-the-top entertainment, which this game does not deliver.