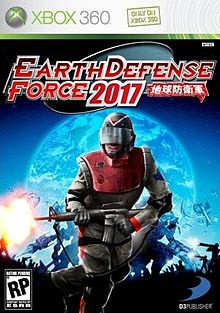 In films, the phrase "so bad, it's good" refers to any works whose poor quality elicits entertainment from the viewer, rather than frustration or boredom, such movies then earn a reputation, a cult following, making it that one title everyone should see.  The examples are vast and numerous, with movies such as Plan 9 from Outer Space, Troll 2, and Birdemic: Shock and Terror being some of the most well-known ones.  On the other hand, video games never had such a notion in their industry, until Earth Defense Force 2017's release in 2007, which made critics and gamers alike realize it was possible for B-games to exist.

2017 has proven to be a terrible year for Earth, because an alien species known as the Ravagers has shown up with the intent of destroying human life.  To combat this threat, the Earth Defense Force has been formed in order to eliminate the menace and ensure the safety of the people.  As a member of the alliance known as Storm One, it's your job to go out and shoot, blow up, and burn the invading foes in the name of Earth.

Earth Defense Force 2017 is one of those titles that does not feature a huge, sprawling narrative; instead, the simplistic set-up serves as a big excuse for the carnage that is about to take place, which works well to the advantage of this title.  Yet, the game subtly establishes its universe via the constant radio chatter heard in each mission; the exchanges of dialogue overheard help inform the player on what the current state of the Earth Defense Force is and how the fight is going on in other parts of the world. 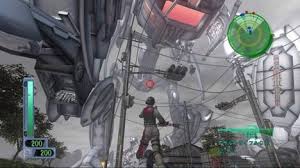 At its core, the game is a simplistic, third-person run-and-gun shooter, and the controls are equally simple; Storm One can move, shoot, and roll out of harm's way.  Each of the game's fifty-nine missions has one goal: kill all enemies; the locations and creatures may differ, but there is never once a shift in objectives, save for the levels that act solely as boss fights.  During combat, defeated enemies will drop either health, armor, or weapons; health is self-explanatory, but on higher difficulties, it's the determining factor between life and death.  Armor increases your overall health, with each unit picked up increasing life capacity by one point, so you'll want to collect as much as possible, and similar to the health pick-ups, more armor means a higher life reserve that will greatly help on the likes of Hardest or Inferno, the two highest difficulties.

Then there are the guns; at the beginning of the game, you start off with a basic assault rifle and rocket launcher, but by picking up the weapon drops, your arsenal increases greatly.  Eventually, the selection of firearms grows to include a wide variety of assault rifles, shotguns, rocket and missile launchers, sniper rifles, and best of all, flamethrowers.  Not every gun is useful as some weapons are mere novelty items, such as the blow torch, but the huge roster does encourage experimentation, in spite of a two-weapon limit.

To combat the Earth Defense Force are a varied and unique selection of enemies; each mission will see players confronting giant insects such as ants and spiders, robots armed with plasma cannons and rapid-fire machine guns, and flying drones.  Occasionally, you'll be pitted up against a boss including the likes of a giant faux-Godzilla, a four-legged walking fortress that gives the AT-AT a run for its money, or in the last level, the mother ship itself.  Additionally, the game does not hold back in enemy numbers with large swarms of bad guys that can easily overwhelm the player if they are not careful, which ensures that each firefight is fun, even if it comes at the cost of technical prowess. 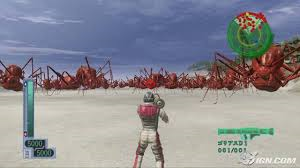 Make no mistake, Earth Defense Force 2017 is an entertaining experience; this is a title that knows what it is and delivers on its promise, but it's certainly not without flaws, of which there are many.  For starters, the intelligence of your allies and foes is quite erratic; one moment, the accompanying soldiers are killing bad guys left and right, but then one of them might get hung on the terrain or start shooting at a wall or an already dead enemy.  Speaking of which, enemies have a frequent tendency to stray from the battlefield and head off into the distance, leaving you to rapidly roll to where they are due to the lack of a sprint button.  Also, the vehicles that can be used all handle poorly, with the possible exception of the tank, yet the most egregious issue is the save system.  Instead of the game auto-saving before or after each mission, players must manually save their progress, and if one forgets to do so, then they may be forced to do some serious catching up.

Visually, Earth Defense Force 2017 is not up to par with the general quality of Xbox 360 tiles; textures are bland and low-res, and on plenty of occasions, the framerate will go from stable to barely holding when there is too much onscreen action, making you think that your console might explode any second.  Adding to these inequalities are the multiple glitches, some of which are amusing, such as the fact that when spaceships fall out of the sky, they sink through the environment rather than exploding on contact.  Another hilarious moment worth mentioning is when I noticed on the radar that a vehicle had sunk through the environment, only to end up in the sky and plummet to the ground.

However, the flip side to these technical quirks is that the poor graphics and laughable bugs exhibit a certain charm, as the large and highly destructible environments make you feel like you're on the set of a science fiction B-movie that the game takes great inspiration from.  Adding to this charm are the campy and overly dramatic voice acting and music; every line of dialogue is pure cheese, with your allies frequently spouting highly quotable one-liners including "Do you like death?  Then die!"  "Do you like the taste of my bullets?" and best of all, "EDF! EDF!" 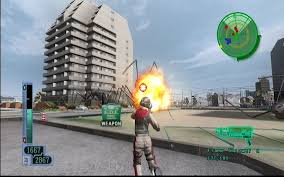 Although the multiple issues would suggest that this should be a game of poor quality, they can be overlooked as Earth Defense Force 2017 is consistently entertaining through and through.  The missions may get repetitive and the product lacks noticeable polish, but much like the films this game is reminiscent of, such flaws are diminished by the sheer entertainment offered.

Posted by William Lowery at 8:55 AM