Gamera: Guardian of the Universe Review 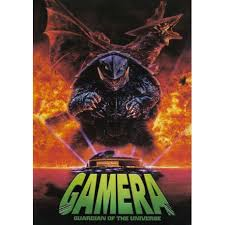 As evidenced by the prior reviews of Godzilla (2014), Godzilla 1985, and Godzilla (PS4), I am a huge fan of the King of the Monsters, and have been ever since I was a little child.  In spite of growing up with these movies, there was another series involving giant monsters that eluded me for most of my childhood, a franchise called Gamera.  For the uninitiated, the titles followed a giant, fire-breathing turtle named Gamera who frequently found himself protecting Earth from other kaiju.  Similar to Godzilla, the first film followed Gamera's rampage across Japan after being awakened by an inadvertent nuclear explosion, but in later films, the giant turtle found himself helping humanity.  Unfortunately, the later entries in the original series became heavily geared towards children, resulting in a gradual decline in quality, with 1980's Gamera: Super Monster effectively killing off the franchise.  Fifteen years later, the turtle was brought back, but gone was the family-friendly nature of earlier films, and instead, there was a more serious tone.

(WARNING: MILD SPOILERS ARE AHEAD) Out in the Pacific Ocean, a ship containing large quantities of plutonium is on its course when it suddenly runs aground.  The captain and crew members assume it may be an atoll, but then it starts to move; fortunately, the boat and its contents are not damaged.  When an expedition is formed to search for the unknown formation, one of the people on the ship, Yoshinari Yonemori (Tsuyoshi Ihara), asks for permission to join the team, which he is granted.  Meanwhile, an ornithologist named Mayumi Nagamine (Shinobu Nakayama) is working with a police unit dispatched to Hinagame Island to investigate reports of giant birds.  Sadly, they discover the village has been destroyed and everyone is dead, but they do find the creatures responsible, a flock of winged beasts known as Gyaos.  In an effort to capture the monsters, Nagamine works with the government to devise a plan that involves using a baseball stadium's lights to lure them in; then, when they take the bait, they will close the stadium's roof and capture them.  As this plot thread unfolds, the research team investigating the formation finds it, along with a bunch of mysterious beads and a tall slate with an unknown message implanted into the ground.  Soon, the mass starts to shake and the rocks fall of, revealing to Yonemori a giant creature, which makes its way towards the stadium. 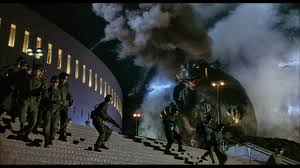 When the film begins, the pacing is quite erratic, with the movie rapidly introducing characters and plot threads that will be important later on; fortunately, by the time Gamera is introduced, the pace slows down and the film finds its right zone.  Guardian of the Universe is heavily reliant on familiar tropes in regards to characters and plot details; for example, after the stadium plan is botched by Gamera's arrival, the government officials cannot decide which one is a threat to Japan, and they consider them both hostile.  However, in spite of the familiarity present, where Guardian of the Universe shines is in its direction and tone.  As stated earlier, this is a much serious film; in fact, its quality easily rivals any of the best entries in the Godzilla series.  The human drama plays an integral part in the film, yet the filmmakers don't forget that this is a kaiju movie, and it balances out the dramatic tension with the right amount of fantasy and spectacle.

Since this is a restart to the franchise, changes have been made to both Gamera and Gyaos; in the original series, Gamera was a fire-breathing turtle who was heavy on carnage but light on backstory, but the lore this movie establishes is quite interesting.  For this one, he is the product of a lost civilization and was designed to protect Earth and keep the peace; on the other hand, Gyaos represents the society's chaotic side and the repercussions of their poor behavior, similar to the roles of Godzilla and the MUTO's played in the 2014 film. 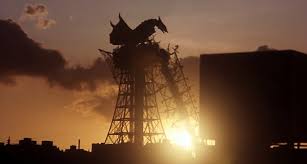 Gamera's actions also put the life of one of the characters on the line.  After the first encounter between Gamera and Gyaos, the leader of the expedition, Naoya Kusanagi (Akira Onodera), reunites with his daughter Asagi Kusanagi (Ayako Fujitani).  She receives one of the beads from Yonemori and as Asagi discovers, this forms a psychic connection between her and the giant turtle.  The catch is that when Gamera receives damage from the army's attacks or from Gyaos, she too receives the wounds, meaning she can die if too much pain is received.  This is what keeps the human story engaging, in spite of some minor issues with the plot.

As the movie progresses, the decisions the government makes come off as dumb.  Even though they believe both creatures to be a problem early on, they soon decide that the winged monster isn't much of an issue, rather, it's the turtle that can fly and shoot fireballs.  What makes this annoying is that even when the evidence starts to mount up against their belief, they still focus on Gamera.  Thus, when Gyaos shows up in Tokyo, terrorizing the populace and making a nest out of Tokyo Tower, only then do they decide to trust Nagamine and Yonomori. 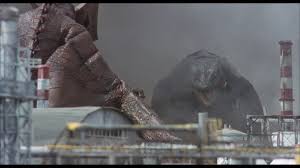 On the technical side, Gamera: Guardian of the Universe features top-notch effects work, with detailed miniature and suit effects that are a sight to behold, and it's all highlighted by the last twenty minutes of the movie, which is an entertaining climax that sees Gamera and Gyaos' final fight go all over Tokyo, both on the land and in the air, as well as briefly into space.  However, certain green-screen shots of the kaiju flying, as well as the occasional usage of CG, do look noticeably dated, but these are few and far between.  Although one would assume that the dub would be of poor quality, considering how dubs of kaiju films normally turn out, this one is surprisingly good.  ADV Films, the original U.S. distributors, practically utilize every actor the had at the time to voice both major and minor roles; examples include Tiffany Grant, Amanda Winn Lee, Paul Sidello, and Spike Spencer, among many others; thus, this is one dub of a Japanese kaiju film that won't have you reaching for the mute button.

Gamera: Guardian of the Universe takes a series that had fallen by the wayside and rejuvenates it with new life by offering a more mature storyline, while not forgetting that it's a giant monster movie through its creative and joyous fun offered by the action scenes.  The end result is a film that is easily one of the best of its kind.