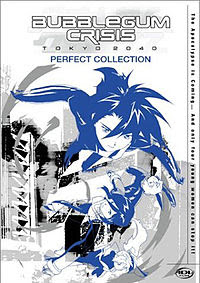 Reboots and remakes are often considered to be the death knell of creativity amongst certain individuals; they argue that taking a movie or any other work and updating it is a pointless affair since what worked in the original product is not something to be tampered with.  Although this is true with most remakes, there are exceptions to the rule, but what role does Bubblegum Crisis; Tokyo 2040 play in all of this?

Originally released in 1987, the original Bubblegum Crisis is often considered to be a classic amongst fans of anime, and its success was bolstered by the fact that it was released during the blooming period of OVA's, which are straight-to-video anime releases.  The show followed a group known as the Knight Sabers and their endeavors to eliminate machines called boomers that had gone corrupt and posed a threat to the city of Tokyo.  Unfortunately, the series never reached full completion; instead of receiving thirteen episodes as originally intended, only eight were produced, with a follow-up, Bubblegum Crash, released to provide closure to the narrative.  Nearly a decade after its release, studio AIC revived the series as Bubblegum Crisis: Tokyo 2040, a twenty-six episode television show that not only updated the look of the original title, but also gave the studio a chance to tell a complete, overarching story.

In the not-too distant future of 2040, Tokyo is enjoying a period of prosperity after disastrous earthquakes crippled the city seven years ago.  Fortunately, with the assistance of the Genom Corporation and their boomers, the city has been rebuilt and made habitable for the populace.  While this would imply everything is perfect, it's not; recently, boomers have started to go rogue and cause chaos in the city. When such incidents arise, the A.D. Police is called in to deal with the machines, but most of the time, their efforts are futile as a rogue boomer is capable of evolving into a much deadlier form, making them harder to kill.  When things seem hopeless, the Knight Sabers come in to defeat the machine and save the city, but their efforts come with hostility from the A.D. Police, who view the group as a roadblock to their efforts.  However, unbeknownst to both groups, the Genom Corporation has their own ulterior motives, with the leader, Quincy, planning to start a chain reaction of events designed to end the Knight Sabers. 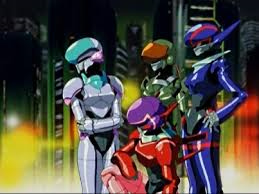 When the show begins, the set-up and narrative seem simple: boomer becomes corrupt, the police try to stop it, and then the Knight Sabers show up to defeat the creature, in between these riveting sequences are plenty of scenes devoted to fleshing out the four members, all of whom are female, as well as the secondary characters and villains.  Yet, as the episodes progress, the story gradually becomes more complex and intriguing as multiple questions are brought up regarding certain characters and their motives, and new plot threads are introduced as a result.

With a few exceptions, Tokyo 2040's characters are mostly compelling.  The four Knight Sabers, Cilia, Priss, Nene, and Linna, are all likeable and sport interesting personalities.  Cilia is the leader and founder of the group; due to reasons explained in the show, she spends most missions acting as a commander, watching and monitoring the other members and making sure everything runs smoothly, but on rare occasions, she dons her hardsuit to help the others out.  In certain regards, she is reminiscent of Bruce Wayne; similar to this established character, Cilia lost both of her parents when she was a child, her mother due to illness and her father due to his involvement with a government project that comes into play later on in the series.  As such, she has grown a hatred for boomers and forms the group in order to destroy what Genom has created.  Furthering the similarities between Bruce and her is that she has a butler who is not only reliable but frequently gives her advice regarding what she does.

Then there's Priss, the rebel; similar to Cilia, Priss has spent most of her life without a family, and this was made even more difficult by the earthquakes that happened in Tokyo.  Grown up, Priss has become a musician and is the lead singer of her own band, but in spite of her hard exterior, there is a calm personality on the inside that is exposed through the efforts of a cop named Leon, but more on him later.  After Priss are Nene and Linna; Nene is the techhead and her technological expertise comes into play frequently, she's also the youngest of the group, and her age occasionally makes her feel like she is looked down upon.  Linna is the new recruit; through a series of events, she joins the team and learns that becoming a vigilante is not easy business. 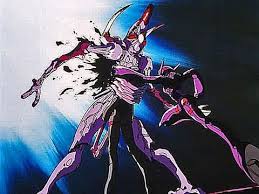 As one can tell, Bubblegum Crisis: Tokyo 2040 is reliant on familiar archetypes for both its story and characters; each team member's personality not only distinguishes them from one another but also encompasses character traits seen before in plenty of other titles, anime or otherwise.  This isn't necessarily bad as the writing is solid and as stated prior, the story is interesting, even if it does go off the rails later on in the series.

Returning to the characters, next is Leon (no, not that Leon).  Leon is a member of the A.D. Police and like everyone else on the force, he sees the Knight Sabers as a threat to their organization, not just the boomers.  His viewpoint of the group changes through multiple encounters with Priss, before long, he figures out she is a Knight Saber and later on, Leon finds himself helping the team out.  Continuing the roster, there's Nigel, a mechanic who is responsible for designing the hardsuits; additionally, he has a personal history with Cilia, since he used to work with her father back when he was alive.  Lastly, there's Maki, Cilia's younger brother; after his introduction into the cast, there's a web of intrigue built around this character as he disappeared a few years prior, only to suddenly reappear at Cilia's doorstep, but aside that, there's not much else to mention about him, other than the fact he looks like Shinji Ikari about to hit the gym; furthering this coincidence, both characters share the same voice actor, Spike Spencer.

As a whole, the protagonists are fine, but the villains are one of Tokyo 2040's weaker aspects.  Quincy, the leader of Genom, is set up to be the main bad guy, but halfway through the series, his right-hand man, Mason, betrays his boss by discovering and unearthing Galatea, a genetic experiment whose prior escape attempt prompted Cilia's father to activate a device which caused the earthquakes but killed him in the process.  Galatea, bearing a strong resemblance to Cilia, has the ability to control boomers, and her character is the penultimate decider of what direction the show would go; that is, off the rails. 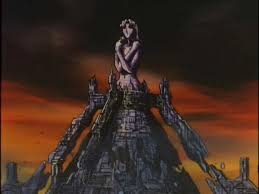 Episodes fifteen through seventeen are a strong indicator of this notion; in these episodes, the tone is less action-packed and more reminiscent of a zombie flick, as Galatea uses her powers to resurrect all of the boomers locked in storage by the A.D. Police.  This, in turn, causes them to wreak havoc on the building and the Knight Saber must work with the police to stop the infestation.  This small arc is only the tip of the iceberg as later on, Galatea fuses herself with Genom's tower, turning the facility into a giant spaceship with the intent on hijacking Earth's satellites in order to have control over all boomers; thus, our heroines, with the exception of Cilia, head into space to deal with her.  The end result is a final episode that is a convoluted mess filled with multiple cases of plot convenience and an ending that leaves the fate of out protagonists on an ambiguous note.

Artistically and visually, Bubblegum Crisis: Tokyo 2040 looks fine but its age shows noticeably in many areas.  The design of the show is good, with contemporary character designs and unique boomer concepts, but the overall quality is inconsistent; in one scene, things may look competent, but in the next there may be a noticeable lack of polish, which is especially noticeable in the stiff sequences of Priss and her band performing.  The dub, produced by ADV Films, holds up well with solid performances all-around, even is there is the occasional cheesy line of dialogue.

An interesting aspect of Tokyo 2040 is how the series utilizes music not just as tracks that play in each episode, but also as a crucial element to the style of the show.  Taking inspiration from rock music of the time as well as from MTV, the music and even the art style of the episode title cards have an exaggerated and at times, grungy feeling to them; further honing the importance of music is that the name of each episode is based off of the title of an album or song by a musician, generally ones involved with rock.

In spite of varying issues prevalent throughout, Bubblegum Crisis: Tokyo 2040 is still a solid show.  The story starts out simple but quickly becomes serious and focused as the episodes progress, even if the end result is somewhat messy, but the narrative is backed up by mostly enjoyable characters and entertaining action sequences.