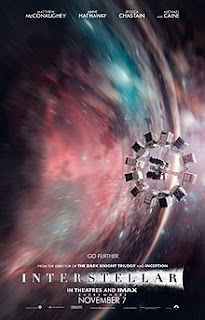 Before this review begins, two things I want to address:  1. Apologies to the minor delay of this review, a lack of motivation and will to write the review did their best to stop me, but I managed to overcome it with enough patience.  The other planned review for this month will come out later this week, and the plan is to have a perfectly running schedule for July.

2. This movie was a request from a good friend of mine, to which I say thanks for recommending this title.

Since the dawn of man, our society has had a strong interest in space and what lies in the cosmos; we ponder over whether there is life out there or not, and hope the day will come when humanity is able to colonize another planet we can call home.  Science fiction has helped fuel that interest, with plenty of titles in print, film, and other media showcasing stories of man and his ambition to explore the galaxy, hoping to discover something that may play a factor in where humanity goes.  Such works can either take a fantastical view on this concept, such as the Star Trek franchise, or in the case of Interstellar, provide a realistic, albeit more dramatic, view of the concept.

(WARNING: MAJOR SPOILERS ARE AHEAD) In the near future, humanity faces a crisis, poor environmental conditions have caused most of the food sources necessary for survival to wither and disappear, and the current state of Earth makes living on the planet a challenge to do so.  One of the inhabitants is Cooper (Matthew McConaughey), a former pilot turned farmer who raises crops with the help of his father (John Lithgow), son (Timothy Chalamet), and daughter, Murphy (Mackenzie Foy).  While taking his children to school, a drone flies pass them, and Cooper gives chase, eventually hacking into the machine to gain control of it.  He finds this suspicious as drones are no longer manufactured; meanwhile, Murphy has been decoding Morse code and binary messages left by an unknown presence, which she believes is a ghost.  These messages turn out to be helpful, as one of them is coordinates to a site operated by NASA.

Cooper and Murphy are captured while investigating and Cooper ends up in a board meeting with the group secretly running NASA, which is led by his former professor, Dr. Brand (Michael Caine).  Brand explains to him that they have been running an operation in which they send out astronauts to go and find a planet capable of supporting human life, and he wants Cooper to lead a new team that will explore the planets deemed habitable by the other volunteers, and in case Earth dies, then they one they choose can be used as a catalyst for specimens they have stored.  The catch is that the process involves using a wormhole located near Saturn to reach the galaxy where they are located, and since time moves at a different rate in space, this means that what will seem like minutes or hours on board the ship will be years upon years for the people of Earth.  When Murphy learns of this, she pleads for her father not to leave, but without much hesitation, Cooper agrees to participate.

Interstellar is not a film which glamorizes space travel; instead, the movie approaches it as a risk/reward factor.  If the crew succeeds in finding another planet, then the populace is saved; however, should they try to return, then Earth dies and more importantly, loved ones they knew will either be dead or much older.  This adds greater tension to the events happening onscreen, especially during one sequence where Cooper and two other astronauts travel down to one of the selected planets.  Their choice turns out to be a bad idea as it is entirely covered with water and there are frequent, skyscraper-sized tidal waves.  One of the members dies while fleeing the location, and when Cooper and Brand's daughter (Anne Hathaway) return to the Endurance, they see that the one who stayed behind has aged significantly since he didn't stay in stasis while they were gone.  This twist leads to a highly emotional scene in which Cooper goes through and watches all of the messages left by his children, who are now around his age.

Coincidentally, one of the key focal points in the film is the relationship between McConaughey's character and the daughter.  Cooper, despite being a farmer, is a man gifted with great intelligence, and Murphy wants to follow in her father's footsteps; when she gets older, Murphy devotes herself to finding out a solution to save the world, unaware that her father is still involved in the process.  Though she is older, Murphy is still frustrated by Cooper's decision, but as the story progresses, she realizes the significance of the choice.  At a later point in the movie, McConaughey enters a black hole and ends up in the fifth dimension, a world created by beings heavily implied to be mankind after reaching the next stage in evolution.  This, in turn, reveals to him and the audience that he was the ghost all along.  This revelation has split people, some argue that the twist makes sense while others decry it as predictable; personally, I fall in both camps.  I do agree that Cooper should be the one responsible for pulling the strings, however, the movie could have done a better job at pacing out the clues that it could be him, or try to convince us that it's someone else. 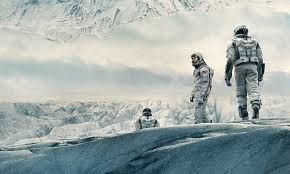 Although the film handles the relationship between father and daughter excellently, the same cannot be said about the son or grandfather.  In contrast to Cooper and Murphy, these two characters don't have the same amount of development.  Cooper's father only exists for the sake of being an additional family member, whereas the son, when he grows up, acts as a foil to Murphy's plans, and his lack of remorse for his family makes him quite unlikeable.  Due to reasons unknown, he decides to stay in the house their family lived in when he was growing up, as a result, his wife and children are put into a near-death situation as the residue from the dust storms threatens to kill them.

Following in the same foot-steps as Star Wars and other titles, Intersellar pulls inspiration from a variety of different works, most notably, 2001: A Space Odyssey.  The most immediate nods to the film are through the robots TARS and CASE, whose designs call to mind the monolith from 2001, if it was able to bend and flex into different shapes.  The usage of pipe organ in the soundtrack occasionally results in tracks that sound as if they are building up the piece that plays in 2001's final scene.  However, the biggest reference to a Space Odyssey comes from the entire sequence of Cooper going through the fifth dimension and being forced out back into space.  Although this implies that the section completely copies David's encounter with the monolith in the film's climax, the outcome and meaning of these moments is where they differ.  In 2001, David's interaction with the monolith leads him to become part of the next step in human evolution, in which he is reborn as a star child who watches over Earth in the last scene; on the other hand, Cooper in Interstellar only gets a brief glimpse at what humanity is capable of by interacting with the past, and when he is forced out of the dimension, he ends up in space and is rescued by a team with only minutes left in his oxygen.  In other words, Interstellar uses 2001 as a means of homage and to provide its own spin on a key moment from the movie. 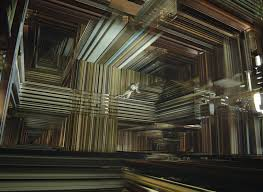 Visually, the film is quite gorgeous, excellently capturing the vast emptiness of space and its immense scale, occasionally by having the camera pull back to reveal that the Endurance is merely a small speck in the galaxy, and these moments are benefitted by the practical effects utilized.  In an era where computer-generated imagery has become the norm for creating special effects, it's surprising to see how much practicality there is in Interstellar.  For much of the movie, the ship, robots, and space itself are created with animatronics, puppetry, and miniatures, which helps give a sense of realism to these locales and characters.  There is CG, but it's primarily used to show off the gorgeous landscapes of the planets and the fifth dimension, or, if it's a wide shot, to show one of the robots moving.

Interstellar is a well-made science fiction drama that uses its human characters to create an engaging and tragic storyline; although certain characters are weaker than others, each one is supported by great acting from their respective actors.  Also, the journey the astronauts partake in is one filled with tension and breathtaking moments, complemented by the film's top-notch special effects.

Posted by William Lowery at 9:31 AM