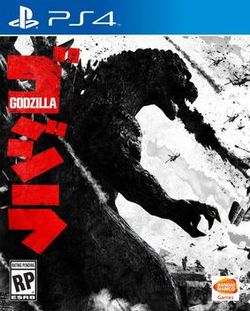 Over the past six decades, the Godzilla franchise has significantly grown since the first film was released in 1954.  To date, the King of the Monsters has starred in over thirty movies and the series has spawned a wealth of merchandise, but similar to other franchises discussed prior such as Transformers, Ghostbusters, and Batman, Godzilla has spawned his share of games uneven in quality.  Although the concept of a monster destroying a city or fighting rival monsters shouldn't be hard to translate into playable form, most of the titles released have had trouble capturing the spirit and fun of the films, with a few exceptions.  The last Godzilla game was released over eight years ago, and after it came out, fans were left waiting for another game until this title was released last year to capitalize off of the success of the 2014 movie.

Godzilla doesn't offer much in terms of plot; in 1954, atomic blasts awake a prehistoric beast known as Godzilla, who arrives off of the coast of Japan to terrorize Tokyo.  In the years since his attack, scientists have developed a renewable power source known as G-Energy, which is derived from his life vitality; of course, creating a method of clean power based off of Godzilla attracts him back to Japan in order to feed off the materials and destroy everything.  This simplistic story serves as the basis for the game's main mode, God of Destruction.

Controls are quite unique; forward and backward movement for Godzilla and other creatures is handled with the left analog stick, but to turn them, the L1 and R1 buttons must be pressed.  This set-up is mildly unconventional, but since you are controlling a giant monster, the layout makes sense and you quickly get used to it in no time.  As stated prior, God of Destruction is the primary mode of play; in it, players take control of Godzilla and other monsters in order to destroy generators and annihilate buildings and other structures in an effort to make the kaiju bigger and more powerful.  All of the levels are set up on a grid split up into multiple branching paths; additionally, said levels vary in difficulty depending on the leader currently in charge, and their viewpoint of the monster reflects how long it takes for more reinforcements to arrive.  The difficulty of the stage also determines which monster will be confronted, and the kaiju that may show up is determined by how tall Godzilla or other ilk currently are. 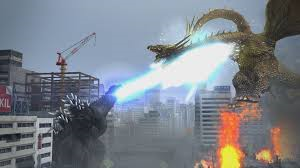 At first, tearing through buildings, the army, and other monsters is fun and true to the films this game is based off of, the military doesn't do much damage, but giant monsters do; however, as the levels progress, it quickly becomes apparent that the mode doesn't deviate too heavily from its premise.  Every stage involves destroying generators and the surrounding environment, harder stages slightly alter the conditions of beating the stage, primarily by adding a time limit, but not much else is changed.  The end result is that the mode becomes tedious to complete, especially when you have to play through the mode multiple times in order to obtain the real ending.

Unlocking the true ending requires two different things: get Godzilla up to one hundred meters tall, and find all of the data collection points.  These are scattered across each stage, and when Godzilla is in the vicinity of one, you can press R3, which shifts the camera into a cinematic viewpoint to show the army recording your actions.  Yet, this aspect of the game is questionable, why would I, the player, help the army to try and stop Godzilla, even though I'm controlling the big guy in the first place?

Besides confronting the military, whose tanks and rocket trucks don't try to move when you get close to them, there are also kaiju to fight.  To the game's credit, the roster of creatures is large and varied, and includes the likes of King Ghidorah, Mothra, Rodan, four different Mechagodzillas, three different Godzillas, and the greatest robot ever, Jet Jaguar.  Though the site of these familiar monsters and others is thrilling, that appeal quickly wears off when you realize the act of fighting these beasts is filled with various problems that drag the enjoyment down.  Combat is fairly simplistic and lacking in difficulty or balance; it's simply a matter of mashing buttons in order to unleash the monster's moves.  Though their move-lists are varied, certain kaiju utilize techniques that can be spammed repeatedly to damage opponents, which severely diminishes the challenge of these encounters, unless you are the one on the receiving end, in which case they can become frustrating to accomplish.  Another quirk that's especially annoying is that when trying to turn and charge away from an opponent, the monster may refocus themselves on the opposition and run the wrong way.  Lastly, the size of the monsters can get inconsistent, levels labeled "Hard" may pit you against fifty meter kaiju, such as Mechagodzilla or a Mothra larva, who are now comically larger than you are, even though they should be much smaller than they are now. 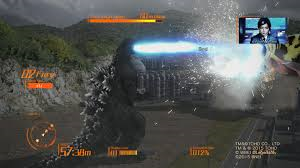 Defeating monsters and destroying generators earns the player materials, which can be used to unlock abilities and new moves for the kaiju in evolution mode.  Unfortunately, this system of obtaining materials is an archaic and complicated process since retrieving the right components may require a monster not yet encountered in God of Destruction; fortunately, there's King of Kaiju.  In this mode, players take their selected monster through six rounds against randomly selected opponents, but the materials you get by beating all rounds are not predetermined and may not relate to the kaiju you are trying to upgrade either.  In addition to these two modes, there's an online versus mode that pits three players against each other; while I have not been able to try this mode out, from what I've read, poor matchmaking diminishes the entertainment, as there's a strong chance for low-ranked individuals to be pitted against higher-tiered people who had too much time on their hands.

There is also the Kaiju Guide and Diorama; Kaiju Guide is an impromptu information source to the monsters from the Godzilla canon, and new entries are unlocked by playing the game.  Although certain kaiju are listed with inaccurate or completely made-up information, a majority of the entries are factual and each one contains interesting trivia regarding suit designs, etc.  Diorama lets you take figurines and position them to take pictures, and as the name implies, this mode is simply a novelty selection. 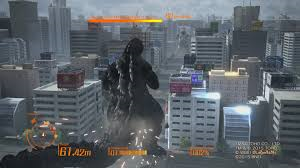 For a PlayStation 4 release, Godzilla looks and feels more like an early to mid-cycle PlayStation 3 game; although the monsters are film accurate and look good, as do the visual effects for explosions and building destruction, the environments utilize bland and uninteresting designs.  Additionally, there's a feeling of emptiness to each locale; while the game does a competent job at capturing the scale of these creatures, the lack of any other onscreen activity makes the cities and other landscapes feel barren.  Voice acting is deliberately cheesy and replicates the unintentional humor offered by the dubs of Godzilla films, but lines are repeated so frequently that you'll end up turning the volume down.  The music and certain themes recall the compositions of scores from some of the films, but aside from a few tracks, the remainder of the music is nothing special.

At its core, Godzilla does have good ideas, but the execution of these concepts is a sloppy one.  Tearing through cities and beating up monsters is mildly enjoyable at first, but the various issues these mechanics and other aspects have gradually start to seep in, resulting in fun turning into tedium.  There is clearly a love for the series present, as evidenced by the selection of monsters and other factors, but when the product isn't fun, that respect starts to lose its impact.