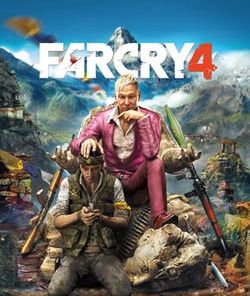 There's an age old adage known as "If it ain't broke, don't fix it", which refers to a formula that worked once before and has proven to be a useful method should a later occurrence require it.  This term can also apply to sequels in either films or video games, in which the creators take the formula that made the first installment click, and apply it again for the follow-up, making small changes and additions where needed; Far Cry 4 is a testament to that.

Far Cry 4 follows an everyday man known as Ajay Ghale; originally born in Kyrat but raised in America, Ajay has returned to the country to spread his mother's ashes, unaware of the civil war going on between the ruthless dictator Pagan Min and the resistance group known as the Golden Path.  During his ride, the bus is stopped for inspection by the Royal Army, which culminates in the bus being shot-up and Ajay narrowly escaping, only to land right in front of Pagan, who has been expecting his arrival.  At Pagan's palace, he reveals to Ajay that he is a distant relative and at one point, was engaged in a brief relationship with Ghale's mother.  After Pagan leaves, Ajay sneaks out, only to be rescued by one of the Golden Path leaders, Sabal.  Eventually, Ajay meets the other half of the leadership, Amita, and it turns out that she and Sabal have their own goals for Kyrat, which results in frequent arguments between the two.  With no other choice left, Ajay decides to help the Golden Path take down Pagan Min and liberate his grasp on the nation.

Story in Far Cry 4 isn't as strong as the narrative in Far Cry 3, largely due to the characters, starting with Ajay Ghale.  Whereas Jason Brody from the previous game had clearly defined reasons as to why he was doing what he did, Ajay lacks any real goals, and he comes off as an uninspired, run of the mill protagonist who has no qualms with helping the Golden Path and other people of interest scattered about Kyrat, regardless of the tasks he's given.  This is especially noticeable when at one point in the story, he encounters two bumbling stoners who frequently convince Ajay to take special drugs which get him into situations that put his life in danger.

Speaking of which, the other characters that encompass the story are a mixed bag.  Amita and Sabal's different ideologies lead to interesting conflicts when the two are present; Amita believes in progressivism while Sabal thinks Kyrat should stick to the traditions important to the nation.  Their conflict leads to an interesting story structure; at certain points, players are presented with one character's plans for a particular area of interest, and depending on which one you choose, the result is a different mission with either Amita or Sabal currently in charge of the Golden Path.  Another highlight amongst the characters is a gun smuggler from Africa who uses the Bible as a means to help the resistance but to also help atone for terrible deeds he did back in his home nation, which is heavily implied to be the Bowa-Seko region from Far Cry 2.

With that said, there are those who aren't as memorable; there are the previously mentioned pair of stoners, Yogi and Reggie, whose antics encompass a majority of the game's humor, but the biggest disappointment out of the roster are the villains.  Pagan Min and his fellow generals all had the potential to be interesting individuals, but said potential is wasted because for a majority of the game, these characters are offscreen, only appearing when the story says so.  In particular, the big bad, Pagan Min, disappoints the most; his actions and personality are very reminiscent of Handsome Jack from Borderlands 2, and combined with a top-notch performance from Troy Baker, the result should have been a memorable bad guy on the same level as Vaas from the previous game; unfortunately, that's not the case.

As stated in the beginning, Far Cry 4 doesn't bring anything new to the table; instead, it refines and polishes the formula established in Far Cry 3, while also adding in a host of new diversions to take in and weapons to utilize; the result is an experience still entertaining, even if it's one strewn with a strong sense of familiarity.  To free Kyrat from the clutches of Pagan Min and his army, Ajay will, among many tasks, complete story and side missions, liberate outposts and fortresses occupied by Min's troops, climb radio towers, and amass enough guns to make John Rambo blush.  In terms of control, Ajay moves with the same amount of flexibility Jason Brody did; he can throw rocks to distract enemies, utilize a camera to mark their positions, and he gains access to most of the same abilities Jason did by leveling up and earning skill points, though there are a few new techniques, such as the vehicle takedown and the ability to ride elephants.

However, some modifications have made which help differentiate Ajay from his predecessor; for starters, he can utilize a grappling hook to climb up ledges and navigate rocky terrain.  Also, players are now able to move bodies and hide them, making it easier to ensure that enemy troops don't find their fallen comrades, and two new throwing items are introduced: knives and bait.  Knives are self-explanatory, but bait, obtained from skinned animals, can be thrown to attract predators, such as bears and wolves, to an enemy's location, and it is an effective tactic when taking over outposts.

In-between story missions, gamers can explore the nation of Kyrat, which is divided into two separate regions, with the northern area becoming accessible later on in the story.  Nearly half of the tasks available to complete are from Far Cry 3, such as deactivating radio towers broadcasting false propaganda, freeing outposts from control of the Royal Army, as well as hunting, assassination, and hostage rescue side missions.  With these activities, however, come a slew of new ones to participate in.  Among these are new quests involving bomb defusals, escorting and protecting Golden Path vehicles, and missions where Ajay destroys the machines used to create posters and other tools of messaging, among others.  Besides the regular outposts, there are fortresses, harder, more complicated outposts which are commanded by Pagan's generals.  While possible to take over during the story, the difficulty will remain high if the leader of the particular fortress is still in charge, but they can be easier to take over if you let the story progress or if one is currently engaged in the game's co-op mode, which deactivates story missions, but allows players to partake in all of the other content available to do in this game.

Simply put, Far Cry 4 is as entertaining and engaging as its predecessor; in fact, compared to Far Cry 3, there's a larger emphasis on doing the tasks as you see fit.  While story missions place parameters on what you can do, such as putting emphasis on stealth over noise, all other content may be engaged by how the players believe it should be handled, such as outposts.  In the previous game, outposts were a risk/reward gamble, do you take the stealthy approach, or risk taking heavy losses by going in loud and riotous?  Far Cry 4, on the other hand, doesn't care what options you decide to take due to the large selection of guns and other firearms at hand, as well as the variety of skills to unlock that can benefit Ajay as players see fit.

Visually, Far Cry 4 looks great; the world of Kyrat is a mixture of Tibetan, Indian, and Thai cultures, resulting in gorgeous landscapes and interesting architectural designs; yet, the highlight of the visuals is the world of Shangri-La.  Accessed by discovering painting fragments scattered across the environment, gamers are transported into a world that is quite beautiful to look at with its varied bright colors and dream-like landscapes.  However, there is some mildly distracting pop-in that is very noticeable when cruising through Kyrat at high speeds or by flying in the air.  Voice acting is executed well, even if Troy Baker is severely underutilized in his role as Pagan Min, and the music is also of good quality.

Though the narrative and characters are weak, the remainder of Far Cry 4 is very fun to partake in.  While this fourth installment doesn't shake up the formula dramatically, instead opting for more of the same, the end result is a game still engaging and entertaining for both returning players and newcomers to the series.  The world of Kyrat is one filled with unique story missions and enough content to keep people playing for a long period.

Posted by William Lowery at 9:11 AM