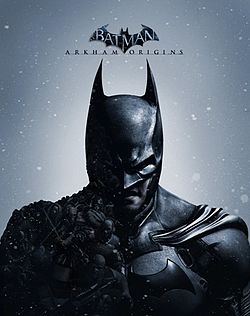 Batman: Arkham Origins is a game that holds some personal significance to me, as it was the first game I reviewed back when I started writing in 2014.  At the time, I was fresh and learning the ropes, but we know what happened and it doesn't need to be repeated again.  I knew what style of reviewing I was aiming for, which was the straight-man style; keep it honest, straight to the point, and don't take on an exaggerated version of yourself when reviewing titles.  Personally, I don't consider my first three reviews of this game, Saints Row: The Third, and Saints Row IV to be bad, but instead, mediocre.  Yet, nearly two years after initially reviewing this game, as well as coming a long way since the early days, how does the game hold up from the perspective of a stronger critic?

(WARNING: MILD SPOILERS ARE AHEAD) As the name implies, Batman: Arkham Origins is a prequel, set two years into Bruce Wayne's career as Batman; he's still learning the ropes of the mantle he has taken up, but on Christmas Eve, Bruce Wayne faces his biggest challenge yet.  A mobster by the name of Black Mask has put a fifty million dollar on Batman's head; in turn, eight assassins have to try and claim the bounty, including Killer Croc, Copperhead, Lady Shiva, Bane, Deadshot, Deathstroke, the Electrocutioner, and Firefly.  Not only that, but the police do not trust the Dark Knight and view him as a menace, making Bruce Wayne hesitant to try and work with them to stop the criminals of Gotham.

This is how the story initially starts, but as it progresses, the plot point about the assassins coming after Batman becomes a faded memory as multiple plot twists take place; while they do appear throughout the story, none of them contribute anything significant to the narrative, with the exception of Bane.  Ultimately, the concept of Bruce Wayne taking on eight assassins in his early years as Batman is an underwhelming event; fortunately, this major narrative stumble is made up by the rest of the story, which does a solid job at showcasing and developing Bruce Wayne as he comes to grips with the role he has pursued.  Most importantly, he learns that he can't handle everything by himself, and he must come to rely on the GCPD as things heat up later on.  Although the assassins don't have much room to shine, one villain who does is the Joker; halfway through the game, it's revealed that the man behind the black mask, Roman Sionis, didn't send out the bounty; rather, the Joker was responsible.  When he's first introduced, the Joker is simply looking to cause anarchy in Gotham, but after Batman firsts meets him and through additional encounters, he realizes that him and the Caped Crusader represent two sides of the same coin, with Batman representing truth and justice, and the Joker standing for mayhem and evil.

From a gameplay perspective, Batman: Arkham Origins takes a "If it ain't broke, don't fix it" approach to its mechanics and style, practically replicating Arkham City in everything from the open world to the side content to the fighting and stealth mechanics; the result is something that is still very enjoyable, but lacking in inspiration and creativity.  Combat is still top-notch, featuring a wide variety of attacks, counters, and combos to unleash on the criminals of Gotham City; on the flip side, stealth is equally intense and fun to utilize.  One new aspect introduced in this game is the grading system; at the end of every encounter, players receive an overall ranking based on how well they performed in either combat or stealth.  Though there were a few times in which I got a lower grade than I should have, despite not taking any damage and keeping a high combo, this system is fairly consistent.

Enemy intelligence is about on par with the competence of foes in the previous Arkham games, and nearly every enemy type from the first two entries returns here. Besides punching, bad guys can wield knives, stun batons, guns, and riot shields, plus there are heavily armored variants which require extra punishment before they can go down.  The only new enemy types are large, brute enemies, martial artists who can disrupt your current combo, and thugs juiced up on the chemicals Bane uses.  Unfortunately, the fun of combat is significantly diminished by way of a new gadget Batman obtains, but more on it later.  Enemies also rely on many of the same tactics used in the stealth sections; foes armed with thermal goggles can scan for Batman's presence in vents or on the vantage points, as well as use jammers to block up the frequencies of Batman's detective vision.

To help fight off the scum of Gotham City, Batman has his gadgets, most of which are taken from the previous installments, and the new ones, such as the glue grenade, and remote claw, are slight alterations of the ice grenade from Arkham City and the line launcher from the first two games, except for the shock gloves.  These gloves, acquired from a deceased Electrocutioner, are loosely based off of the B.A.T. mode from the Wii U port of Arkham City.  When charged up and activated, the shock gloves remove the strategy of combat and replace it with mindless button mashing, and any enemies, regardless it they are equipped or not equipped with a form of defense, can be harmed when they are in use.  Though the shock gloves are also used for solving puzzles and are featured heavily in boss fights, the shock gloves nevertheless double as an easy mode modifier.

In between the story missions, players can explore Gotham City and complete side quests and other diversions located within.  Don't expect to encounter any civilians, though, as they are all indoors due to a snowstorm that has swept the town, but in spite of all the thugs running loose, there's a feeling of emptiness to the city, but the Christmas décor propped up all over Gotham does give the area a false sense of security.  Side missions in this game involve disabling weapon caches the Penguin has, destroying Roman Sionis' drug canisters, and solving various crimes using Batman's detective vision, which now has the ability to fast-forward and rewind assembled footage in order to obtain additional clues, among others.  Riddler is also in this game, yet instead of tracking down trophies this time, he has data files scattered about because this is before Edward Nigma became the man who had a habit of scattering a million green collectibles around.  He's also taken control of different radio towers, and by freeing the towers of his grasp, this opens up fast travel points for Batman to use.

Graphically, the game looks good but lacks the visual polish found in prior entries.  From the buildings to the people, everything looks softer, and though the cutscenes look excellent, the in-game conversations have some stiff facial and body movements; additionally, the framerate occasionally hiccups during heated conflicts.  Voice acting and music are well-done; however, Batman and Joker are voiced by Roger Craig Smith and Troy Baker in this game instead of veteran performers Kevin Conroy and Mark Hamill, who would both return to play their respective characters in Batman: Arkham Knight.  Roger Craig Smith does a fine impersonation of Conroy's Batman, even if the Caped Crusader sometimes sounds like Chris Redfield, but Troy Baker does a near spot-on impersonation of Hamill's Joker.

Though it doesn't break away from the established formula of prior entries and instead offers more of the same, Batman: Arkham Origins is still a solid title.  The story is compelling, despite having a missed out on an opportunity for an interesting plot point, and the gameplay, while playing off of familiar beats, still manages to be fun.

Posted by William Lowery at 8:41 AM