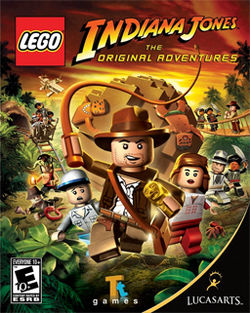 Back in January, I wrote a review for Indiana Jones and the Staff of Kings, and mentioned that it initially started life as a title for the Xbox 360 and PlayStation 3 before briefly spending some time in development hell until the game was eventually released in 2009.  While fans waited to see Indiana's debut on next generation consoles, they got their fill of the character through the 2008 film Indiana Jones and the Kingdom of the Crystal Skull, and to coincide with the release of the movie, developer Traveler's Tales and publisher LucasArts released Lego Indiana Jones: The Original Adventures, a game showcasing the prior adventures of Indiana Jones in blocky form.

As the name implies, this title takes the first three Indiana Jones films: Raiders of the Lost Ark, Indiana Jones and the Temple of Doom, and Indiana Jones and the Last Crusade, and condenses the plots, moments from the films, and characters into Lego form, with some changes made in order to retain the family-friendly nature of the games.  For the uninitiated here's a brief plot summary of each of the three films; in Raiders of the Lost Ark, Indiana Jones travels the globe in search of the fabled Ark of the Covenant, which the Nazis are also looking for in order to use the Ark's fabled power to change the tide of World War II.  In Temple of Doom, Mr. Jones, accompanied by the mildly annoying Willie Scott and the awesome sidekick Short Round, tries to recover sacred stones for a local village after they were stolen by the Thuggee cult, led by Mola Rahm.  Finally, The Last Crusade sees Indiana teaming up with his father, Henry Jones, as they are on a race against the Nazis to find the Holy Grail, which is said to grant a person immortality if one drinks from the cup.

In regards to sticking with the source material, the Original Adventures does a competent job at presenting the stories of the films in abridged form.  Certain alterations have been made to the source material though; most notably, Nazis are never directly referenced in the game, and instead a generic enemy faction; this also means that certain moments have been altered to remove any implications of the horrible deeds they were known for, including the scene where Indiana Jones and his father infiltrate a Nazi-held book burning session to retrieve Henry's journal from villainess Elsa.  Additionally, these reworkings and changes apply to the more shocking moments the films are known for; the opening of the Ark, for instance, is more comedic than frightening, and instead of Indy, Willie, and Short Round witnessing a heart extraction and sacrifice in Temple of Doom, the victim is dropped down into the lava and pulled back up to reveal he's perfectly fine, but lacking clothes except for his underwear.

As for the gameplay, Lego Indiana Jones follows the formula that has become the norm for Lego games almost to a tee.  Each of the films is split up into six levels filled with combat, puzzle solving, light platforming, and a slew of collectibles and other assorted knick-knacks to find.  In contrast to other games in the series such as Lego Star Wars and Lego Batman, which were more combat-focused, this title puts more of an emphasis on puzzle solving than on combat.  Every character has their own special ability or tool  which is used as means to solve puzzles or acquire objects used to build a device that can allow players to continue onward in a level.  For example, Indiana Jones can use his whip to not only disarm enemies or grab them, but to also quickly grab tools and other objects.  Meanwhile, small characters such as Short Round can crawl through pathways that normal characters can't, and characters armed with a blue book can decipher wall puzzles to retrieve something.  There's also a disguise mechanic in which characters can wear hats retrieved from fallen enemies in order to open up inaccessible rooms, but this concept, though interesting, is rarely utilized during the game.

Puzzles themselves are fairly simple to complete and never too complicated, which also applies to combat as well.  Defeating enemies is as simple as mashing the attack button, and should players die at any point in the game, they respawn albeit with a loss in studs, the game's currency.  Though lacking in challenge, the fighting mechanics do have some depth to them; at any point, characters can pick up and in certain cases, throw objects at enemies, which is fun, but trying to get rid of items currently equipped is a cumbersome process.  Besides using tools and other objects, firearms can also be pick up and used; however, unless it's a character that primarily uses a gun as a means of attack, ammunition is severely limited, and when a weapon runs dry, it can no longer be used.

While the game may be easy, there's enough content to keep players busy.  Hidden in every level are minikits, parcels, this game's version of red bricks, and a bajillion studs to pick up from exploring levels or destroying objects, and even though a majority of these collectibles are easy to obtain, some of them require a particular character that may not be available currently, which is where Free Play mode comes in.  Additionally, collected studs can be used to purchase characters and cheats at the college Indiana Jones works at; however, the selection of characters is rather forgettable due to the lack of variety.  For every Indiana Jones, Marion, or enemy soldier, you can expect to buy an alternate costumed version of these characters at least five or seven times.

Besides replicating the stories of each film, Lego Indiana Jones also recreates moments and set-pieces as major parts of the levels; unfortunately, the results are hit and miss.  For every fun section based off of the likes of the boulder chase from Raiders or the climatic encounters with the main bad guy of the current movie, there's a tedious or stretched out section such as the levels replicating the motorcycle chase from the Last Crusade or the mine cart scene from Temple of Doom.  Occasionally, certain sections of the films are left out entirely, resulting in missed opportunities for interesting levels; in particular, the opening sequence of the Last Crusade as well as the plane fight that happens later on would have made for fun stages.

Lego Indiana Jones isn't anything to write home about visually, but the graphics get the job done, with an art style that mixes Lego characters and objects with realistic environments.  The audio is decent, with amusing grunts and mumbles that are used for the peoples' voices during the generally humorous cutscenes, and the music, ripped straight from the films, is fine, but tracks are repeated frequently.

Though it is largely the same old song and dance, Lego Indiana Jones: The Original Adventures is still an enjoyable experience.  While the combat and puzzle solving are simplistic and lacking in difficulty, it's still mildly fun due to the subject matter of the game.  However, some of your enjoyment does stem from how much you like the films and the Lego games in general, as the game sticks very closely to the mechanics the series is known for.

Posted by William Lowery at 9:35 AM