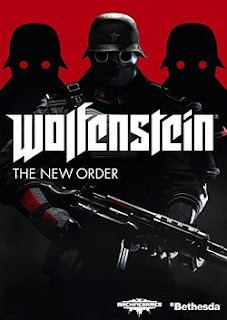 First person shooters have changed significantly since Wolfenstein 3D, the game which laid the groundwork for how FPS's should work and play.  Gone are the days of having to rely on health and armor in order to survive, as is the ability to hold multiple weapons; instead, regenerating health and two-weapon limits have become characteristics of modern-day shooters.  Wolfenstein: The New Order is an attempt to merge the old with the new, utilizing the best elements of older shooters and modern shooters to create something that is both a blast from the past but also one that fits into the landscape of modern FPS's.

Wolfenstein: The New Order's story starts in 1946; series protagonist B.J. Blaskowitz is leading an effort to infiltrate a fortress occupied by the sinister Nazi general Deathshead.  Unfortunately for Blaskowitz and his allies, their efforts are futile as during the attempt, they get captured and one of their own is killed by Deathshead.  The remaining allies, including B.J., escape captivity, but an explosion from the fortress causes shrapnel to fly out and hit B.J., and he goes into a coma.  Fast forward fourteen years and Blaskowitz awakes from his coma, looking like he hasn't aged in the slightest, as Nazis are raiding the medical facility he's being held at.  After escaping, he meets up with one of the nurses from the place, and she and her family inform him that the Nazis now rule the world, and worst of all, they landed on the moon and have a base established there.  Eventually, Blaskowitz teams up with a small group of resistance fighters in an effort to try and take down one of the leaders of Nazi-controlled Earth, Deathshead.

Although the setting and concept of Wolfenstein: The New Order is quite ridiculous, the writers keep a nice balance between realism and fantasy; the concept of a Nazi-controlled world results in creative ideas such as the Third Reich-occupied moon, giant robots, and cities dominated by large skyscrapers and false propaganda.  However, we are reminded that all of society is being controlled by a race of very bad cruel people through the actions of the antagonists and by several moments of shock punctuated throughout, including a level that involves Blaskowitz infiltrating a concentration camp, posing as a prisoner in order to retrieve valuable information.  Another strong aspect of the story are the characters; with the exception of one person, every other character, both good and bad, is fairly memorable.  The resistance fighters B.J. teams up with are all likeable, and they are all fleshed out heavily through various conversations and cutscenes, most of which occur at the resistance headquarters.  On the flip side, the antagonists, including Frau Engel and Deathshead, are quite intimidating and at times, flat-out creepy.

Even though the secondary characters are interesting, the same can't be said for B.J. Blaskowitz, the main protagonist.  He may have been born to kill Nazis, but Blaskowitz is a dull and largely uninteresting character; personality-wise, he feels less like a badass and more like an everyman-type of hero.  An attempt is made to flesh out his character through internal monologues he has throughout the game, but these moments feel out of place and the overly-dramatic narration makes him seem like he is auditioning for a role in Sin City.

As I mentioned briefly in the opening paragraph, Wolfenstein: The New Order's gameplay is a strong mixture of old and modern first person shooter elements.  The game borrows from the old by having a health and armor system, a weapon wheel, and complex levels filled with various secrets and hidden passages; on the other hand, Blaskowitz moves and controls fluidly, he can dual wield weapons, and though health and armor must be collected in order to survive, B.J.'s health will regenerate briefly if it gets dangerously low or if a minor percentage is lost.  This mixture of old and new results in a game that is immensely fun to play and the mechanics are backed up by rock solid shooting, diverse and creative enemies, and a unique skill system.

Combat is furious and intense; B.J. acquires a large selection of firearms including pistols, shotguns, assault rifles, sniper rifles, and more; most of the weapons he carries in his arsenal can dual wielded for maximum carnage.  Additionally, by exploring the levels, different attachments can be found for the individual guns including silencers for the pistol, a rocket launcher attachment on the assault rifle, and special shotgun shells that can bounce off of walls. These weapons will be used against a varied selection of enemies including standard Nazi soldiers, as well as heavy armored variations, plus robots, mechanized dogs, and enemy officers.  In certain parts of the levels; the player is given the choice of either using stealth or causing a ruckus; if an enemy spots B.J., then the officers will call in reinforcements until they are killed.  Fortunately, the stealth mechanics are solid and the ability to lean in and out of cover by holding L1 on the PS4 is useful when checking your surroundings.  However, while the enemy AI is good, there were a few times during stealth where I killed a bad guys and his buddy did not seem terribly surprised by the man knifing his ally.

To complement the solid shooting, the level design is equally good; many levels feature multiple pathways that may provide an alternate way to the objective or to help Blaskowitz get the drop on enemies.  Exploring the levels will also let you find and collect collectibles and supplies.  An interesting aspect to the New Order's gameplay is the skill tree system; the four different trees: Stealth, Tactical, Assault, and Demolition, feature different skills that are unlocked through a number of different ways, including getting a certain number of kills via a particular weapon or by overcharging B.J.'s heath. This system provides an incentive to mix up your tactics in combat or stealth in order to unlock certain abilities.

On the technical side, Wolfenstein: The New Order looks quite good with solid character models and environments large in scope and size, as well as excellent cinematics.  The audio is also good, with great sound effects for the guns and well done voice performances, a nice touch is that since the characters encompass multiple ethnicities, most of them speak in their native language or with an accent, which was especially surprising with the Nazis and their near constant usage of German.  Unfortunately, the same can't be said about the music, while certain tracks, including the German covers of old songs, are interesting, the remainder of the music is fairly average.

Wolfenstein: The New Order is a solid and entertaining experience; the game takes full advantage of its premise to deliver a unique and engaging story.  Equally engaging is the gameplay, which successfully merges old with new to deliver a frenetic, action-packed experience.

Posted by William Lowery at 9:51 AM