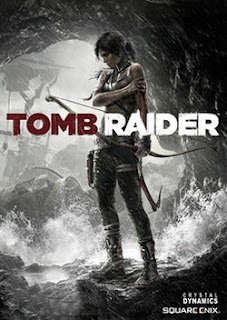 A few months prior, I wrote an article discussing the dangers of going in blind to a game or movie, and though I focused on the negatives in that article I briefly mentioned the positives; Tomb Raider is an example of the latter.  Growing up, the series was one I knew about primarily because of the protagonist, Lara Croft, and not much else; despite this, I never played any of the previous games in the series before this one.  Fortunately, Tomb Raider is a reboot, scrapping away the history and stories of the original games in order to show the origins of the Tomb Raider herself.

Tomb Raider's story centers on a group of archaeologists, one of which is Lara Croft herself, who are searching for a lost kingdom called Yamatai.  During the search, the ship they are on gets torn apart by strong storms and the group ends up on a mysterious island; unfortunately, the members were separated from each other during the ship's destruction, and when Lara makes it to the island she is by herself.  It isn't before long that she finds one of her friends, Sam, who is with a mysterious man named Mathias, but when Lara passes out, she wakes up to find out that Sam and Mathias are gone.  As the story progresses, she reunites with other members of the team, who are focused on getting off the island, meanwhile, Lara discovers that something or someone might be preventing them from leaving the island, and there might be a connection between the kidnapping of Sam and the mysterious force holding them back from escaping.

When it comes to pacing and intensity, Tomb Raider is one of those games whose narrative is equivalent to that of a rollercoaster ride, the game does slow down events often in order for players to catch their breath, but you are constantly engaged over what is happening onscreen most of the time.  The story, though mature in tone, utilizes a supernatural element which gives the island a sense of mystery and intrigue to the place.  As for the characters, they're fairly compelling with the exception of one character whose actions and motivations were rather predictable, but the highlight of the cast is Lara Croft.  Her role in the story reminded me heavily of Jason Brody from Far Cry 3, both characters find themselves in a "fish out of water" scenario where they are in a hostile environment and they have to learn to survive, which lets them develop into determined individuals as the story progresses.  However, the point at which their personalities shift is where the two characters differ; in Far Cry 3, Jason Brody's shift from confused to confident was rather quick, he got used to having to kill in order to survive fairly quickly.  It takes a couple of hours into the story before Lara Croft realizes that is she is going to survive and help her friends, then she needs to wise up and be ready to handle difficult situations, which she does as the game progresses.

Whereas previous games in the Tomb Raider series were focused on platforming and puzzle solving, this game shifts the focus to platforming, combat, and exploration while puzzles take a back seat.  In terms of control and mobility, Lara Croft controls well and is quite flexible in her movements, which is good, because there is a lot of platforming and climbing.  An interesting thing regarding Lara is that during combat or stealth she will dynamically stick to walls and other cover without the need of pressing a button; fortunately, this works quite well and it never becomes an issue during the game.  Speaking of which, combat and stealth are excellent; in most situations, you are given the option of either using stealth or being loud and noisy.  The selection of weapons Lara can wield includes a bow and arrow, handgun, shotgun, and assault rifle, these weapons can be upgraded at campsites, but more on that later.  Out of all the weapons, I used the bow and arrow the most because the polished gunplay makes using this weapon quick and easy; even during firefights, the selectable flaming arrows still allow the weapon to be a good choice if the action heats up.

To benefit the intense action, the level design keeps a great balance between linearity and openness.  Although Tomb Raider is a linear game, certain sections of the island contain wide, sandbox-esque spaces that act as reprieves from combat and other intense parts of the game.  Each of these zones contains a wide variety of collectibles to find as well as hidden tombs; additionally, in these areas and other parts there are campfires that act as upgrade stations, allowing players to upgrade their gear and weaponry, plus spend skill points obtained from earning XP.  These skill points can be put towards one of three skill trees filled with different attributes and abilities to unlock.  If there are enemies present in the open spaces, mobility and utilizing the environment to your advantage are strongly encouraged, and staying in one spot during combat is not the best idea as enemies can easily flush Lara out of her current hiding spot with either Molotov cocktails or dynamite.

Though the platforming, combat, and stealth are great, the puzzle solving is the weakest aspect of the game.  Aside from a couple of puzzles near the end, a majority of them are fairly easy; also, despite the name, Tomb Raider doesn't put much of an emphasis on the tombs that can be discovered.  They are treated as optional side missions, meaning it's possible to avoid most, if not al, tombs that are hidden on the island; secondly, the tombs aren't too hard to figure out and solve, though the rewards at the end of the tomb are greatly beneficial.  Another issue, though not as significant as the one mentioned prior, involves the enemy AI, while they put up a good fight sometimes they have trouble navigating tight corridors or entryways, and seeing five bad guys huddled into a doorway trying to attack Lara is like watching clowns trying to get out of a clown car.

Visually, Tomb Raider looks great with detailed and at times, breathtaking environments, and solid character models.  Complementing the excellent visuals are equally excellent voice performances and music, which is either quiet ambiance or more dramatic and tension inducing depending on the current situation at hand.

Tomb Raider is one of those games that is a great experience from start to finish.  With a strong protagonist, intriguing story, and an entertaining mixture of platforming and combat, this is a game certainly worth your time, regardless of your own history with the series.