I Came, I Saw, I Entered, and I Conquered: Reflections of Black Belt Grading 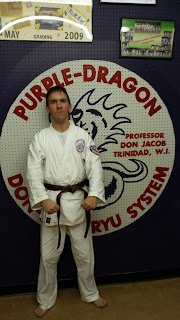 For the past seven years, I have trained under the Purple Dragon Don Jitsu Ryu Martial Arts system; at the time, I was an everyday, somewhat reckless twelve year old who was forced by stepmother to join or else she would find something else for me to get involved with.  Me, my sister, and my two stepbrothers joined the local dojo in Hattiesburg, early on, the stepbrothers dropped out, and a few years later, my sister.  I am the only one out of my family still involved with Purple Dragon; it's been a long and sometimes bumpy ride, but in the end I'm glad I've stuck with the system because of how much it has benefitted me both physically and mentally.  On March 23, 2016, I, along with my father and sister, traveled to Boca Raton, Florida so that I could partake in an event that had been a long time coming: black belt grading.

Leading up to this major event, I never really had any thoughts of nervousness or doubt regarding how I would do, all I knew was that I needed to do my best and succeed.  The grading itself was a three day process in which the candidates were tested in the different areas of the system, including katas, self defense techniques, and sparring, among others, interspersed between these sections were long discussions regarding Purple Dragon and life as spoken to us by the founder of the system, Professor Don Jacob.  While my legs may have been aching from the long periods of sitting in a lotus position, I was nevertheless compelled by what he explained to us.  As he pointed out at one point, some people will understand the significance of what he might be explaining, but others not as much until they get older.

I'm glad that I came to my classes to train and performed different exercises outside of the dojo because some of the things we were put through were quite challenging; by far, the hardest one was holding a horse stance for nearly a count of one thousand.  The legs got really sore holding the stance but at the same time I knew not to give into the pain and that everything would be alright.  One things for certain, though, I'm going to be staying away from salads for a while after eating them for lunch and dinner every day of grading.

After three days of punching, kicking, salad eating, and yelling "Kiya!" like the hardened warriors we are, the results were announced.  There were surprises, shocks, and while I was sitting there waiting for my name to be called I was mildly nervous about what rank I would get, but I breathed a huge sigh of relief when I jumped up and I heard one of the judges say, "Jet black belt."  I was relieved but at the same time excited knowing that all of those years with Purple Dragon resulted in a monumental success.

We have a book in Purple Dragon that allows us to write down all of the various ideas and goals in life we come up with.  In my copy, I wrote down that I should do or still be involved with in the five year period between now and 2021, one of which was that I should still be with Purple Dragon.  In one of the lectures, Professor discussed how some people leave the system after getting their black belt but others stay; personally, I want to stick with the latter and continue training because of how much the system has benefitted me.  I have witnessed many people come and go in our local dojo in Mississippi, yet one of the constants was myself, until the next major step of my life takes place, I plan on sticking with the system.

Posted by William Lowery at 9:50 AM