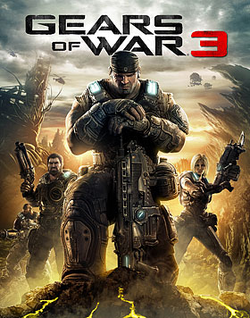 In any trilogy from movies, games, or books, the finale not only concludes the ongoing story told in the prior entries but it also raises the stakes in some way or form.  An example would be the original Star Wars trilogy; Return of the Jedi is the final entry in the original series of films and the movie brought closure to the story; however, the film also brought into play a new threat which the characters had to figure out how to destroy, which was a second Death Star that was still in construction.  Similar to Star Wars, Gears of War 3 is the conclusion to the story of super buff men and women trying to defeat their persistent foe, the Locust; yet, in addition to their recurring enemy they also have another threat in the form of the Lambent, who threaten to eradicate not just the humans but also the Locust as well.

After the events of Gears of War 2, the remnants of humanity are trying to eradicate what's left of the Locust race in order to try and return things back to normal; unfortunately, that's not an easy task.  A deadly parasitic race known as the Lambent has sprung up from emulsion, a fuel source utilized by humanity, and they have been rapidly spreading all over the planet Sera, wiping out and consuming the remnants of life on the planet.  On one of the ships housing survivors, series protagonist Marcus Fenix receives a cryptic video message from COG commander Prescott revealing that his dad Adam Fenix is still alive.  However, the ship Marcus, his allies, and the civilians are on gets attacked by the Lambent, but after escaping him and his squad decide to go search for his father, who knows how to get rid of the menace threatening to eradicate Sera.

As a conclusion to the events that started in the first Gears of War, Gears of War 3 wraps things up nicely.  It's very similar to the plot of the last game in that Marcus and company are searching for a solution to an ever-growing problem that wants to eradicate humanity, but it's still enjoyable thanks to likeable protagonists as well as some surprising story moments.  Since this is the final chapter of a trilogy, the story does kill off one of the main characters in the series but the way the eventual moment is handled is strong and you feel both shocked and sorry for the decision the person decides to make.

Gears of War 3's gameplay doesn't stray too far from the cover based shooting mechanics that the series is known for, which is both good and bad, but first, let's start off with the good.  The gunplay is rock solid and there is a wide selection of firearms to utilize, including weapons from the previous games along with new ones.  Returning weapons include the lancer, Gnasher shotgun, hammerburst, and the longshot sniper rifle, among others.  A couple of the returning guns have undergone slight modifications; for example, you can now look down the sights of the hammerburst by clicking the right analog stick, and the gorgon pistol, a sidearm from Gears of War 2, has been converted from a burst fire peashooter into a submachine gun.  New weapons include the retro lancer, which has ridiculous recoil but there's a bayonet at the end that can be used as a melee attack; there's also a sawed off shotgun and a weapon called the digger that fires a creature that burrows underground before popping up and exploding. Additionally, every weapon has their own special execution that can be performed on near dead enemies by pressing the y button.

Returning from the previous game are the Locust, who are relatively the same in terms of enemy variety and attacks, but new to this game are the Lambent. Although certain types of Lambent wield firearms, these creatures are capable of mutating during the heat of battle, sprouting additional appendages that can spew damaging substances.  At a certain point in the game, Marcus and his allies confront humans that have been turned into zombie-like creatures due to exposure from emulsion.  These enemies are capable of running and overwhelming you with their numbers, so crowd control is vital during those parts.

While combat is satisfying it leads into the penultimate problem facing Gears of War 3, which is a severe lack of variety in the story mode.  For a majority of the campaign, you're shooting either Locust or Lambent bad guys, and though there are set piece moments interspersed throughout to break things up, there aren't enough of these events.  I will confess, there were times where I felt bored playing the game due to the constant shoot-outs; that's right, a game that allows you to saw enemies in half with a chainsaw attached to a gun started to get monotonous during play sessions.  Because of this, Gears of War 3 also has a more uneven pacing when compared to Gears of War 2, which had a better balance of shooting and variety.

Despite the campaign taking a step backwards in pacing and variety, one mode that has been improved is Horde mode.  The goal remains the same: fight off multiple waves of enemies until you die, but there's more depth to this mode; now, money can be earned from killing enemies and completing optional objectives that appear during certain waves.  Money that is earned can be used to buy new weapons and to purchase different means of defense such as barriers and turrets to hold off enemies.  In addition to Horde mode, there's a new mode called Beast, which is similar concept to Horde only here, you play as one of the different types of Locust and Lambent in order to eliminate the human resistance before time runs out.  Unfortunately, this mode feels unbalanced in single player as trying to beat a round without partner is quite challenging, and not in a good way.

As expected from the series, Gears of War 3 features top notch visuals and sound design; the graphics showcase visceral carnage during firefights, plus great character models and environments large in both size and scope. The voice acting is great but Ice T, who makes a cameo in the game voicing a survivalist billionaire, is laughably bad in his performance as his near constant swearing whenever he speaks feels out of place and makes his character feel very cartoonish.  The music reflects the intensity and scope of the game by being epic and large scale.

As a conclusion and a game in its own right, Gears of War 3 is good, but not great.  The uneven pacing of the campaign results in more of an emphasis being put on gunplay instead of an event balance between shooting and set piece moments, and though the combat is solid, the large amount of shooting causes feeling of repetition and monotony to develop while playing the game.

Posted by William Lowery at 4:34 PM