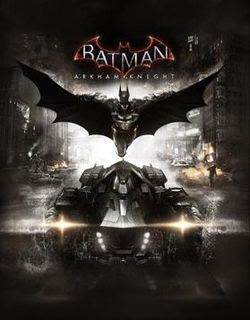 During the previous generation of consoles, one of the biggest surprises was the Batman: Arkham series; prior to the release of 2009's Batman: Arkham Asylum, the Caped Crusader had a mixed track record when it came to his video game adaptations.  For every Batman, Batman Returns, and Batman: The Brave and The Bold, there was a Batman: Dark Tomorrow, Batman: Vengeance, and Batman and Robin, yet the release of Arkham Asylum ushered in an era of good Batman games, and the later releases of Batman: Arkham City and Batman: Arkham Origins led the series to become one of the biggest hits of that console generation.  Fast forward to 2015 and we have Batman: Arkham Knight, which is not only Batman's first foray onto next-gen systems, but also the last installment in the Arkham series.

(WARNING: MILD SPOILERS ARE AHEAD) After the events of Arkham City, crime has dropped significantly and the citizens of Gotham City enjoy not having to worry about criminals running loose.  During Halloween, however, Scarecrow shows up threatening to spread his fear gas all over Gotham; this results in most of the city's population evacuating, leaving the criminals and other scum to run loose.  As a result, Bruce Wayne dons the batsuit once again to Scarecrow and his evil plan, but early on in the game it's revealed he is working with a mysterious villain called the Arkham Knight, who has a personal grudge against Batman.  The Arkham Knight and Scarecrow unleash an army onto the streets of Gotham, and Batman must stop both Scarecrow and the Arkham Knight before they can spread terror across Gotham and other cities.

Arkham Knight's story significantly raises the stakes both in the narrative as well as in character development; Bruce Wayne finds himself going up against innumerable odds that test him both mentally and physically.  Out of all the games in the Arkham series, this game significantly delves into the psychology of Bruce Wayne, showing the vulnerabilities he faces since the events not only threaten Gotham but also affect his closest allies, particularly Commissioner Gordon, Oracle (a.k.a. Barbara Gordon), and Robin.  Additionally, the psychological element of the story is made more intriguing by the presence of the Joker.  Despite dying at the end of Arkham City, the Joker is still around, metaphysically speaking; after Batman exposes himself to some of Scarecrow's fear toxin to prevent an explosion, the Joker shows up, acting as a demon watching and remarking over the events and decisions Batman makes.

Although the story is quite good there are a few problems, the biggest one being the game's uneven pacing.  This is in part due to the game's side quests; too often, Batman is contacted by Alfred or Oracle in order to inform him about side quests that need to be completed; from a gameplay perspective, it's understandable because in order to see the entire ending, you have to beat the game, 100%; yet, as a result, there are too many abrupt stops in the story.  Another issue involves a certain moment in the game, a very powerful scene, I might add, but the impact this scene leaves is diluted as it's discovered later on that the character who supposedly died is still alright. This is disappointing because for a majority of the game, Batman feels guilty over not being able to save this person, and the reveal later on makes his guilt feel rather pointless.

Before I move onto the gameplay, I have to discuss the Arkham Knight; this character has split opinions down the middle, some people like him, others don't, and it's because of who he is revealed to be later on.  Personally, I don't think he is a bad character, in fact, the game does a good job at building up suspense over who this person really is; the problem is that when it's revealed who this character is you realize this villain is just an alternate interpretation of a character that already exists in the Batman mythos.  Before the game was released, the Arkham Knight was touted as being an entirely new creation; when in reality, it's only a partial truth.

Batman: Arkham Knight's gameplay is a mixture of returning elements, plus new ones; similar to Arkham City and Arkham Origins, there's a massive open world for Batman to explore and complete different tasks within; in Arkham Knight, the setting is Gotham City, which is composed of three interconnected islands.  Also, the combat and stealth the game are known for have been greatly refined and expanded tremendously.  Combat is fast and intense; Batman can still punch, counter attacks, and utilize special takedowns and his gadgets against enemies, but new moves have been added for him to use.  Batman can now attack thugs that are lying on the ground, so you don't have to rely on the ground takedown option to finish them off, though that is still an option.  In addition to this technique, he can throw enemies by pressing the counter button and pushing the analog stick in a direction, as well as utilize environmental objects to dispatch foes; also, he can briefly wield their melee weapons sans knives in order to deal more damage.  On the flip side of things, bad guys will now try to tackle Batman or grab him and there are also new foes to face during combat.  New to this game are medics who can revive fallen allies and give them a special electrical shielding, and the brutes from previous games now wield swords, shock gloves, or shields in addition to using their fists.

Similar to combat, stealth has also been polished greatly and expanded upon; to begin with, the level design in these encounters is more varied, there aren't as many easy to grapple to vantage points to use and instead the stealth sections encourage you to move around in a level while sticking to the shadows a' la Splinter Cell: Blacklist.  A new move to use during stealth is the fear takedown; when prompted, Batman can take down up to three enemies quickly and efficiently; this move can be upgraded to allow for up to five bad guys to be knocked out; however, this move can only be used once you have performed a silent takedown and even then, you'll want to utilize the environment and Batman's gadgets to knock out enemies.  As expected, enemies are equally aggressive during these parts, if they realize you're relying heavily on the vents they will throw out firebombs to prevent you from using them again.  In addition to dealing with medics, there are also drone operators, foes who can pinpoint Batman's location if detective vision is active, plus sentry gun operators and minigunners, the latter of which must be dealt with last if they show up.  Because of the increase challenge, Batman: Arkham Knight is the most difficult installment out of all the games in the series, yet there's a great sense of satisfaction that comes from beating up a room filled with a large group of thugs or stealthily taking out enemies in a difficult stealth section.

There are two ways of navigating the streets of Gotham City, either by grappling onto ledges and rooftops and using the glide boost or driving the Batmobile.  After three games, players can now utilize this vehicle for driving, combat, and puzzle solving.  In terms of handling, the Batmobile controls well, but the most unique mechanic of this vehicle is its alternate tank form, activated by holding L2.  This mode is used to fight the Arkham Knight's army of tanks and helicopters; don't worry, though, they are unmanned, which means it's perfectly okay for Batman to shoot tank shells, launch missile barrages and EMP blasts against them.  Despite being somewhat far-fetched for the standards of Batman these fights are enjoyable, even if they can get repetitive.  In addition to fighting enemy vehicles, the Batmobile is used in various obstacle courses set up by the Riddler, and since he is in this game then you can expect to hunt down a large amount of trophies and riddles in addition to completing the puzzle rooms.

Speaking of which, Batman: Arkham Knight features a wide assortment of side missions to complete, including stopping Firefly, who is trying to burn down Gotham's firehouses, preventing Two-Face from robbing banks, or taking out the various watchtowers and militia checkpoints scattered around the city.  Unfortunately, most of these side missions are tedious to complete or they end on an anticlimactic note; for example, the Man Bat encounters boil down to latching onto him and watching Batman trying to get a blood sample or apply a cure he develops as the missions progresses.  On that note, a major disappointment is the lack of boss fights, after the solid boss encounters of Arkham City and Arkham Origins, you think the developer, Rocksteady, would try to raise the stakes; unfortunately, that's not the case.  In the previously mentioned Two-Face side mission, Two-Face shows up during the last heist attempt and he can be taken out with one silent takedown.

From a visual and audio perspective, Batman: Arkham Knight features top notch production values.  The visuals feature highly detailed character models and environments; Gotham City's architecture is a mixture of old and modern designs and the constant rainfall gives the city an ominous atmosphere; with that said, there were a couple of minor glitches.  Said glitches included weird body movements whenever an enemy was finished off but a more annoying glitch involved getting stuck in a room and unable to leave, which was fixed by quitting the game and restarting it; aside from those technical quirks, the game ran fine.  Audio-wise, Kevin Conroy reprises his role as Batman after not voicing the character in Arkham Origins, and his performance as the Caped Crusader is easily his best to date, but Mark Hamill steals the show voicing Joker once again in this game.  The other returning actors such as Nolan North, Tara Strong, and Steve Blum are joined by newcomers Jonathan Banks and John Noble, who voice Commissioner Gordon and Scarecrow respectively, and they both give strong performances.

As a conclusion to one of the best franchises from the previous console generation, Batman: Arkham Knight is a solid effort.  In spite of some of the story and gameplay problems, this is still a well-made game with a good and engaging story, great gameplay, and excellent visuals.