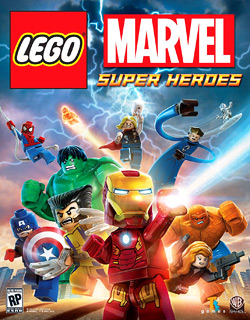 In the past ten years, the LEGO games series has grown in both popularity and complexity.  Since the release of 2005's LEGO Star Wars: The Videogame, developer Traveler's Tales has gone on to create titles based off of the likes of Batman, Indiana Jones, and Harry Potter; 2012's LEGO Batman 2: D.C. Superheroes shook up the formula established in prior entries by featuring an open world to explore.  Recently, LEGO Dimensions took the concept of LEGO-izing popular franchises to another level by featuring various properties in one game.  Before the release of that game, Traveler's Tales made a game in 2013 which featured virtually every single Marvel character to date, that game being LEGO Marvel Superheroes.

LEGO Marvel Superheroes' story follows the efforts of various heroes from the Marvel universe, including the Avengers, X-Men, and the Fantastic Four, as they work to stop an evil plan being concocted by Dr. Doom.  Dr. Doom has recently gotten his hands on Cosmic Bricks, which are what Silver Surfer's board is made of, and working in conjunction with Loki and other Marvel villains he plans on using the bricks to create a deadly superweapon.  This is what his plan seems like at first, but it's later revealed that Loki wants to use Doom's device to attract the colossal being known as Galactus, so that he may devour Earth and the heroes and villains who inhabit the planet.  Thus, the good guys and the bad guys find themselves working together to stop Loki and his diabolical scheme.

LEGO Marvel Superheroes takes advantage of the property this game is based off of by having each of these various heroes and villains later on work together.  For fans of the different properties, it's a treat to see members of the X-Men work together with the Avengers or vice versa, and the writing leads to entertaining banter between the characters in every mission.  The game does take some liberties with a few of the playable characters in order to retain the family friendly tone these games are known for; Mr. Fantastic is able to contort his body into different types of equipment via special pads in addition to elongating his body, and the Punisher, who you can accept missions from in the open world, is an eco-driven vigilante and not a brutal, revenge driven vigilante like he is in the comics.  As in every LEGO game, humor is prevalent throughout, both in dialogue and in various physical gags that can happen during gameplay and cutscenes.

LEGO Batman 2: D.C. Superheroes introduced open world gameplay into the already established formula that had been used in previous entries; this game utilizes that same structure, with an open environment in the form of New York City to explore, while the story missions are linear and focused on combat and puzzle solving.  The gameplay is enjoyable but makes it unique from past titles is the large roster of heroes and villains to choose from and play as.  Every character, whether good or bad, has their own powers which are utilized well in both combat and puzzle solving; though the different characters do have shared traits.  For example, Spider-Man and Wolverine are able to sense hidden objects in the environment, Hawkeye and Black Widow are able to wall jump on certain structures, and big characters like the Hulk and the Thing are able to lift and throw heavy objects.  Using these different abilities in combat is fun, even if defeating enemies is as simple as mashing the attack button.  On the other hand, puzzle solving is more satisfying as you have to utilize the characters' powers in order to find objects and activate machinery in order to continue on.

When you're not completing story missions, you'll be exploring New York City in search of any number of collectibles strewn about the environment.  Unlike in LEGO Batman 2, where the pedestrians of Gotham City were constantly in a state of panic and were rarely calm; here, citizen life in New York feels more natural and not as hostile, which is good, because in this game there are side missions to undertake.  Scattered around the city are citizens and different characters from the Marvel universe who require you to do something for them; after completing the task, the reward is either a gold brick, a new character, or a new vehicle.  Additionally, there are also special story missions called Deadpool Tales narrated by Deadpool that are unlocked once a certain number of gold bricks have been found.  The collectibles you earn from completing side quests can also be acquired by exploring the city and completing puzzles in order to retrieve them.  The amount of things to do and collect in this game is stagerring, and if you want to find everything, this game will keep you busy for a long time.  The story levels also contain their own collectibles in the form of minikits, most of which are found in free play mode as some require characters you may not have in order to retrieve them; there are also red bricks, which unlock special modifiers, and in every level legendary comic creator Stan Lee can be found and rescued.

Visually, the game uses a mixture of real life environments and LEGO characters and objects which help give the visuals a unique look, and the animations for when Mr. Fantastic morphs into something or when Bruce Banner changes into the Hulk and back are always fun to watch.  Similar to LEGO Batman 2, spoken dialogue is utilized instead of grunts, and the performances from the likes of Troy Baker, Steve Blum, and Roger Craig Smith, among others, are solid.  Unfortunately, the music, while retaining the epic scope of a soundtrack for a superhero film, is mostly forgettable.

While LEGO Marvel Superheroes doesn't bring anything new to the table, it's still a solid game.  The mixture of open world exploration, simplistic but fun combat, puzzle solving, and many collectibles to find is enjoyable, but the usage of characters from the Marvel property help inject some uniqueness into the established formula of the LEGO games.

Posted by William Lowery at 9:58 AM