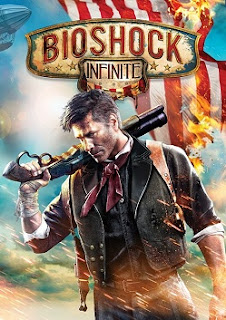 Back in 2007, gamers were treated to a game called Bioshock.  Created by Irrational Games, Bioshock saw players guiding a man known as Jack through the ruins of an underwater utopia known as Rapture in search of answers.  After its release, the game was heralded as a classic and three years later a sequel, Bioshock 2, was released.  Despite not being developed by Irrational, the sequel was still a hit both critically and financially, but in 2013 the studio responsible for the first game in the series returned to bring a new installment that may carry the name "Bioshock" in its title, but is actually its own, separate entity, not connected to the first two games.  Thus, we have Bioshock Infinite.

Bioshock Infinite is not connected to the other games in the series, though there are some clever nods to the older entries in this game.  The story follows Booker DeWitt, a former agent for the Pinkertons who is seeking freedom from his past debts by finding a girl named Elizabeth for unknown assailants.  Said girl is bring held somewhere in Columbia, which Booker quickly learns is a city in the sky.  When he arrives things seem perfectly fine in Columbia, there's a festival going on and people are enjoying the festivities, but shortly after arriving Booker discovers the dark side this city harbors, while also finding out that he is a wanted man in Columbia, despite this being his first time in the city.  Columbia's governor is Zachary Hale Comstock, whose beliefs and ideologies have acted as a template for how the city is controlled.  Eventually, Booker finds Elizabeth, locked away in a tower, and the two narrowly escape the place after evading Elizabeth's protector, Songbird.  Now, Booker must ensure Elizabeth's safety out of Columbia which will hopefully result in Booker's freedom from his debts.

Bioshock Infinite's story starts out simple but quickly becomes complex and intriguing as events roll into motion.  The game's story tackles the issues of racism and class division which are best exemplified by Columbia itself.  The floating city features various districts and areas showing how divided the place is in terms of class and race; a majority of the city is well designed and livable but later on the more dingy portion of the place becomes present with poor citizens and terrible living conditions prevalent in this part of the city.  Another running theme is the concept of alternate realities; Elizabeth can open up rifts called Tears to bring items into the current reality, which is not only just a gameplay mechanic but also an integral part of the story.  Bioshock Infinite is one of those games that makes you think about certain events and aspects of the story.  A simple one is a moment that happens early in the game when Booker encounters a barbershop quartet singing "God Only Knows" by the Beach Boys, even though the song didn't exist back in 1912, the year the game is set in.  The ending of the game, while wrapping up the story nicely, is open to interpretation about what it's trying to say.

Besides an intriguing story, Bioshock Infinite features a memorable cast of characters.  Booker DeWitt's troubled past makes him an interesting lead, especially when more of his history is revealed as the game progresses, and Zachary Hale Comstock's misleading beliefs and ideologies result in a memorable bad guy, but its Elizabeth that steals the show.  She spends a majority of the game with DeWitt and over the course of the game she goes through a dynamic shift in character.  At first, Elizabeth is an individual brimming with energy and curiosity, considering that she has been locked away in a tower for all her life, but due to various situations in the story she becomes a more hardened person, a shadow of her former self.

Story and setting are not the only aspect in which Infinite differs from the previous entries as the gameplay is also largely different from the predecessors.  The only two elements that the gameplay of the previous installments share with this one are the special abilities and emphasis on scavenging and looting in order to find supplies.  Instead of wielding Plasmids, Booker uses different abilities called Vigors.  With Vigors, Booker can throw fireballs, shoot electricity, put up a polarity shield that catches bullets, and summon crows that attack and distract enemies, among others.  By holding down the left trigger, Booker can use the currently equipped Vigor's alternate function, which is normally a trap enemies can be lured into; each of the abilities is useful during combat although certain ones will be relied on more than others.  Vigors consume salts, which can be refilled by finding vials of the material or by consuming certain drinks or edibles.  Bioshock Infinite puts an emphasis on exploring and searching the world in order to find supplies; searching bodies, containers, et al will yield either health, salts, ammo, or money.

In addition to using a variety of salts to fight back the hostile foes of Columbia, Booker will also yield a large range of weapons.  The selection of firearms includes pistols, shotguns, machine guns, and sniper rifles, plus heavier firepower such as rocket launcher, Gatling gun, and a flak cannon (i.e. grenade launcher); however, Booker can only hold two weapons at a time, meaning choosing the right weapons is a must, given the various types of enemies he'll face.  The foes of Columbia consist of standard mooks armed with a melee weapon or firearm, heavily armored versions of standard bad guys, or ones who rely on Vigors as their method of attack.  On certain occasions there will also be deadly machines known as Motorized Patriots, which are Gatling gun wielding animatronics that resemble George Washington and Abraham Lincoln, or Booker may encounter the Handymen, part human, part mechanized beings that take a lot of hits to bring down.  To help Booker defeat foes he can upgrade his weapons and Vigors at vending machines scattered around Columbia.

After rescuing Elizabeth, she spends a large portion of the game with Booker, but don't worry, even though Booker does have to ensure she lives, Elizabeth is not prone to getting killed during combat and she will stay out of harms way when firefights ensue.  As I mentioned earlier, her special ability is opening up rifts called Tears.  These rifts can be used to offer Booker various means of assistance during combat, whether it be weapons, health, or cover, yet she can only open up one Tear at a time, so make sure to wisely choose which Tears to open up.

While the game is focused on combat, there are plenty of times throughout the story where things slow down and the player is allowed to take things easy and explore the surroundings.  The level design keeps a nice balance between linear areas and more open, sandbox-esque spaces which encourage exploration and to take in the surroundings; when combat does happen in these areas you're encouraged to move around and utilize the environmental advantages offered, especially when Booker is equipped with the Skyhook.  This device can be used as a melee weapon but it can also latch onto railways which are like mini-roller coasters that are very fun to use, just be aware that enemies can latch onto the railways as well when using them.

From a technical standpoint, Bioshock Infinite's visuals are quite gorgeous; the game uses a bright and colorful art style that acts as a sharp contrast to the brutal violence and seedier locations of Columbia.  Equally great is the voice acting, which features top notch performances from Troy Baker and Courtnee Draper, the voices of Booker and Elizabeth respectively, and the music composed by Garry Schymann is also excellent with its dynamic soundtrack and creative takes on songs from various decades that are strewn about the game.

Bioshock Infinite is one of those games that is immediately compelling from start to finish; the story and gameplay are strong enough to warrant multiple playthroughs but it's also a game filled with various moments and surprises that will be discussed heavily with those who have played the game.

Posted by William Lowery at 9:44 AM