Indiana Jones and the Staff of Kings Review 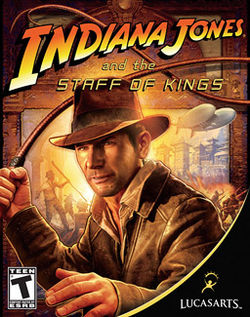 Indiana Jones is a series of films centered on protagonist Indiana Jones and his quests to find mysterious artifacts that the various antagonists of the films are also looking for.  In these films, Indiana Jones travels to different locations around the world, fights bad guys, escapes perilous situations, and encounters women who end up becoming his love interest during the films.  With a set-up like that, it should come as no surprise that there have been multiple games made based off of the film series, dating far back to the era of the Atari 2600.  This game has an interesting history; initially, the game was planned to be an Xbox 360/PlayStation 3 release, but development issues led to the game being shelved by its original developer, LucasArts.  Sometime after the game had been shelved, it was picked up developer A2M (Artificial Mind and Movement), who reworked the game into a title that would be released on the Wii and PlayStation 2 in 2009.

Staff of Kings follows series protagonist Indiana Jones, who is looking for the Staff of Moses before Magnus Voller, a former friend of Indy's, can get his hands on the staff and allow the Nazis to use it for their sinister plans.  Indiana's quest to find the staff takes him to different locations around the world, including San Francisco, Panama, and Nepal.  Along the way, he encounters a photojournalist named Maggie O' Mally, who gets involved in Indiana's quest to find the staff.

If this story summarization sounds too brief, it's because the game's plot is quite simplistic.  The plot points and character motivations feel like the story writers are just filling in the checkmarks of an Indiana Jones plot without taking the time to flesh out to develop these story events and characters.  To the game's credit, it does have the feeling of an Indiana Jones movie as Indiana does travel around the world and a couple of moments in the game are fairly interesting, and while the secondary characters are forgettable, Indiana Jones is the same character he was in the films, a charming, likeable person who likes the thrill of adventure.

As Indiana Jones and the Staff of Kings is a title that was released for the Wii, there are motion controls involved, and they're hit or miss, mostly miss.  There's a large selection of different motions that involve the Wii remote and nunchuck.  Some of these are cool, such as using Indy's whip by holding the B button and flicking the remote and at the end of one level you fly a plane by holding the Wii remote like a joystick and steer the plane by tilting the remote.  Certain sections of the game's levels require Indy's gun to be used in similar fashion to a light gun in on rails shooters, but aside from these actions the remainder of the motion control usages come off as gimmicky and unnecessary.  Punching, for example, is handled by thrusting the remote and nunchuck in different directions, which sounds fun, but most of the time when you throw a punch the game may not read your motions or it will misinterpret one of your swipes as a different swipe than the one you intended to pull off.  Yet, the worst implementation comes from the game's multiple quick time events in which you have to flail the nunchuck and remote like a heavy metal drummer in order to ensure Indiana Jones doesn't get crushed by falling debris.

Staff of Kings' gameplay is a mixture of platforming, puzzle solving, punching and shooting, and while this does ensure that the gameplay is varied, nearly every aspect has their own varying degrees of issues.  To begin with, some of the levels suffer from an overreliance on linear hallways and corridors that only act as a means to guide Indy to the next combat or puzzle area.  Certain sections of the game will require the usage of platforming, which works fine and maneuvering Indiana across ledges that may or may not be over bottomless pits can be somewhat tense at times; although the camera can be finicky in these parts, and this can potentially cause Indiana to fall and die due to the lack of a good perspective.  Then there's combat, which is the weakest part of the gameplay due to not just the finicky motion controls, but also the poor enemy AI.  In most fights, enemies stand around and wait for you to start fighting with one of them and even after the fighting starts enemies will just circle around you as you're beating up one of their men.  Enemies will try to attack you or throw an object at you from time to time, but otherwise, they're dumb thugs.  Additionally, the subpar AI carries over into the shooter segments, with enemies using predictable attack patterns and regularly taking cover next to something combustible that Indiana can shoot to quickly dispatch nearby goons.  The one positive aspect of combat is being able to use objects strewn about a room to dispose of thugs.

While the gameplay has its share of issues, one aspect that doesn't have as many problems as the other parts of the gameplay is the puzzle solving.  Throughout the game, Indiana Jones will have to solve a variety of puzzles in order to obtain something or get himself out of a room.  Some of these puzzles are very simplistic, but every other puzzle is fun and those puzzles feel like ones Indiana Jones would encounter in a temple and have to solve.

Besides having flawed gameplay, the Staff of Kings also has a short length; beating the game can take around five to six hours; though there is an incentive to replaying previous levels.  Hidden in most levels are collectibles that can unlock a slew of extra content including trailers for the Indiana Jones films, concept art, alternate skins, and an old point and click game called Indiana Jones and the Fate of Atlantis; surprisingly, this bonus game is a lot more fun to play than the main game.  Besides the various unlocks there's also a co-op mode in which Indiana Jones teams up with his father, Henry Jones, and various competitive multiplayer options as well.

Visually, the game is rather bland; it looks and feels less like a Wii game and more like a mid-cycle PS2 game with its average looking environments and low-res character models; though the game does an adequate job at capturing the scale and size of certain levels and situations in the game.  In terms of voice acting, the actor who voices Indiana Jones does a good job sounding like Harrison Ford, the actor who plays Indiana Jones in the movies, and the remainder of the voice cast does a decent job with their characters.  While the music is lifted from the films, it's still good and it fits the tone of the game.

To conclude, Indiana Jones and the Staff of Kings is fairly mediocre.  The story is nothing special, the controls are too reliant on gimmicks, and though the gameplay had the potential to be good, it falls short due to a number of different issues.  While the game does have its moments and the unlockable Fate of Atlantis is fun, this isn't enough to warrant the recommendation of a purchase.