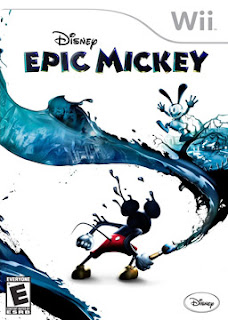 Last year, I reviewed Epic Mickey 2: The Power of Two, a game that may have nailed the look and feel of Disney animation, but suffered from a paper-thin story and gameplay that could be fun on occasion but was largely tedious due to forced co-operation with an AI partner that was dumb and quests that were too reliant on finding items for someone.  In late July of last year I picked up a few Wii games, one of which was the first Epic Mickey.  Since I never had the chance to play the game when it first came out I was excited by the fact that I finally owned this game; although I still had some skepticism about whether the game would be good or not after playing the lackluster sequel.

Epic Mickey followed Mickey Mouse, who notices something strange going on with his mirror.  When investigating the mirror he notices another room on the other side, and he steps through the mirror to find a workshop occupied by the wizard from the Sorcerer's Apprentice section of the movie Fantasia.  Mickey notices a map the wizard is applying pain to, and when the wizard leaves the room, Mickey sneaks in and starts to apply paint to the map before accidentally spilling the entire canister of paint, which causes an ink monster to start forming that tries to grab Mickey, but he manages to escape.  Sometime after this event, the monster returns and manages to find and capture Mickey, taking him into the map, which is actually a world called Wasteland.  Mickey finds out that the creature he created is called the Phantom Blot and that it is working together with the Mad Doctor and Oswald the Lucky Rabbit, who is helping the two due to the jealousy he has regarding Mickey.  After escaping captivity, Mickey escapes and learns that the paint he spilled all over Wasteland has caused massive damage to the land.  Knowing that he is the one responsible for this mess, Mickey sets out on a quest to find Oswald and try to convince him to help find and stop the Mad Doctor and the Phantom Blot from carrying out their evil plans.

While it takes a couple of hours for events to kick into gear, Epic Mickey's story is nevertheless a moderately compelling tale with different themes, one of which is the theme of learning to stop being jealous of those more successful than you and learning to work with this person, regardless of their stance in society.  This theme ties directly to Oswald; in reality, Oswald the Lucky Rabbit was Walt Disney's first creation, but due to rights issues, Walt lost the rights to Oswald and he ended up creating Mickey Mouse, who became an icon of animation while Oswald faded into obscurity.  This game reintroduced Oswald into today's society and since then he has been considered part of the Disney franchise.  This is good because Oswald is the most memorable part of the entire game, you understand why he feels jealous about Mickey as well as his decision to help the bad guys at the beginning of the game.

Although the story is enjoyable and one could see it working as an animated, feature length Disney film; the one disappointing aspect of Epic Mickey's story is the Mad Doctor.  His potential as an interesting bad guy is wasted as he is absent for a large portion of the game and his eventual defeat later on is anticlimactic.

Since Epic Mickey 2's gameplay was of the same style of this game, then it means that similarities between the two installments are present.  The gameplay is a mixture of platforming, puzzle solving, combat, and exploration with a bit of morality choice mixed in.  Throughout the game, Mickey will travel to various worlds inspired by the films, cartoons, and theme park attractions of Disney, and each of these worlds has quests to complete, puzzles to solve, and bad guys to defeat.  Yet, in certain regards, Epic Mickey's gameplay is better than the sequel's, and it's not because there isn't a moronic AI partner Mickey is partnered up with; rather, it's in quest progression that the game fares better than the follow-up.  In Epic Mickey 2, there was no real purpose to completing the side quests as the rewards were meager and the items you were required to find were normally in a different world that you wouldn't reach for a while.  Fortunately, this game's side quests have a purpose since the rewards are helpful and the items needed by the quest giver can normally found within the current level.  Even though the side quests are still reliant on having you find a certain number of items, main quests not as much, I didn't mind doing these tasks most of the time.

When Mickey has to travel to another world, he jumps into a film projector that drops him into a side-scrolling level based off of a segment from an old Disney cartoon.  Although most of the levels are short they are nevertheless fun to navigate, especially when jumping through or over sections based off of a particular moment in the cartoon.

One of Epic Mickey 2's positives was the emphasis the game put on the decisions you made when confronting enemies and bosses or when helping people out, all of which still holds true in the game.  Like in the sequel, Mickey wields a paintbrush that sprays paint and thinner, depending on what button you push.  Paint restores missing sections of the environment and it can make foes friendly, while thinner dissolves environmental objects and enemies.  Depending on how you use paint and thinner and also how you decide to help the various characters you meet in Wasteland, Mickey will either be viewed in either a positive or negative light.  It's an interesting concept that helps give the gameplay a sense of uniqueness, and for a large portion of the time, the choices you make can have a significant effect, but not always.  There are certain times when choosing to do things the right way is quite simple and not entirely fulfilling, and then there are times when it can be exploitable.

Hidden within most levels, particularly the puzzle areas, are creatures called Gremlins (no, not those Gremlins) that can help Mickey by fixing up various contraptions or completing puzzles for him after they have been freed from the cage they are being held in.  Because of how easy these guys can be easy to find and free, it removes a lot of the complexity some of the puzzles offer since you know that somewhere in the room of the puzzle there may be a Gremlin to free.

If there's one positive aspect that both of the Epic Mickey games share, it's their visual style.  Epic Mickey's graphics do a great job at capturing the look and feel of a Disney cartoon, but some of the game's levels do have a mildly dark and twisted vibe to them that are slightly reminiscent of Tim Burton's visual style seen in most of his movies. When it comes to voice acting, it's an interesting scenario; instead of using spoken dialogue, all of the characters, save for the narrator, speak in grunts and mumbles.  This direction in voice work is one I don't mind as it further carries the feeling of an old cartoon that the game's visual style emulates.  The music is very good and it fits the respective tone of each level.

Epic Mickey does have issues; the story has a rocky start and the Mad Doctor's potential villainy is wasted due to a lack of significant screentime.  The gameplay, for the most part, is a lot more fun in execution than the sequel's since it lacks the forced co-op and it's also not as tedious as Epic Mickey 2.  Although the game's morality system, while fairly developed, can sometimes come across as not entirely fulfilling or in certain cases, it can feel like cheating.  Nevertheless, this was a game I still enjoyed, despite the flaws present.

Posted by William Lowery at 9:34 AM