Batman: The Brave and the Bold the Videogame (Wii) Review 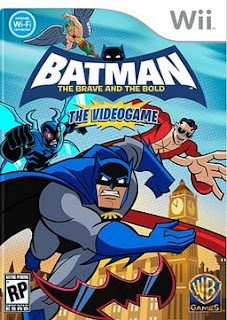 When it comes to comics, one of the most iconic figures in the medium has to be Batman.  As the son of wealthy parents who were murdered right before his eyes, Bruce Wayne decided to commit the remainder of his life to fighting crime on the streets of Gotham City.  Although a majority of the comics, film, and television interpretations have portrayed him in a serious matter, there have been times where he was portrayed in a more light-hearted manner.  There is, of course, the 1960's TV show but a more recent example would be the animated series Batman: The Brave and the Bold, in which the Caped Crusader teams up with various heroes from different DC Comics properties in order to take down the villain of the current episode.  In 2010, developer Wayforward Studios, the same studio responsible for Aliens: Infestation, created a game based off of the show that was released for the Wii and DS.

Batman: The Brave and the Bold's story follows the format of the TV show by having four episodes, each with their own, individual storyline.  The first episode follows Batman and Robin as they try to track down Catman and Catwoman, who have teamed up to find and steal an ancient jewel that can transform people into cats.  The next episode involves Batman and the new Blue Beetle, Jaime Reyes, travelling to Science Island, which was founded by the original Blue Beetle, Ted Kord, to stop Gorilla Grodd, who has made his way to the island to try and secure control of the technology being developed on the island.  The third episode has Batman working with Hawkman to track down Gentleman Ghost and the last episode is Batman and recent Green Lantern member Guy Gardner tracking down Starro and Mongul after the two were accidentally released by Guy after hearing taunting from a captured Mongul.

As a whole, the different stories of the episodes are compelling and the scenarios and writing make these episodes feel like ones you would see in the show.  The show's best aspect is how it uses different heroes and villains a lot of people haven't even heard of, which is utilized well in this game.  Some of the heroes and villains are recognizable like Robin, Hawkman, and Two Face, and Catwoman, but there are also a share of heroes and villains that are a bit more obscure, such as Blue Beetle, Catman, and Starro.  Additionally, two of the episodes share similar subject matter about how the particular partner doesn't feel like they can't live up to the namesake of the role they have take up.  The heroes, in question, are Blue Beetle and Guy Gardner and over the course of these episodes, and through Batman's conversations with them, they learn to be confident and do their best, knowing that it's up to them to decide who they are.

Batman: The Brave and the Bold is a 2D, sidescrolling beat-em up.  For a majority of the game, Batman and whoever he is teamed up with will make their way through the episode's levels, beating up various thugs along the way.  Before each level, you can choose either Batman or the current episode's hero, and you'll want to try out the other heroes besides Batman as each one has their own moves and gadgets they an use during fights.  Batman has access to various gadgets including batarangs, explosive charges, and gauntlets that increase his damage if you hold down the z button; he can also purchase new gadgets as well as upgrade ones he already has in between levels.  The different allies that help Batman also have their own gadgets; Blue Beetle can utilize his suit for different purposes, Robin carries similar gadgets to Batman's, Hawkman's gadgets, with the exception of his spear, act as either health or combat boosts, and Guy Gardner can summon different objects using his Green Lantern ring.  Like with Batman's gadgets, all of the respective heroes' gadgets can be upgraded using coins obtained from either defeating enemies or by finding money bonuses hidden in every level.

Regardless of who you choose to play as, Batman and his current ally face a limited variety of enemies which include standard thugs, thugs armed with a weapon such as a machine gun or a sword, floating mines, and a special enemy type every so often.  At the end of an episode, there is a fight with the villain of that episode, and these fights are fun as each boss has their own tactics and requires different attacks in order to defeat them.  One of my favorite fights in the game is the fight with Starro, as the fight plays out like a 2D shooter a' la Gradius.  Although during the fight against Mongul I encountered a bizarre glitch in which he got frozen in the middle of a transition to his next attack, and my partner and I just punched him repeatedly until the fight was over.

Batman: The Brave and the Bold the Videogame is fun to play, but there are a couple of issues.  The biggest issue is the game's repetitive nature; since you spend a large part of the game beating up thugs and other enemy types, monotony will sink in.  There are moments here and there in which you do something else besides beat up goons, like the boss fights, but such moments are few and far between.  Also, while the AI for your ally is alright during fights, in the platforming parts of a level, the AI can get incompetent.  Frequently, they will fail to keep up with you or they will get stuck on a platform, and when the platform is over lava, it means they're going to die and respawn.  Speaking of which, dying in this game isn't much of an issue since the only penalty is losing one hundred coins and you respawn near where you died.

From a visual standpoint, Wayforward Studios did a great job at capturing the look and animation style of the show.  Characters and environments have a 2D look while the backgrounds are in 3D, and it looks solid.  One minor complaint I do have with the graphics are the stiff looking models used in the dialogue exchanges, which can look laughable due to the stilted facial movements.  The voice acting is good; nearly every actor from the animated show reprises their role, including Diedrich Bader, who voices Batman, Grey DeLisle, Will Friedle, and John DiMaggio, among others.  Equally good is the music, which is very energetic and a majority of the music has a jazzy feel to it.

Batman: The Brave and the Bold the Videogame is a solid beat-em up that fans of the show will enjoy since this game successfully emulates the writing, storytelling, and animation the show utilizes.  For those that aren't fans of the show, the game is still enjoyable thanks to combat that is fun due to the different characters to play as and the various gadgets that they can use.