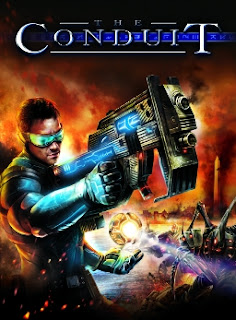 Here is the other review that was supposed to be published in November, The Conduit.  After this review is published, the reviews for December will go up starting next week.

Nostalgia is a tricky concept; I say this because there are titles that people have grown up with, whether it be movies or games, which can still be said to have held up well even to this day.  However, there are also titles that people may have liked when they were younger, but now that they are older and their tastes have matured, they realize that a particular title that they may have liked when they were younger has not held up well.  That was a realization I had replaying The Conduit for the purpose of this review.  When I was fourteen, I really liked this game, as it was one of the first FPS's that I had every played, but since I have gotten older and have matured both as a person and as a gamer, playing this game now made me realize that The Conduit is not as good as I remembered it too be; rather, the game is mediocre.

Conduit's story follows Michael Ford, a Secret Service agent who has been enlisted into a mysterious organization called The Trust, led by John Adams, in order to find and stop a terrorist known as Prometheus.  In the midst of this hunt for the terrorist, Ford runs into many strange things; a mysterious gas that can resurrect fallen soldiers, Trust agents who have gone rogue in order to help Prometheus, and worst of all, an alien invasion by a race of aliens called the Drudge.  Yet, nearly a third of the way into the game, Prometheus contacts Michael Ford and tells him that Adams is the one responsible for the gas, the rogue Trust agents, and the alien invasion that is gradually taking over Washington, D.C.  With no other choice left, Ford decides to work with Prometheus in order to stop Adams from taking over Washington and possibly, the world.

The Conduit's story is uninspired and generic; the story feels like it was largely pulled from The Big Book of Science Fiction Clichés, and the writers did not do anything interesting with the familiar territory that the plot treads.  At times, there are glimmers of uniqueness in this predictable story, but such moments don't happen until late in the game, and it isn't helped by the abrupt, cliffhanger ending, which deliberately hints at a sequel.  Characters are also forgettable as well; Michael Ford is a dull protagonist who spends a large portion of the game asking Prometheus why these events are happening, and Prometheus either gives him a response or none at all.  John Adams is an equally uninteresting bad guy; his reasons for wanting to take over Washington are predictable and he remains absent for most of the campaign; not reappearing until near the end of the game.

In spite of the weak story and characters, one of The Conduit's biggest strengths are the controls, which are great.  The most impressive part of the controls are the large amount of options you are given to adjust them to your liking.  You can swap buttons around, alter the aiming speed, and even adjust the placement of the game's HUD.

Despite having impressive controls, The Conduit's other big issue, besides the lackluster story and boring characters, is the gameplay, which isn't terrible, just uninspired.  The main issues with the gameplay are a lack of variety during the campaign, very linear levels, and bad AI.  Most of the campaign is spent heading from one point to another, shooting any human or Drudge forces that get in your way.  The few instances of variety in the campaign come from a device, the All-Seeing Eye.  In the second level, Ford acquires this sorely underutilized device.  I call it that because this device is primarily used to open doors; though the ASE does have a few other functions.  Most of the levels contain hidden messages that can only be seen and deciphered by using the ASE; there are also floating discs hidden in each level that unlock concept art, but my favorite usage of the device is when it acts as a puzzle solver for hidden symbol puzzles that when solved, reveal a secret room containing ammo and a special prototype weapon.  However, this device could have been used for more creative purposes besides for unlocking doors and finding hidden secrets; if anything, there should have been hacking puzzles that could have been solved using this device; unfortunately, such possibilities were wasted.

As for the shooting, it's good.  Ford gets access to a large variety of weapons over the course of the campaign.  He can use standard human weapons like assault rifles, shotguns, and SMGs, but he can also acquire interesting weaponry used by the Trust and the Drudge.  Drudge weapons include the Strike Rifle, which can fire regular shots, but by holding the fire button, this weapon can launch a more powerful shot that can instantly kill most enemies, and the Warp Pistol, which functions a lot like the Strike Rifle, yet when the fire button is held down, it can fire shots that can bounce off of walls.  With the Trust weapons, there's the TPC Launcher, which launches plasma grenades, and the Carbonizer MK16, which can launch powerful beams of energy that instantly decimate any enemy types.

Going back to the issues with the gameplay, the levels are very linear and only a few sections of the levels are more open areas.  The last problem with the gameplay is the bad AI.  Most of the time, enemies stand out in the open, rarely relying on cover; it makes sense when the smaller enemies like the mites, both normal and explosive, run and charge at Ford to attack him, but when the regular human and Drudge enemies are rarely relying on cover and instead are absorbing bullets, then it means the game is a relative cakewalk, even after raising the difficulty up.  However, in the last two levels there's a sharp spike in difficulty and soon I'm facing multiple, unfair deaths, which surprised me, given how easy the game had been prior to those levels.  In addition to lacking variety and having very linear levels, The Conduit is also very short, taking me about four hours to beat the campaign, and it could have probably taken me three hours weren't it for the multiple deaths I encountered during those last two levels.

However, while the gameplay may be functional, but largely unspectacular, the visuals of The Conduit are quite good, almost near HD, but even the graphics have a few problems.  Even though the game is set in and around Washington, D.C., with some of the levels set in iconic landmarks such as the White House, the Pentagon, and the Library of Congress; the levels all feel alike and aside from the novelty of fighting humans and aliens within such landmarks, nothing else about these levels stands out.  Also, a common glitch in this game is when enemies, particularly the small enemies like the mites, get frozen in time either before or after they've been killed.  It's a little amusing seeing an enemy frozen in time, occasionally flinching if you go near them.  The sound is nothing to write home about; while the guns sound good, the voice acting and music are fairly average.

Time has not been fair to The Conduit; from a technical standpoint, the game is good due to its solid graphics and great controls, but the story is predictable and weak and the gameplay could have been more fun and varied.  When this game was first released, one of the aspects of The Conduit that was praised a lot was its online multiplayer, but since I never got the chance to try it out, and for that matter, Nintendo shut down online multiplayer functionality for the Wii and DS, I can't say for myself what it was like.  Then again, my reviews focus on the single player content of the game, and rarely have I mentioned the multiplayer aspect of a game.  In the end, the best way to describe The Conduit is that it had potential to be something great, but that potential was wasted and instead, we got a mediocre game.