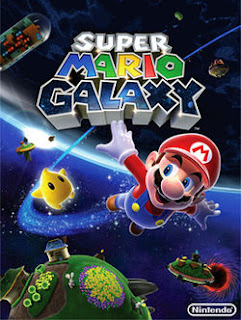 Apologies to the minor delay; this review, along with a review of The Conduit, were both going to be released around the week of Thanksgiving.  However, relaxation told me to take a little break during my week of from school, which I will not allow to happen again.  Regardless, here is the review of Super Mario Galaxy and a couple of days later, the review of The Conduit will be published.

On the night of a celebration in honor of a comet that passes the Mushroom Kingdom every one hundred years, Mario has been invited by Princess Peach to come and enjoy the festivities.  Shortly after arriving at Peach's castle, archrival Bowser shows up with an armada of airships and a UFO that lifts the castle off of the ground and into space.  Bowser grabs Peach and despite Mario's efforts to try and stop Bowser from kidnapping her, he fails and gets launched into space.  Fortunately, Mario is saved by a mysterious creature called a Luma who takes him to an observatory run by Rosalina.  She explains to Mario that Bowser stole the power stars, which act as a power source for her ship, and he plans on using those power stars to take over the galaxy.  Now Mario must collect the power stars back from Bowser and his minions as well as save the princess from his evil clutches.

Even though Super Mario Galaxy's story is pretty basic, it does have a bit more depth than usual when compared to the simple set-ups of a story found in prior Super Mario games.  The first reason is because Bowser's plan in this game threatens the entire galaxy and not just the Mushroom Kingdom.  The other reason, and what is also my favorite aspect of the story, is the introduction of Rosalina.  When Mario firsts meets her she comes off as mysterious, but she is more than willing to help him save Peach and stop Bowser; yet as the game progresses, chapters of a short story can be unlocked for viewing which explain her backstory, and this gives us a better understanding of who she is.

Since Super Mario Galaxy is a game for the Wii one would assume that motion controls would be used, which they are, but sparingly.  By aiming the Wii Remote you can collect star bits, more on those later, and shaking the Wii Remote causes Mario to spin, which can be used as a means to stun enemies, but this move can also be used to briefly extend Mario's time in the air when he jumps, which can be a life saver should you narrowly miss a platform or ledge.  There are a couple of levels which solely rely on motion controls.  In one level, Mario must navigate a ball containing a power star; this level requires the remote to be held upward and tilted like a joystick.  In another level, you steer a manta ray by tilting the remote.  As a whole, the controls are very good and the motion controls feel fine, with the exception of the controls for the manta ray as the steering felt too loose.

Super Mario Galaxy's biggest hook is its setting, space.  In Rosalina's observatory there are different rooms that act as gateways into the different levels, or galaxies, of the game.  Each of the game's galaxies offers up something new for the player either through new power-ups or through varied level design.  Some galaxies do have recurring themes to them, like tropical, desert, or winter motifs, but there are plenty of galaxies that offer up something interesting with their level designs.  For example, there's one level early on in the game that is set on a giant war machine that Mario must navigate his way to the top of in order to shut down the machine and retrieve the power star being used as a power source.  Another level late in the game looks like it was constructed out of toys normally found in a young boy's room.

Power-ups play a prominent role in Super Mario Galaxy and they are used for different purposes.  The power-ups are used to progress onwards in a level or to help retrieve a star within the level.  The power-ups include the fire flower, which allows Mario to throw fireballs, but the power-up only lasts about thirty seconds, meaning you have to be quick when using it as soon as Mario picks it up.  The ice flower is similar to the fire flower in that Mario can throw projectiles with this ability, but when it's active the ice flower allows Mario to run over, which instantly freezes beneath his feet.  The spring suit allows Mario to reach high areas if his jumps are timed right, and finally, the power star makes Mario invincible for a brief period of time, and this power-up is the rarest of the bunch.  With the exception of the fire flower and the spring suit, the other power-ups are fun to use.

Each level initially offers three stars that can be found; though some galaxies only have one star for Mario to earn, but most of the levels with three stars to find also offer an additional three or four stars that are found either by discovering hidden areas or by completing a specific challenge.  Whenever you pick a galaxy there may be a comet passing near it, and choosing the level with a nearby comet automatically puts you into a challenge, and the conditions of the challenge varies depending on the type of challenge comet.  These challenge comets will have you defeating a boss with only one health point, racing against a shadowy clone of Mario, beating the level within a certain time limit, or collecting one hundred purple coins.  There are a total of 128 stars to collect in this game, but only 64 are required in order to defeat Bowser and beat the game.  Afterwards, you can go back and collect the remaining stars.  What happens when you collect all 128 stars?  I'm not mentioning.

Rosalina's observatory acts as a hub for Mario.  The different areas of her observatory where the galaxies can be found will only become accessible after you collect a certain number of stars and defeat the major boss, which is either a confrontation with Bowser or his son, for the area with galaxies currently active.  Also, as the game progresses, new NPCs will show up on the observatory that Mario can interact with, which may result in extra lives.

Every galaxy contains coins for Mario to collect, but new to this game are star bits.  This new form of currency serves two purposes.  In certain levels and in the observatory there are hungry Lumas that can transform into something, usually a launch star that launches Mario to a hidden galaxy, but only after Mario has fed the Luma a certain number of star bits.  Star bits also act as a means of defense against enemies; aiming the Wii Remote and pressing the B button launches star bits that can stun some, but not all, types of enemies.  Additionally, for every fifty star bits Mario collects he earns an extra life, and since star bits are plentiful in each galaxy, Mario will never run out of lives.

Super Mario Galaxy is very fun and entertaining, but it's also not a difficult game.  The game's difficulty falls in between easy and hard by being acceptably challenging.  Some of the galaxies in the game will test your platforming skills, especially the comet challenges, but the game is relatively fair in its challenge.  Unfortunately, the boss fights of Super Mario Galaxy aren't that challenging; they're fun to fight, but the simple methods that are used to defeat them means you really shouldn't die during these encounters.

Super Mario Galaxy's bright and colorful visuals make this title one of the best looking games on the Wii.  Even though the Wii wasn't as visually powerful as the Xbox 360 and PlayStation 3; this game, along with other titles for the system such as Sonic Colors, the Legend of Zelda games, and the Goldeneye remake showed that you can work with the hardware limitations to produce strong visuals, and Super Mario Galaxy is a testament to that.  Voice acting, though minimal, is good, but the highlight of the sound design is the music, which successfully fits the tone of each level by either being fun and light hearted or grand and orchestral is the level calls for such music.

Regardless of your own personal history with the Mario franchise, there's no denying that Super Mario Galaxy is a great platformer that succeeds due to the introduction of the new setting, space.  This allows for level design that is creative and unique, and thus, the game is a fun experience from beginning to end.

Posted by William Lowery at 1:24 PM