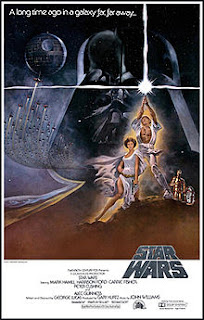 2015 has been an interesting year for cinema due to the revivals of different film franchises from the past.  Jurassic Park got a new sequel in the form of Jurassic World, the Mad Max series returned after thirty years with the movie Mad Max: Fury Road, and now Star Wars, which hasn't had an official film follow-up in ten years, not counting the movie based off of the Clone Wars TV show that was released seven years ago, is returning to cinema with The Force Awakens.  The hype for this movie has been huge; ever since the film was first announced, people have been waiting in anticipation for this film.  This has been an interesting experience for me, since this new movie has helped rekindle my interest in Star Wars.  The last time I watched any of the original six films was about seven years ago; after that, I lost interest in the series.  While I played some of the games that came out during that period of time like The Force Unleashed games and the LEGO games, I otherwise stayed away from the franchise.  Yet, in honor of the release of this new film, I decided to revisit the original movie that started it all, and see how the film has held up since I last saw it seven years ago; fortunately, this is still an excellent movie.

A New Hope follows a young man named Luke Skywalker, who lives with his aunt and uncle on the desert planet Tatooine.  His uncle purchases a pair of droids from traveling scavengers known as Jawas; unbeknownst to Luke, these two droids, C-3PO and R2-D2, have come from a Rebel space cruiser that was fleeing one of the Empire's Star Destroyers, which was trying to hunt down plans the Rebels had stolen from them regarding their superweapon, the Death Star.  The plans were stored into R2-D2 by Princess Leia, who also put in a message for Obi-Wan Kenobi, a former Jedi master who may be able to help the Rebellion.  The only Kenobi Luke knows about is an old hermit named Ben Kenobi, who lives out in the desert, away from civilization.  Luke inadvertently encounters Ben after he saves Luke and the droids from an attack by the Tuskan Raiders.  Ben takes them to his place and reveals to Luke that he is Obi-Wan Kenobi and that he knew Luke's father back when he was a Jedi master, and he gives Luke his father's old lightsaber, while also revealing to Luke that his father died at the hands of a man known as Darth Vader.  The message put into R2 reveals that Leia wants the plans to be taken to her home planet, Alderaan.

Ben asks for Luke's assistance in this since Ben is old, but at first, Luke has doubts about being involved with such an ordeal.  After Luke witnesses the loss of his aunt and uncle, he decides to go with Ben who has promised to train Luke how to become a Jedi.  Luke, Ben, and the droids head to the city of Mos Eisley in order to find someone who can take them to Alderaan, and they find a smuggler named Han Solo, who agrees to take them to Alderaan.  After encountering Stormtroopers looking for the droids, the group escapes aboard Han's ship, the Millennium Falcon, and they head to Alderaan, yet when they get there the planet is not there.  Alderaan has been blown up by the Death Star after Leia give Darth Vader and his advisor, Grand Moff Tarkin, misleading information about the location of the plans.  Luke, Han, and the others follow one of the Empire's TIE Fighters to the Death Star, and after sneaking in, they discover Leia is being held in captivity.  Luke, Han, his partner Chewbacca, go search for the princess, and Ben goes off on his own for personal reasons.

One of the interesting aspects of A New Hope is how it borrows elements from different genres of film and merges them into this one movie, while also putting an interesting twist on these elements through the film's sci-fi setting and characters.  Scenes in the movie where the Rebels' X-Wings engage in dogfights with the Empire's TIE Fighters are very reminiscent of dog fights between planes in war movies and real life events, and the sequence where Ben and Luke go into the Mos Eisley Cantina to find a pilot is similar to that of the bar scenes found in westerns, complete with an encounter between Han and a bounty hunter named Greedo that is inspired by the showdown duels of many westerns.  Additionally, the opening text crawl of the Star Wars movies is very much inspired by the text crawls of film serials from the 30's and 40's.

A New Hope and the other two films of the original trilogy are known for their memorable characters and the arcs some of them go through over the course of not just this movie, but the other two movies as well.  This is best exemplified by Luke Skywalker; when he is first introduced, he is initially skeptical about being involved in such a big conflict, but over the course of this movie Luke gradually becomes more confident about being involved with this huge ordeal, and in the following movies, he becomes a wiser and nobler person.  Similar to Luke, Han Solo is initially a cocky and overconfident person, and he only decides to help Luke and Ben because Princess Leia is rich, but by the end of the movie Han changes as well and he decides to switch his efforts from smuggling to helping the Rebels fight the Empire.

Besides featuring memorable protagonists, A New Hope also features one of the most iconic villains of all time, Darth Vader.  When he is onscreen, you feel his foreboding presence; he's cold, calculating, and determined to bring an end to the Rebels' efforts to try and bring down the Empire.  Although it's Vader's advisor, Grand Moff Tarkin, who is the one that gives orders to the Death Star's men, and Vader complies with his orders most of the time.

Another thing this movie does right is the way it establishes a universe filled with interesting worlds, creatures, and a history the audience wants to know more about.  The previously mentioned cantina sequence is a great example of showing off the diverse array of creatures in just one, small setting; there are plenty of unique creatures in this sequence, besides the regular humans.  Additionally, the movie establishes a history we want to know more about through certain dialogue exchanges in the movie, such as when Ben explains to Luke about his years as a Jedi knight and how Darth Vader came to be.

Effects-wise, this movie's effects have held up well, mostly.  It's a little hard to believe that A New Hope was made on a budget of $10,000,000, considering the impressive work the filmmakers did.  The fight sequences between the X-Wings and the TIE Fighters stand out as the highlight of the strong effects of this movie, but where the effects falter are through some glaring alterations, a.k.a., the Special Edition changes. For those who don't know, in 1997, in honor of the 20th anniversary of this movie, the original three Star Wars movies were re-released in theaters with added-in effects and altered scenes; since then, when the original trilogy was released on DVD and Blu-Ray, more changes have been made.  I'm not going to go into great detail on what changes were made in all three films, all you need to know is the additions and changes made were mostly unnecessary, and they stick out like a sore thumb.  To me, the worst change that was made in A New Hope was the outcome of the encounter between Han and Greedo.  In the original cut, Han shot Greedo, but in the Special Edition, they both shoot simultaneously, and it's quite laughable, seeing Han casually shift his head over to the side to avoid blaster fire.

According to George Lucas, the director of A New Hope, his reasoning behind the changes is because "films never get finished, they get abandoned."  However, due to the decisions Lucas made for the additions and alterations, most people give Lucas a lot of flak, both for this and for the heavily divisive prequel trilogy.  Regardless of his own reasoning behind why he made these changes, it's always a matter of how the public will respond to it.  Now the alterations and additions aren't as prevalent in the movies as most people make it out to be; in fact, I would say only about five percent of A New Hope has been altered through the changes and additions, while the other ninety-five percent is the original film, but can't overlook the fact that these alterations alienate the original film, rather than improve it.

In addition to having great effects, A New Hope also features iconic music, which is the work of renowned composer John Williams.  He does a great job with the music, which is instantly memorable and can easily get stuck in your head, and his excellent music quality carried on throughout the remainder of the films he has composed in the series.

Any issues people have with this movie are just minor nitpicks, besides the problems of the Special Edition changes.  Such nitpicks include why the Death star, a powerful superweapon, has such a bizarre weak spot, a ventilation shaft that leads directly into the core of the Death Star, or why Stormtroopers, despite being an iconic military force, can't hit anything with their blasters most of the time?  We overlook such minor problems because of how great this movie is.  The plot, characters, locations, vehicles, and weapons have all become icons of not just science fiction, but film in general.  Not only that, but the movie borrows elements from other genres of films in a way that is unique and not retreading old ground.  Long story short, A New Hope shall, and will always be, an iconic movie.