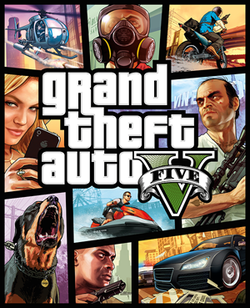 2015 is almost at an end but before this year wraps and we move ahead into 2016, I present a review of a game that is of some personal significance to me.  In honor of graduating from high school and ending the final semester with all A's, I picked this game up as my personal graduation gift.  During the summer, when I wasn't working or studying martial arts, I was playing this game.  The game was thoroughly compelling and hard to put down for different reasons that shall be explained in this review.


Grand Theft Auto V focuses on three different protagonists, starting with Michael Townley, a former thief who is rich, living in witness protection, and someone who misses the days when he was robbing banks and committing other crimes and not trying to keep his dysfunctional family intact.  Next, there's Franklin, a repoman and part-time gangster who wants to do more with his life but he can't due to his friend Lamar, who has a penchant for getting himself and Franklin in hot water with rival gangs, and his aunt that is more focused on other things besides her nephew.  Rounding out the three protagonists is one Trevor Philips, a man who lives in the backwoods area of San Andreas, spending a large portion of his time running drugs and doing his best to tick off everybody that he sees.  Through a series of events, the three end up working together to help various corrupt individuals get what they want while also trying to manage their own individual lives.

Grand Theft Auto V's compelling story does a great job at keeping the right pace, shifting the story back and forth between the characters' own lives and the multiple times they have to work together on a job for someone.  The story is filled with many twists and turns; secrets about the main protagonists are revealed, some of which tie into the history of Michael and Trevor, as the two of them used to work together back when Michael was still a crook.  Although the game is serious in tone, the excellent pacing of the game knows which parts should be serious and when to punctuate various moments with humor.  Said humor largely comes from a character's actions or through their dialogue and through the satirical portrayal of America's culture and society.  Besides having a great storyline with strong pacing, Michael, Franklin, and Trevor are memorable protagonists.  The game's sharp writing does a great job at highlighting dilemmas a character may be facing, like Michael and his attempts to keep his family together.  Of the three protagonists, Trevor is the highlight as his schizophrenic behavior and actions make him unpredictable, since you don't know when he might get ticked off by somebody or what he plans to do to said individual.

While Grand Theft Auto V's story and characters are excellent, one problem with the pacing is that of the three characters, Franklin has the least amount of screentime.  It's not that he's a uninteresting character, but as the story progresses you notice that it becomes more focused on Michael and Trevor while Franklin ends up acting as assistance to the characters when needed; though at the end of the game his role in the story is more significant as he has to make a penultimate decision regarding Michael and Trevor.

Much like the previous games in the series, Grand Theft Auto V is an open world game, but this installments raises the stakes by offering three characters to switch between and play as.  For a majority of the game, you can freely switch between the three, and while none of them necessarily control differently, each does have their own set of various stats and their own special ability, as well as their own bank accounts, friends, and people they can encounter in the game's side missions.  In the game's HUD, there's a yellow meter that gradually fills up; when filled, either of the three characters can perform their special ability.  Franklin can slow down time while driving, which is useful when driving through busy streets.  Michael can also slow down time but only during combat, and Trevor has a rage mode that makes him nearly invulnerable and increases the damage of his fists and weapons.  The various stats a character has are for different things like driving, shooting accuracy, and stamina, and if you keep performing in these different aspects, then they naturally get better.

When it comes to things to do in Grand Theft Auto V, the world of San Andreas is filled with many different activities and various side quests.  Each of the three characters can participate in side missions called Strangers and Freaks, in which one of the characters you're currently playing as encounters a person who corrals you into getting involved with the thing they're about to do.  For example, Franklin encounters a photographer who's trying to get pictures of celebrities in embarrassing situations.  As you drive around San Andreas, a random event may pop up that you can choose to partake in or not; these events normally involve stopping a thief or escorting a stranded bystander to safety.  Besides the side missions, there are also various activities to participate in as well, including different sports like golf and tennis, street and sea races, skydiving, and many other activities.  Of course, you can choose not to do the side missions or the activities and just cruise around San Andreas, or go on a rampage and blow everything to kingdom come.

Should you attract the attention of the police, evading them isn't much of an issue, even on higher wanted levels.  If you manage to avoid their attention, then the cops will start to look for you, getting near the field of vision means the wanted level still remains and they know where you are.  If you stay out of their sight long enough, then the wanted level drops.  As such, avoiding the pursuing cops isn't too hard, especially when you compare police evasion in the older entries like Grand Theft Auto III, and getting rid of your wanted level is usually as easy as driving really fast or if you're roaming the countryside, go up into the hilly areas where their cars can't reach you.

Much like how the side content is diverse and interesting, the story missions are equally varied.  There are sixty-nine story missions total, and since each one is varied in their own way then it means repetition never becomes an issue, given the massive amount of missions.  In fact, the diversity of these missions surprised me, one of my favorite missions involved one of the characters trying to track down another character that was being held captive, and the person looking for the other one had to rely on a tracking device within their phone to pinpoint where exactly he was being held.  An earlier mission in the game had Trevor posing as a dock worker to retrieve important information, and during the mission you have to operate a crane in order to load shipping containers onto an eighteen wheeler before Trevor could proceed.  One type of story mission, however, that does stand out are the heists; although there are only about four in total these complex missions involve planning, finding the right members for your team, and determining the best method to use in the heist.  The payoff for a successful heist?  A large sum of money

Grand Theft Auto V, from a technical standpoint, is great.  Rockstar Games did a great job at making the city feel like a lively and active environment with pedestrians who will go about their daily routines until you start acting aggressive to them, in which case they'll either flee or try to fight back.  The voice acting is top notch, but one issue I do have with the acting is that the dialogue can occasionally be overreliant on swearing or ethnic slurs if Franklin and Lamar were talking; while I do understand that this is a game intended for mature players, the overusage of swearing can come off as childish.  The radio stations that are available to listen to when driving encompass a wide selection of different music genres; including classic rock, old school funk, country, modern pop, among other genres.  The composed music used during the missions is good and its ambient nature helps set the tone of a mission.

In short, Grand Theft Auto V was an amazing title and one I'm glad I spent so much time with.  It's a game with a memorable story and characters, as well as gameplay that will keep you playing through the varied missions and diverse selection of activities.  If you haven't played this game yet, I strongly suggest you do.