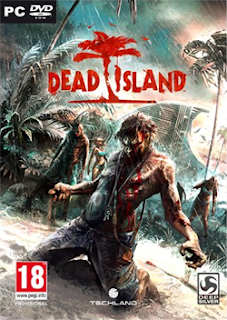 It's that time of the year again; a time in which families get together to celebrate Christmas and everything that is good about the holidays.  Yet, some families do things differently than other families, like travel to a place during the holidays, and just somewhere in America, but to a destination elsewhere.  If your family is choosing a place to travel to, my best recommendation would be anywhere that isn't the island of Banoi.  Recently, a terrible outbreak has struck the island and most of the citizens have changed, and not in a good way.  For the poor souls still trapped on the island and trying to find a way out, they're going to have to fight in order to escape; this is Dead Island.

Dead Island's story centers around the island of Banoi, a premiere vacation choice for travelers until an outbreak caused most of the people to turn into zombies.  The remaining survivors are either trying to find help and maybe a way off of the island, or have resorted to desperate measures in order to survive.  As one of four characters that are immune to the infection, since it is a video game, you must help the different groups of survivors that you encounter while also finding a way off of the island and a possible explanation for the infection that has swept over the island.

Much like the previously reviewed The Conduit, Dead Island's story is forgettable and predictable; heavily relying on tropes and clichés seen in other zombie movies or games, without adding anything interesting to the established material.  The characters are equally forgettable and the main characters are fairly stereotypical; there's Sam B., the angry black guy who says the f word a lot, Logan, a former football player from the South, Xian Mei, a Chinese woman who's an employee at a resort in Banoi, and Purna, the Aussie whose eyes look like they're on the verge of falling out whenever she is in a cutscene.  The game's tone is pretty inconsistent; the story takes itself way too seriously, featuring many moments that try to tug on your heartstrings, but fail to do so, as well as a forced message about how man is the real monster of the situation and not the zombies.  This is in stark contrast to the gameplay, which is fun and filled with plenty of laugh out loud moments, such as when you activate Sam B.'s Rage Mode, which makes him nearly invulnerable and allows him to throw punches that can send zombies flying into the air and their body parts splattering all over the place.

Speaking of which, Dead Island's gameplay is best describe as a mixture between the RPG elements of Borderlands and the melee combat of Dead Rising; however, Dead Island uses a first person perspective and not a third person perspective.  Since melee combat is the main method used to deal with enemies, it can be a little tricky at first when trying to tell if your hits are connecting with the zombie or not, but you quickly adjust to the usage of melee weapons in the first person perspective.  Like Borderlands, Dead Island has you earning XP to level up by killing enemies, or by completing main and side missions.  The four characters you can choose to play from each specializes in their own types of weapons; for example, Sam B., the character I played as, specializes in blunt weapons like axes and sledgehammers.  Each of the four characters also has their own skill trees that skill points, earned from leveling up, can be put into that benefit your character or their weapon types.

Similar to Dead Rising, there is an emphasis on using melee weapons against enemies, while there are guns, such weapons don't show up until the city section of the game and even then, ammunition is scarce and guns are best recommended for use against the human enemies you'll occasionally encounter in the game as they're more effective against them than the zombies.  When the game first starts, you'll have to rely primarily on disposable weapons such as paddles and wood planks, but it isn't before long that you start finding real weapons to keep and use like the previously mentioned axes and sledgehammers, as well as knives, katanas, and crowbars, among other weapons to find.  These weapons have a rarity scale, similar to the one seen in Borderlands; white is common, green is less common, blue is somewhat rare, purple is very rare, and orange is highly rare.  Weapons you find and use have a durability meter, meaning you have to be careful when attacking zombies as weapons can degrade and potentially break if you're not careful.  Fortunately, there are work benches scattered across the island that allow you to upgrade weapons, repair damaged ones, or create specially modified weapons.

Modified weapons are similar in concept to the combo weapons of Dead Rising, by collecting blueprints found from either completing quests or by exploring, as well as making sure you have the right materials necessary, you can create these weapons that can devastate zombies.  Modified weapons consist of nails or barbed wire surrounding a weapon, or a weapon mixed with a certain element like fire, electricity, or toxicity.  Using these special weapons feels satisfying against zombies, especially when you land the one strike that ignites them or electrocutes them.

You'll use these weapons against the zombies and human enemies scattered around Banoi; the locations are varied, ranging from bright and sunny beaches to rundown cities and lush jungles.  Speaking of enemies, you'll face other types of zombies besides the typical, slow moving zombies seen in movies or The Walking Dead; there are fast running zombies, suicide zombies that explode when you get near them, and big zombies that can deal massive damage with their strikes.

Dead Island's combat is fun, as is leveling up your character and finding new weapons for them, but the biggest problem of Dead Island is its repetitive nature.  Nearly every single quest in the game, be it main or side, is a fetch quest; "Go find this item for me," "Hey, I need X amount of items."  Because of this, playing the game can feel like a grind, especially in long play sessions, and often, I would just sprint as much as possible in order to find the item or items a quest giver needed so I could get the missions finished quickly.

Dead Island, visually, is very uneven; the environments look good and some locations like the resort and jungle areas give a false sense of calm and peace, since you know zombies are nearby; however, there are a number of graphical issues.  NPC character models are repeated frequently, even when the game tries to hide this by swapping clothes and facial features around, and most of them have laughable facial animations.  Pop-in is also frequent as you explore the island and some of the cutscenes look unfinished due to poor lip-syncing and missing textures.  Voice acting is forgettable, aside from the zombie sounds, which are good, and Steve Blum as the voice of the lifeguard Sinamoi, the remainder of the voice acting is nothing special; however, the ambient nature of the music does a good job at making encounters with the zombies feel tense.

If you overlook the flaws of Dead Island, there is a fun game.  Combat is fun and riotous and leveling up your character and finding new weapons is enjoyable as well; though, the issues with the story and repetitive quests do sour some of the fun this game offers.