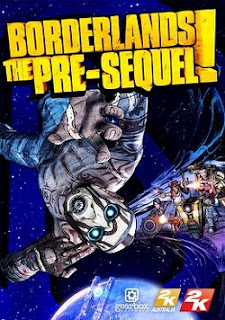 Ever since Borderlands 2 came out it has been somewhat unclear when the third installment in the series is happening.  Until the developer, Gearbox Software, officially announces Borderlands 3, developer 2K Australia, with assistance from Gearbox, are easing the wait with Borderlands: The Pre-Sequel.

As the title suggests, the game is a follow-up to Borderlands 2, but storywise, it is set in between the events of the first and second game.  Before the villain of the second game, Handsome Jack, made his rise to power and tried to destroy Pandora; he was just an employee at the Hyperion Corporation that wanted to be known for something more.  When the Hyperion Corporation's space station is taken over by General Zarpedon and her forces, Jack sees this as an opportunity to become a hero if he manages to stop Zarpedon before she can use the space station's laser to try and destroy Elpis, the moon that the space station orbits.  He contacts four vault hunters, each of which was a side character in either the first or second Borderlands, to help him stop Zarpedon.  However, over the course of the story Jack's plans change and he goes on a downward spiral, and by the end credits he will become the man that will try to bring an end to the planet Pandora.

The best part about the Pre Sequel's story is arguably Jack himself, as he initially wanted to be seen as a hero, but by the end of the game he becomes the one thing he was trying to stop at the start of the game.  In fact, the end credits song "What Makes a Good Man?" perfectly fits Jack in this game.  In previous Borderlands games, the vault hunters were basically silent protagonists, however in the Pre Sequel, the new vault hunters actually speak with other characters and as such these vault hunters feel more involved in the story.  One problem I do have with the story, however, is that at times it can feel like story events are just flying by, and while the game doesn't have a short length, the feeling that the story is just coming and going will happen during the game.

The gameplay is largely the same as it was in previous installments; in particular, this game is based off of Borderlands 2's gameplay as a number of improvements and additions that were made in that game have carried over into this game.  However, the Pre Sequel does introduce some new concepts that help differentiate the game from previous installments.  The biggest addition is the concept of zero gravity.  Since the game is set on Elpis, Pandora's moon, zero gravity has been introduced and it makes traversing the environments rather fun as you can make some long distances by jumping off of cliffs or by using one of the many jump pads scattered around the environment.  You can also perform a slam attack by pressing the crouch button when you get up in the air, which will cause your characters to slam down with extreme force.  Plus, there's something fun about getting up in the air and picking off enemies from above, and then slamming down right on top of a foe with a press of the crouch button.  However, you do need an oxygen tank if you want to avoid dying of asphyxiation.  Fortunately, having to maintain a supply of oxygen never felt tedious as enemies will drop oxygen canisters and there are numerous beacons scattered around Elpis which can be activated to generate an oxygen dome.

Two new types of weapons have been introduced in this game; laser weapons and cryo weapons, and they easily fit in with the series' massive amount of guns.  There are also two new vehicles introduced as well, a lunar rover and the Stingray, which can hover briefly and slam back down.  I mainly used the Stingray for transportation as the lunar rover's steering felt too loose and often I would slam into walls.  Of the four characters that you can choose from to play as in the Pre Sequel I chose Athena the Gladiator.  Her special ability is a shield that can she deploy to protect herself from gunfire and it can store up damage from bullets and explosions that can damage or kill an enemy when it is thrown.  She is a fun character to play as and her shield was rather useful during boss fights in the game.

The cel shaded art style is still prevalent in this installment and the overall visuals are solid.  At times, some of the locations in the game are quite interesting to look at.  However, texture pop-in was more prevalent in this game, as were some framerate drops that happened during some firefights.  I also encountered a couple of glitches.  The first one happened during one of the round in the Shock Drop Slaughter Pit DLC; I was opening up a locker to loot what was inside only to get stuck to the door of the locker and unable to free myself from it. Yet, I was able to kill most of the enemies in the current wave until one of the remaining ones managed to kill me.  Another glitch that occurred was when I returned to a previously explored area to complete a side mission, and the audio from the story mission that took place in this area started to play for an inexplicable reason.

The voice acting and writing are as good as Borderlands 2's acting and writing.  The most unique thing about the acting and writing of this game is the noticeable Australian influence.  Most of the characters you meet, as well as the citizens of Elpis have Australian accents, which was an interesting change.  The music is also a different change of tone from the music in previous games; there is a strong outer space vibe present in the music; in other words, a lot of synth.

While Borderlands: The Pre-Sequel doesn't really break new ground for the series it is still an enjoyable game thanks to a solid story and fun gameplay with some new concepts that help keep things interesting.