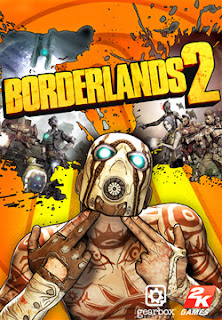 The first Borderlands  was a great game due to its strong combination of FPS and RPG elements.  It did suffer from a major problem, the lack of a real story, as well as some minor problems.  However, with this sequel, everything you liked about the first game has returned, but it all has been refined and in the case of the story, vastly improved.

At the end of the first game, the four vault hunters who were in search of a mythical vault hidden on the planet Pandora found what they were looking for.  Instead of becoming rich and powerful, however, they came up empty handed and thus, they have decided to go their own ways.  Since then, a man known as Handsome Jack came in and took credit for the discovery of the vault, tapping into a brand new element called Eridium that appeared after the opening of the vault, Jack has become not only the leader of the Hyperion Corporation but also the ruler of Pandora.  As one of four new vault hunters, your job is to find and reunite the original vault hunters in order to stop Handsome Jack from collecting pieces of a key for another vault hidden on Pandora that contains a creature known as the Warrior which Jack intends on using to eradicate life on Pandora.

Borderlands 2's story is a huge improvement over the first game's story, boasting a strong cast, sharp writing, and a fantastic villain.  If I ever made a list of my favorite video game villains, there's a strong chance that Handsome Jack would make the list.  He has an entertaining personality and a false idea that you are the bad guy and he is the savior to this planet, easily making him one of those villains you love to hate.  Not only that, but the four vault hunters from the first game are much more fleshed out when compared to their presence in the first game.  We get a much better understanding of what they're like and their overall personalities.  The writing in this game is very entertaining; there were a number of times where I found myself laughing at the dialogue in this game.  The only real issue I have with the story is that the new vault hunters feel like shadows of the original vault hunters because they're mostly silent protagonists, save for the one liners they spout during combat.

The gameplay is of the same style of the first game's gameplay but with a number of different improvements and additions that have been added that make the gameplay feel more refined and polished.  There are four different character classes to choose from; though two of the new vault hunters and their abilities are slight variations of two of the original vault hunters' abilities.  The vault hunter Maya has the ability to "Phaselock" instead of having Lilith's "Phasewalk" ability, and Axton can throw out a turret to assist him in combat, much like Roland from the first game.  With that said I played as Axton, who can throw out a turret out onto the battlefield to assist him.  Leveling up by defeating enemies, completing main and side missions, and discovering new areas earns you skill points that can be put to one of three skill trees for a vault hunters ability.  These skills can benefit both the character and their special ability.  For example, after putting in enough skill points Axton's turret now teleports to a spot on the map when it is thrown, and the turret can also shoot a barrage of rockets at an enemy, in addition to bullets.

As I stated earlier, several additions and improvements have been made to the gameplay.  The in game map is much better than the first game's map, you can now move around whenever a vault hunter goes down and into their "Last Stand" position, and a storage system has been added as well, allowing to store any guns or shields that you have acquired but you don't need in your inventory anymore.  There's also been a challenge system added called the "Badass Ranking" where completing in game challenges earns you points, and when you earn enough you get a Badass Token that can be used for one of several stat boosts for your character.

In Borderlands, the side missions could start to become repetitive after awhile; fortunately the variety has been improved in Borderlands 2.  The side missions in this sequel will have you doing tasks such as solving a murder, igniting a clan war between two groups, and helping the robot Claptrap throw a birthday party that becomes really awkward when none of the guests show up because they declined Claptrap's invitation.

The game retains the cel-shaded art style of the first game, but this time the characters and the world they inhabit are much more colorful and varied than in the first game.  Save for some minor texture pop-in that happens whenever you enter another area, this is a great looking game.  The voice acting is entertaining and it backs up the humorous writing, the highlights are the voice performances of Dameon Clarke, Ashley Burch, and David Eddings, who play Handsome Jack, Tiny Tina, and Claptrap respectively.  The music is also very good and retains the style of the first game's music.

Borderlands 2 is a great follow-up to the first game, by offering an improved story as well as refined and improved gameplay, the result is a fantastic FPS that is definitely worth playing.