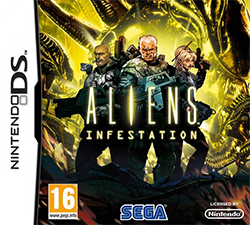 Over the course of this month, I have reviewed three different Alien games from different developers, and the quality of these games have noticeably varied.  I started off the month reviewing a decent game, then I followed it up with a review of a game that was subpar, and the last game I'm reviewing is good.  The developer of this game is Wayforward Studios, who are best known for their Shantae and Mighty Switch games, but the studio has also create games based off of established properties.  These include the 2009 Wii remake of A Boy and His Blob, Batman: The Brave and the Bold for both the Wii and DS, and this game.

Summarizing Aliens: Infestation's plot will be tricky as it is very similar to the plot of Aliens: Colonial Marines, with a few exceptions.  The similarities start with the fact that the game is set a few weeks after the events of Alien 3, and a platoon of marines on the U.S.S. Sephora has been dispatched to find the Sulaco.  However, unlike in Colonial Marines, where the marines found the Sulaco drifting near LV-426; in Aliens: Infestation, the ship is just drifting around in space, and they're not here because of a distress beacon sent by Corporal Hicks; instead, they're checking for any survivors that may be onboard after learning about what transpired on LV-426 in Aliens.

When the marines arrive on the Sulaco, there are no survivors to be found, but while the marines are searching the ship they encounter combat androids owned by the UPP, or Union of Progressive People.  This group is actually a reference to a concept from an unused draft of Alien 3's story.
While fending off combat androids, the marines find a single human survivor that's about to be attacked by an xenomorph, but she escapes, and it turns out that there are also xenomorphs running loose on the Sulaco as well.  This was the result of the UPP, and not Weyland-Yutani, who do show up halfway through the game after the marines deal with the UPP on LV-426.

Much like Colonial Marines' story, Aliens: Infestation's story starts out on a promising note, but after the initial promise, it quickly devolves into an uninteresting tale with a lack of compelling moments.  The story never throws out any plot twists to try and keep you interested in the narrative; however, the story does feature better characters than the ones in Colonial Marines.  Each of the marines you either play as or encounter are fairly likeable and depending on who you're currently playing as when conversing with other characters; they have their own unique responses to what other characters are saying to them.  Also, the game sends you to a variety of different locations over the course of the game, including the Sulaco, LV-426, and in one level, you travel to one of the moons of Mars, Phobos.  Though you also revisit previously explored locations on multiple occasions, such as the Sulaco.

Whereas the previous Alien games I reviewed were first person shooters, Aliens: Infestation is a sidescrolling, action-adventure game in the vein of games such as Metroid, which is ironic, as the first two Alien movies were an inspiration for the creation of Metroid.  Similar to Metroid, exploration is a key part of this game; in every level you're given an objective and it's up to you to find your way towards the objective in order to complete it.  Sometimes, however, certain areas are inaccessible and require a certain device or tool in order to progress onwards.  For example, some rooms in the levels are completely dark, but once you find a shoulder lamp, you can explore the previously unexplorable areas.  Additionally, exploring levels will often result in the discovery of weapons, items, or marines that will help you in the long run.  By blasting open vents with a grenade, you can explore maintenance tunnels that may or may not contain either health, ammo, or lead you to your current objective.

One interesting aspect of this game is its usage of lives.  When you start the game, there are four different marines to choose from and you can swap between them at any time when you're in a save room.  However, these marines also act as lives, if one of them dies in a fight, they're dead for good; fortunately, you can find new marines over the course of the game to fill in the missing gaps.  Though aside from each marine having their own personalities as well as their own idle animations whenever they're in a save room, none of them have their own special abilities or something that makes the marines play differently from each other.

The variety of weapons is pretty standard, at the beginning of the game you have a pulse rifle and a pistol, and over the course of the game you'll acquire a shotgun, the flamethrower, and the smartgun, but you can find upgrade modules hidden in each level that will increase the strength of the weapon you have currently equipped.  The combat itself is very fun, firefight with the xenomorphs are fun and tense and the human enemies you'll sometimes fight introduce a unique idea that has rarely been tried in a sidescroller, and that's the ability to take cover.  It may not sound like much, but this is useful for avoiding gunfire from either the UPP or Weyland-Yutani soldiers.  The boss fights are also fun as well, and unlike in Aliens vs. Predator and Aliens: Colonial Marines, the fight against the Queen Alien doesn't suck.  However, some enemies and bosses can get cheap in their attacks, which will often result in huge chunks of health getting lost.  Keep in mind, the game is never too hard nor is it easy, the difficulty and challenge feel fair.

Visually, the 2D graphics look nice.  Wayforward Studios is known for creating really good 2D graphics, and this game is no exception.  Not only that, but the game manages to build up a nice amount of tension in some parts of the game.  The sound is also good, the weapons sound great, especially the smartgun, which has a cool firing sound effect.  There isn't much music in the game, and while the music is good, it can get annoying hearing certain tracks over and over in a level.

Out of the three Alien games I reviewed this month, this one was easily the best of the bunch.  While the story may be forgettable and it's not a long game, taking about three to five hours to beat, this is made up by the fact that the game is fun to play and if you're looking for a good Aliens game or just a good sidescroller, this is a good choice.