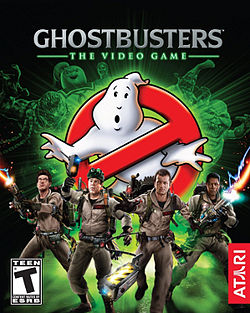 Ghostbusters is one of the greatest movies ever made; it successfully combined elements of comedy and fantasy together into a movie about three scientists, later joined by a fourth member, who decide to go into the business of catching ghosts, only to later find themselves taking on the supernatural forces of evil.  Unfortunately, the games based off of the movie and its sequel aren't that good, and it seemed like this would be the accepted quality of Ghostbusters games.  That changed in 2009, when Terminal Reality created a game that finally did the Ghostbusters name justice in video games, while also acting as the third movie we had never gotten.

The plot is set two years after the events of the second movie, business for the Ghostbusters has been going strong, and as an unnamed and silent protagonist referred to as the Rookie, you are hired by the Ghostbusters.  However, a supernatural shockwave that came the Museum of Natural History surges through New York City, which results in Slimer, one of the first ghosts the Ghostbusters captured, escaping his holding unit and returning to the Sedgwick Hotel.  After re-capturing Slimer, the Ghostbusters figure that something big must be happening when the Stay Puft marshmallow man reappears, even though he was defeated in the first movie.  Eventually, the Ghostbusters rescue a woman named Ilyssa who is a researcher of Gozerian artifacts.  She is currently looking into the works of Ivo Shandor, a deceased architect who led a cult of Gozer worshippers back when he was alive.  Soon, it becomes apparent to our heroes that something or someone is trying to bring about the destruction of the world, and now they must find out the truth behind things and put a stop to this potential cataclysmic event.

The story in this game is very good, in particular, I like how it takes certain plot points and characters from the previous movies, and expands on them or ties the connective tissue between both movies.  We learn a lot more about the character Ivo Shandor, who was briefly mentioned in the first movie, and that he did some renovations to other key locations from the movies such as the Sedgwick Hotel and the New York Public Library.  Additionally, we also find out where the mood slime from Ghostbusters 2 came from and how it ties into the first movie.  The game's plot definitely feels like the third movie that was talked about for a long time, but nothing ever came to fruition.

The game is a third-person shooter, but what makes it unique from other games in the genre is the ghostbusting aspect of the movies, and its also what makes the game fun to play.  Fighting ghosts is simple: first you weaken the with your proton pack and once they're health drops to a certain point you can wrangle the ghost and slam it around the environment to weaken it further, then you deploy a ghost trap to catch the ghost.  Blasting and capturing ghosts never gets old due to the variety of specters you face during the game and because the game also introduces new equipment for you to use.  Besides ghosts, other enemies you encounter in the game include stone gargoyles, which require you to use your capture stream to wrangle and slam them into the ground, flying projectiles such as books and kitchen utensils, and larger enemies that require you to weaken them before you can wrangle their energy source out.  Though there are some enemies, as well as bosses, that can only be weakened with a certain beam besides the proton stream.

Over the course of the game, you'll acquire new beams for the proton pack including the shock blast, a shotgun-esque weapon, the meson collider, which can fire rapid-firing projectiles, and the slime blower, which is used to get rid of black slime and free people that have been possessed by a possessor, a type of ghost in the game.  Each of these weapons has an alternate firing mode, the shock blast gets a stasis stream, the meson collider can fire a blast of energy that acts as a targeting beacon for the rapid-fire projectiles, and the slime blower, has the slime tether, which can tether itself to different objects.  As I mentioned earlier, certain enemies and bosses can only be weakened with a particular weapon, one example are black slime spirits you encounter that can only be defeated with the slime blower.

At a few points in the game, the weapons are used for some light puzzle solving, so you're not always just using them to blast and capture ghosts.  In one level, you come across a room that is flooded with black slime, so you need to find two weights and use the slime tether to lower them, causing the floodgate to drop and the slime to drain, allowing you to continue on.

By capturing ghosts, scanning them with the PKE meter, which can also be used to find hidden collectibles in each level, you earn money, which is used to buy upgrades for the proton pack.  These upgrades vary and their effects include decreasing the amount of time it takes for one of the beams to overheat, or increasing their rate of fire or damage.

Visually, the game looks good, and the art style of the game allows for some interesting level designs, particularly for the ghost world levels.  The game isn't necessarily scary but some sections of the game do have a creepy atmosphere to them, such as one part in the library level where you go into the children's section, and then things become downright creepy and unsettling.

The four actors who played the Ghostbusters: Dan Aykroyd, Harold Ramis, Bill Murray, and Ernie Hudson, all reprise their roles, playing their respective characters.  A couple of other actors from the movies return as well, such as Annie Potts, who reprises her role as Janine, the Ghostbusters' receptionist, and William Atherton, who plays the jerk of a lawyer named Walter Peck.  Most of the performances are great, with the only exception being Bill Murray's performance, which is just decent.  This is because most of the time he either sounds disinterested or he's mumbling out his lines.  The music, while lifted from the first movie, is still very good.

Hold on there, I'm not done reviewing this game yet as in the second part of this review, I'll be reviewing the Nintendo Wii version of this game.

Posted by William Lowery at 8:34 AM