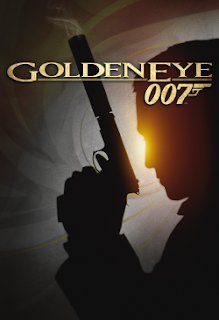 Of all the reviews I have written so far, this is one of the trickier reviews I have written, why?  While it is a game based off of a movie, it also happens to be a remake of said movie that this game is based off of.  With that in mind, is Goldeneye 007 for the Wii still a good game?  Yes, most definitely.
The story for this game follows the plot of the move, but with some changes made to both the cast of characters in the movie as well as certain plot points.  Pierce Brosnan, who played James Bond in the movie, has been replaced by current Bond actor Daniel Craig, and Sean Bean, who played the villain Alec Trevelyan, has also been swapped out for someone else.  The same applies to the rest of the characters from the film as well, including Natalya, General Ouromov, and Xenia.  The game's story largely follows the plot of the movie; James Bond and then MI6 agent Alec Trevelyan are infiltrating a weapons factory in Russia to stop the development of nuclear weapons.  During the mission, however, Trevelyan is captured by General Ourumov, who executes him.  Bond escapes and later on in the game we find out that Trevelyan is still alive and has taken control of the Goldeneye satellite to use for his own purposes.
Where the game differs from the movie is the reason behind why Trevelyan hijacked control of the satellite.  In the movie, he wants to use the satellite to exact revenge on MI6; in the remake, he's trying to steal bank records, and after he steals the data, Trevelyan will use the Goldeneye satellite to wipe away the evidence.  Despite the updates that have been made to the story, it is still a solid tale and compelling enough to keep players interested.
There are three different controller options to choose from in this game: the Wii Remote and Nunchuck, the Classic Controller, and the Gamecube controller.  I used the Wii Remote and Nunchuck combination, which works great, though I would recommend increasing the aiming sensitivity a little bit before playing, but otherwise, the controls were fairly smooth.
The gameplay is a mixture of first person run and gun action and stealth.  In most levels, you're given the option of either sneaking around, stealthily eliminating enemies or going in, guns a blazing.  However, it's best recommended that you use stealth as much as possible because enemies will put up a fight if you get spotted; they'll call in reinforcements and do their best to try and take you down.  It's fun, and it can get kind of tense sneaking around, trying to take out enemies without alerting the attention of other enemies.  Bond can carry two additional weapons with him besides his silenced pistol, which he always has with him.  There are a good variety of weapons to use in each level, and some guns may have additional attachments attached to them such as a silencer or some kind of scope. Bond also carries around a gadget with him, an all purpose smartphone that has a variety of different functions including acting as a hacking device, a facial identifier, or a tracking device.
If you play the game on Normal or any of the higher difficulties, most levels will contain additional objectives that you must complete.  Failing to complete one of the additional objectives will result in the game automatically lowering the difficulty for the next mission and onwards.  However, I feel that this is slightly punishing because of advancing in the story you end up having to replay the mission again, just to make sure you fully complete the additional objective you may have missed.
The other problem I have with the game, besides the penalty for failing to complete additional objectives in a level, is the final boss fight in the game.  He's a bit of a bullet sponge, taking a lot of ammo clips to defeat, but there's also the fact that once you weaken him to a certain point, he calls in reinforcements, and it results in some slight frustration as you try to defeat him and make sure that the soldiers don't kill you.
The game's visuals look great and this is one of the best looking games on the Wii.  Equally great is the sound, all of the actors do a great job, particularly Daniel Craig as James Bond, and the music is also good as well.
Even though it shares the same name of a movie, this re-interpretation is still a great game and one of the best games available for the Wii.
Final Score: 9/10

Posted by William Lowery at 8:43 AM No comments:

Hello there people, May is now upon us and right now things are going good for me.  My last day of high school was yesterday, and my graduation is next Friday.  While it is weird knowing that I'll be leaving a place that was a remarkable experience, at the same time it does feel satisfying knowing that I'm done with high school and now I get to move on to the next level: college.

In terms of reviews for this month, currently I'm working on the review for the Wii remake of Goldeneye 007, which should be posted sometime in the next few days, you can also expect reviews of No More Heroes 1 & 2 this month as well as a review of Mass Effect 2, a game I'm still finishing up, but it will get reviewed this month.  Of course, next month sees the return of the big video game convention known as E3, and with it, a lot of games, and I do plan on doing my own personal Top 10 list of favorite games from the convention, so you can expect that as well.

That about covers it  in terms of updates for the blog, till then, later.

Posted by William Lowery at 5:18 PM No comments: 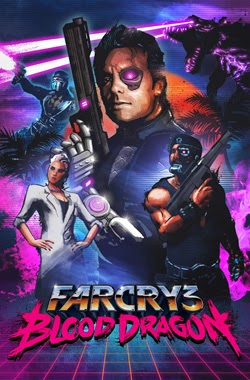 REVIEW ORIGINALLY POSTED TO GAMEFAQS ON: April 2, 2015
In case you don't know, Far Cry 3 is an excellent game, but what would happen if you took the gameplay and visuals of the game, and painted a coat of the 1980's over it?  You would get Far Cry 3: Blood Dragon, an awesome downloadable game.
Set in the distant future of 2007, the world has been partially devastated by nuclear attacks and Vietnam War 2.  Sergeant Rex Power Colt, a veteran of the war, has been resurrected as a Mark IV Cyber Commando.  With his best friend, Spider, the two of them head to the mysterious Blood Island after word got out that Colonel Sloan may be hiding there.  It isn't before long that while attacking Sloan's base, the two of them get captured and Spider is killed right before Rex's eyes by Sloan.  Now, it is up to Rex Power Colt to avenge Spider's death and stop Sloan's plans to cause an all out nuclear war.
Blood Dragon's story is silly and entertaining, and the game is very much aware of that.  The story and writing poke fun at video games, the 1980's culture, and films of the decade like Robocop, Aliens, and The Terminator.  While some of the references in the game may fly over your head, a lot of the humor in this game will make you laugh hard.  Besides that, some story moments, particularly the final act, will leave your jaw dropped on the floor due to the awesomeness happening onscreen.  I won't spoil anything, but I will say that during the final act, there is a training montage, and Rex will get his hands on an ultra powerful laser called the Killstar.
Also, it goes without saying that the main character, Sergeant Rex Power Colt, is one of the coolest characters ever to appear in a game to date.  From his cheesy but awesome one liners to the way he reloads or equips some of his guns; everything about the character feels like a combination of characteristics from action stars of the 1980's, and frankly, that's just plain awesome.
The same great gameplay from Far Cry 3 has carried over into Blood Dragon.  You'll be completing missions, liberating outposts controlled by Sloan's cyber-soldiers, and finding collectibles that include VHS tapes and TV sets.  Some changes have been made to this downloadable game, some of which involve Rex Power Colt himself.  Unlike Far Cry 3 protagonist Jason Brody, Rex is able to sprint really fast, jump higher than a normal human, and he can withstand falling from great heights.  In addition, he also has all four weapon slots available at the beginning of the game as well as a couple of advanced takedowns to perform that were unlockable skills in Far Cry 3.  Other aspects of Far Cry 3's gameplay, such as climbing radio towers or hunting animals in order to craft different stuff, are not in this game or in the case of the RPG aspects from Far Cry 3, have been simplified.  When Rex levels up, he either learns a new move, gains some sort of damage resistance, or his overall health increases, rather than have different skill trees wit different skills.
Rex also has access to a good variety of firearms, including Robocop's pistol, a machine gun, shotgun, and a sniper rifle.  Over the course of the game, he'll also obtain a minigun, flamethrower, and the all powerful Killstar.  Most of these weapons have attachments that can be applied to them including less recoil, faster fire rates, extended magazines, or more crazier attachments like one that makes his shotgun become a quadrupled barrel shotgun, and another one that makes his machine gun fire laser rounds.  These attachments can be unlocked for purchase by completing side missions or finding collectibles scattered around the island.
While the game reuses enemy types and most of the wildlife from Far Cry 3, albeit with a cyber makeover, the one new creature that has been added is the titular Blood Dragon.  A blind dinosaur that's attracted to sound and the smell of cyber hearts extracted from cyber-soldiers, the Blood Dragons can be hard to kill (unless you have the Killstar), but thee creatures can be used to your advantage as if one of them is lured to an outpost guarded by cyber-soldiers, it can cause major carnage.
Visually, the game looks similar to Far Cry 3, in other words, it looks great.  Though as stated earlier, the enemies and wildlife, as well as the environemt, have all been given redesigns to reflect the science fiction vibe of the game.  The skies are now always cloudy with lightning flashes from time to time.  In addition, the cutscenes in this game are animated and done in a style similar to that of cutscenes from 8-bit games like Ninja Gaiden.
Voice acting, like the story and writing, is equally silly and entertaining, in particular, actor Michael Biehn (Aliens, The Terminator) gives a great performance as the main protagonist, Rex Power Colt.  The music in this game is awesome, every track is rocking/ominous synth and guitar riffs which are memorable and will always stick inside your head.
Much like Far Cry 3, Far Cry 3: Blood Dragon is an excellent game, but what makes it stand out is the laugh out loud story and writing that pokes fun at and spoofs stuff from the 80's, as well as featuring the gameplay that made Far Cry 3 so fun.
Final Score: 9/10
Link to Gamefaqs Review: http://www.gamefaqs.com/xbox360/710754-far-cry-3-blood-dragon/reviews/review-160402
Posted by William Lowery at 6:30 PM No comments: