Destroy All Humans! Path of the Furon Review 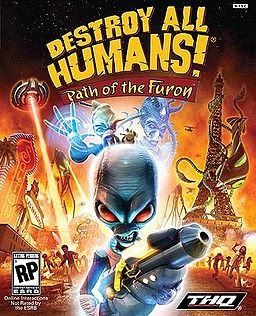 In 2008, two new installments in the Destroy All Humans series were released, this game and the Wii exclusive Big Willy Unleashed.  The latter was a decent installment that was enjoyable, but suffered from some noticeable problems such as a short length, bad graphics, and underutilization of the new vehicle, the Big Willy robot.  So how does this fourth installment fare?

Set some time after the events of Big Willy Unleashed, Pox and Crypto have left the fast food industry and moved into the gambling industry, opening up a casino in the faux Las Vegas town of Los Paradiso that serves as a means to steal peoples' cash as well as their brain stems.  Everything is going fine for the duo until the local mafia decides to start a war with Crypto, but then things take an out of this world turn.  A once thought extinct race of cyborgs known as the Nexos show up, which results in our duo leaving Paradiso to try and figure out why the Nexos are back, and who sent them to sabotage the DNA harvesting scheme.  The story is better this time thanks to the whole conspiracy angle the story goes for, which does keep your interest as our alien duo try to figure out things.  Most of the characters in the story are enjoyable, such as our protagonists Pox and Crypto, but there are some that aren't as interesting, and just show up only to never be seen again in the game.

The gameplay is largely the same in this installment, but some new improvements and additions have been made to the experience.  The controls have been streamlined so that now you can use Crypto's mental abilities such as Psychokinesis and his guns at the same time, or maybe a combination of his jetpack, PK, and weapons together.  This allows for a lot more freedom with how you use his abilities and weapons than it did in previous installments.

Besides the streamlined controls, Crypto also gets some new weapons and mental abilities to use as well.  A few of the new weapons include one which launches a giant plant monster called the Venus Human Trap, which will grab any nearby vehicles or humans and eat them, another one called the Black Hole Gun, which is self explanatory, and the Superballer, which can launch bouncing balls that will stick to a nearby human or vehicle and bounce it all over the place.  Certain weapons from previous entries do return such as the Zap-o-Matic, Distenagrator Ray, Ion Detonator, and Anal Probe, the latter two have undergone some slight modifications as now the Ion Detonator can be used as a sticky bomb while the Anal Probe now has lock on capabilities.  In terms of new mental abilities there are two of them this time, Temporal Fist is an ability that stops time, allowing you to use PK to rearrange any objects in the vicinity and then unpause time to cause a chain reaction of events.  PK Magnet allows Crypto to gather any nearby humans or objects into a psychokinetic ball, and then throw them.  All of these new weapons and abilities are fun to use but they can also lead to problems in the gameplay, but I'll get to that later.

As always there's a good amount of mission variety and fortunately the game does have a longer length than it's predecessor, as it took me about 8-9 hours to beat the game, and an additional hour to finish up side missions and fully upgrade my weapons and abilities.  Speaking of which, the upgrade system has been heavily improved in this installment.  The only thing you need to worry here is making sure you have the right amount of DNA in order to upgrade your weapons.

While the gameplay is enjoyable there are some problems.  For starters, the enemy AI is terrible, the cops and soldiers in this game have aim that's about as good as a Stormtrooper's aim, meaning they often miss their shots more than they actually hit you.  The boss fights in this game are also too easy, while they do have interesting designs; the main strategy to defeating most of them is to pump a whole lot of Distenagrator shots into them.  As I said earlier, while the weapons and abilities, both old and new, are fun to use, by the time you fully upgrade them the game becomes too easy, providing no real challenge whatsoever.

These complaints with the gameplay lead me to my main problem with the game, the overall lack of polish the game has.  Graphically the game looks average, while the environments have a good sense of scale to them and some aspects such as the building destruction, weapon effects, and some character models look decent; the game suffers from a huge amount of pop-in, some occasional framerate drops, and muddy textures.  There's also a very strange thing that happens whenever Crypto engages in conversation with another person, for some reason all of the cars and people just disappear, save for objects, as if the people of the town wanted to make sure that Crypto and the person had their time to talk.

The game also has a few glitches; sometimes you may get stuck in the ground but then there are more strangers ones such as the fact that if you PK an object that isn't a car and throw it at a human or enemy, it just passes through them.  Also, on occasion but not frequently, the game will freeze.

Voice acting in this game is solid, Grant Albrecht and Richard Horvitz return to voice Crypto and Pox and their performances are easily the high point of the voice acting in this game; though as stated before the rest of the cast does a good job as well.  The music is also solid as well, featuring a good integration of licensed music during some of the missions.

If you can overlook some of the gameplay and technical problems the game has, it's still an enjoyable game.  Fans of the series should give this game a look, and for everyone else it's still a decent game to play.

Posted by William Lowery at 6:32 PM